Continue Reading the Delightful Series from Cynthia Wright: Rakes and Rebels with HER HUSBAND, THE RAKE

Posted on January 28, 2020 by eileendandashi 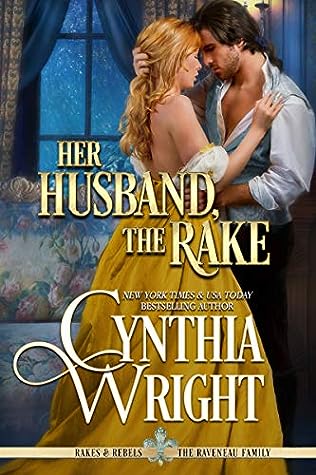 From a New York Times bestselling author comes a Raveneau Family novella you’ll savor!
“And they lived happily ever after…”
Or did they?

Can a rake like André Raveneau truly be tamed into a domesticated husband and father…or will he remain a pacing tiger, destined to break free of his cage?

Come into the Raveneaus’ Connecticut home, as Devon struggles to balance the needs of her little children with the demands of a restless, hot-blooded husband. When two people reappear from the past, long-suppressed fears ignite, and St. Valentine’s Day becomes a time of reckoning for André and Devon Raveneau.

Can this marriage, between two passionate and stubborn people, be saved?

My Thoughts:  The character development of each major player  in Cynthia Wright’s work is superbly crafted.  I quickly become attached to the characters, concerned for their well-being.

This is reaffirmed in Her Husband, a Rake.  Book one introduces Andre and Devon. If you haven’t read it, try to before you read this one. If you can’t, it is also fine. Each of her books are standalone, but I think you’ll enjoy book two even more if you are introduced to the rake Andre (his background) and how he captured Devon’s heart.

I’ve also listened to the audiobook of book one and books two’s audio is already out, so if you prefer to listen to Tim Campbell narrate the novella, you are in for a treat.  He has a divine way of telling the story. Incidentally, I love his voice for Andre (French accent). Sample of audio

Wright must have a wonderful sense of humor because I can always anticipate scenes which will have me smiling. Andre and Devon are both characters you will love as Devon is challenged with doubts about her relationship with Andre, or more succintly put, his love for her and the children.

Marriage can be rocky at times with the demands of child rearing. They can be made worse with an unexpected visit from a manipulative mother who isn’t very pleased with her daughter’s choice of a husband. Deborah Lindsay Nicholson will have you rolling your eyes!

Deborah Lindsay Nicholson, brings with her an agenda of her own, reintroducing to her daughter her previous beau who has become a very rich man and still pines after Devon. Divorce for women who marry the wrong man is easily done in the states since the rules became lax after cutting with the Mother country, or so she puts to her daughter.

Morgan Gadwin, the fortunate or unfortunate beau in question, tries his best to woo Devon. It can’t come at a worse time because Andre hasn’t been very attentive to Devon as of late. He spends more time than usual away from the house, late hours in the library alone, and doesn’t often remember to kiss the children goodnight. All of this has Devon questioning whether he has fallen out of love. Her heart is vulnerable.

I like the characterization of Morgan Gadwin. He has many points to his favor. But Andre has a hard time not smashing his face when he sees him with Devon. Andre’s flaw is he hides the depth of his feelings for Devon and has guarded his heart from the possible pain love can inflict.

In the outcome, Deborah, Devon’s mother, understands her son-in-law better than before. Morgan finally realizes he is still runner up to reach Devon’s heart. Andre lets his guard down where Devon is concerned and claims his rightful place within his family. Devon learns the biggest lesson of all—the doors of communication should never be closed.  But it’s how they all arrive to these conclusions which will keep you entertained and bewitched!

I am a lover of books, both reading and writing. 2018 marks the beginning of my own journey from writer to published author. This blog will showcase various authors' thoughts on the elements of novel crafting, and my attempts to find my voice in writing. While journaling this journey, I hope to encourage others to follow their dreams. Book reviews continue as I have the last four years, only making time for my new pursuits.
View all posts by eileendandashi →
This entry was posted in Book Reviews, Historical Romance, New Book Release, Novella, Regency Romance, Romance and tagged 5-Star Book Review, Cynthia Wright, Her Husband, Rakes and Rebels Series, the Rake. Bookmark the permalink.