Posted on August 8, 2019 by eileendandashi 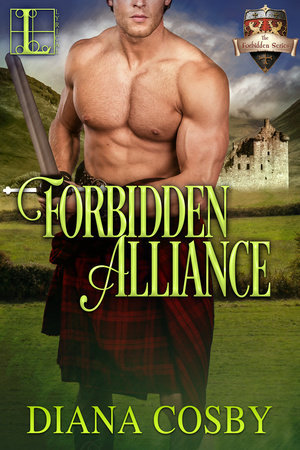 Bound by revenge, a woman turned outlaw and a knight sworn to reclaim his birthright band together to vanquish an enemy of Scotland …

After her family is slain and her home seized, Elspet McReynolds flees into the forests surrounding Tiran Castle, where she resorts to thievery to survive and save her sole remaining kin. There she finds an unexpected protector and ally in Sir Cailin MacHugh, rightful heir to the earldom of Dalkirk–a noble rumored to have perished at sea . . .

Sir Cailin owes his life to the Brotherhood for saving him from a murderous plot. But what is the Knight Templar to do about the fearless, sword-wielding beauty who has enlisted his aid–and awakened his desire? In the face of devastating betrayals and traitorous enemies closing in, can Cailin and Elspet dare claim a love that makes no promises–for a future they may not live to see?

This is a story of two evenly matched people, both fighting for what they believe is right when destiny decides their paths to cross.

Elspet seeks to free her brother from the Earl of Dalkirk. The earl is a wicked man and will not stop to get all he wants, yes, even his earldom. Elspet lost her mother and father by his hands. Desperate and naïve she trusts a guard of Tiran Castle to help her free her brother. Her problem? She hasn’t coin to pay him. She turns thief.

Elspet doesn’t have luck stealing. Her first forage ends very close to rape. Her second she pulls off, but has a change of heart. That change of heart changes her life.

Sir Cailin, still very much a Templar Knight, even after the knighthood was dissovled, seeks his birthright, to regain his claim as the Earl of Dalkirk. His uncle has taken the title after killing Cailin’s mother and father and got of Cailin.

He meets a fiery lassie with an agenda of her own. His Templar instincts kick in — to protect her when he finds her fending off some men.  Elspet doesn’t need to be protected as much as he thinks. She’s quite the warrior. Keeping her out of his bed, however, becomes increasingly difficult as they work together, she to achieve her goal to save her brother and he to regain Tiernan castle.

Author Diana Cosby wields her pen as deftly as Sir Cailin does his sword. She interlaces a historical setting of danger with tender, blossoming love.  Her characters and their challenges drive the power of the telling. Scenes of love making don’t get in the way of the story, rather they contribute to the understanding that flows between Sir Cailin and Elspet. Cosby’s choice of words describing the feelings between the two was poetic.

I loved the read with its fast-paced and meaningful dialogue, its boldly descriptive scenes, and its characters, each with difficult and very believable inner conflicts, pulling at my heart strings.

I am a lover of books, both reading and writing. 2018 marks the beginning of my own journey from writer to published author. This blog will showcase various authors' thoughts on the elements of novel crafting, and my attempts to find my voice in writing. While journaling this journey, I hope to encourage others to follow their dreams. Book reviews continue as I have the last four years, only making time for my new pursuits.
View all posts by eileendandashi →
This entry was posted in Action/Adventure, Book Reviews, Highland Romance, Highland Stories, Historical Romance, Medieval Romance, New Book Release and tagged 5-Star Book Review, Diana Cosby, Forbidden Alliance, Medieval Historical Romance, The Forbidden Series. Bookmark the permalink.