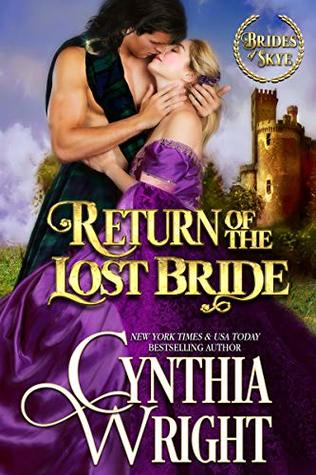 Brides of Skye Series:
Abducted at the Altar
Return of the Lost Bride

Darkly handsome Ciaran MacLeod revels in his life as a Highland warrior. By day, he trains with his comrades at Duntulm Castle on the far cliffs of the Isle of Skye, and by night he takes his pick of smitten lasses.

However, Ciaran harbors a family secret that makes him deeply suspicious of love. He’s grateful he doesn’t have to worry about taking a wife, for the castle is efficiently run by Violette, a plain young Frenchwoman who hides under a dowdy gable hood and reveals nothing of her own past.

Violette Pasquiére fled to Scotland to escape a predatory stepfather. On the remote Isle of Skye, she feels safe, tending to the strong Clan MacLeod men who would be lost without her care. The potent attraction Violette feels for Ciaran MacLeod is just one more secret she keeps.

But a threat to Duntulm Castle changes everything, and Ciaran’s elders’ pressure him to make a marriage alliance that will benefit the clan. Rebelling against their efforts to control him, Ciaran impulsively proposes to Violette instead, setting in motion a passionate series of events that shake not only their future, but challenge their carefully guarded hearts…

It was easy for me to attach myself to Violette Pasquiere. We met her briefly in book one of the series. She appears docile, withdrawn and extremely efficient in running the household for the MacLeod men. Fear makes her appear that way and fear keeps her thus.

Her French ancestry, and her beauty are hard to conceal, however much she tries. She is a strikingly beautiful woman who conceals her golden tresses under an ugly headdress. Why is she hiding? If her stepfather were to discover her whereabouts, he may come seeking her and Violette would rather die than do what he intends for her. She is betrothed to an odious man, one her stepfather chooses, as odious as he himself is. Her younger life, living in the household of her stepfather left deep scars. She fears she’s marked for life.

When the MacLeod clan leaders are requested to appear before the King in Edinburgh, she is obliged to go with them.

Ciaran is a sensitive man and has enjoyed having Violette part of the family during the last year, even though she is only the housekeeper. He decided she should join them in Edinburgh, thinking to give her a good time, being she is cultured and well-spoken. He thought she would be most comfortable as nurse to his grandfather. Her life story in France somehow doesn’t ring true, making him even more inquisitive about her.

Although Violette’s keeps Ciaran distant, she is charmed by his flirtatious ways and sweet disposition. She dare not let it go beyond affection. This, too, she keeps secret. But as things work out, it would have been better had she stayed in Skye and not gone to Edinburgh. Her disguise as Alastair Crotach’s nurse didn’t hide her beauty nor who she used to be.

Violette is discovered by her betrothed in Edinburgh. Her worst fears come back to haunt her. She panics.  What to do?

Ciaran takes spotlight in Edinburgh when the MacRae clan see an opportunity to merge the families by marrying Judith MacRae to Ciaran. Ciaran panics.  What to do?

The story evolves from this crucial point, with some laughable moments as I anticipte in any book penned by Cynthia Wright.

Magnus, Ciaran’s father is an interesting character, as is his father.  I appreciate how much time the author takes to mold and flesh out these men, flaws and all. Both of them add more dimension to the story.

I am a lover of books, both reading and writing. 2018 marks the beginning of my own journey from writer to published author. This blog will showcase various authors' thoughts on the elements of novel crafting, and my attempts to find my voice in writing. While journaling this journey, I hope to encourage others to follow their dreams. Book reviews continue as I have the last four years, only making time for my new pursuits.
View all posts by eileendandashi →
This entry was posted in Book Reviews, Highland Romance, Highland Stories, Historical Romance and tagged 5-Star Book Review, Brides of Skye Series, Cynthia Wright, Return of the Lost Bride. Bookmark the permalink.