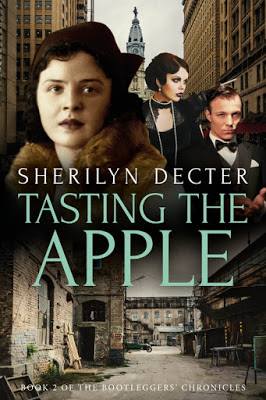 When you hear the word Prohibition, you have images of Flappers, gangsters, and jazz–at least I do. But there was also a lot of mystery in the Roaring 20s. Today we get a chance to see how the ghost of a policeman helps a widow deal with criminal elements.

Author Sherilyn Decter is visiting today to share her latest release, TASTING THE APPLE, the second installment in her Bootleggers’ Chronicles. She also has an exciting giveaway she’s hosting for the tour. Be sure to check it out at the end of the post.

Before you leave us today, I hope you read my review below. I don’t believe I’ve ever read a story set in the 1920s focusing on how the Prohibition affected the society.

A young widow on the edge. A policeman back from the dead. Together, can they take down the city’s most notorious bootlegger?

Philadelphia, 1925. With a son to raise and boarders to feed, Maggie Barnes is at her wit’s end. But when a criminal element infiltrates the police force, the single mother puts her cares aside to help. As she tries to dig up dirt on bootlegger mastermind Mickey Duffey, Maggie realizes she can’t take on the case alone…

Inspector Frank Geyer used to patrol the streets of Philadelphia before Maggie was born. As he attempts to clean up crime from beyond the grave, the spirit uses his Victorian sensibilities to fight back against lawbreakers. But with corruption throughout the police force, can the phantom informant save his city and Maggie’s livelihood?

With the roof leaking and the lawlessness spiraling, Maggie and Frank have one chance to take down a criminal and prevent the unthinkable…

The Roaring Twenties and Prohibition were a fantasy land, coming right after the horrors and social upheaval of World War I. Even a century later, it all seems so exotic.

Women got the vote, started working outside the home, and (horrors!) smoked and drank in public places. They even went on unchaperoned dates (gasp)!

Corsets were thrown into the back of the closets, and shoes were discovered to be an addictive fashion accessory after hemlines started to rise. And thanks to Prohibition, suddenly it was fashionable to break the law.

The music was made in America– ragtime, delta blues, and of course jazz. Cocktails were created to hide the taste of the bathtub gin. Flappers were dancing, beads and fringes flying. Fedoras were tipped. And everyone was riding around in automobiles (aka struggle buggies and I leave it to your imagination why– wink.)

Bootleggers’ Chronicles grew out of that fascination. Writing as Sherilyn Decter, I will eventually have a series of historical crime fiction novels dealing with the bootleggers, gangsters, flappers, and general lawlessness that defined Prohibition. The Bootlegger blog rose out of all the research that I’ve been doing about this incredible era.

Growing up on the prairies and living next to the ocean, I am a creature of endless horizons. Writing allows me to discover what’s just over the next one. My husband and I have three amazing daughters, a spoiled grandson, and two bad dogs.

Sherilyn Decter is enthralled with the flashing flappers and dangerous bootleggers from the Roaring Twenties and Prohibition. Through meticulous research, that lawless era is brought to life. Living in a century-old house, maybe the creaking pipes whisper stories in her ear.

If you want to learn more about the  Bootlegger’s Chronicles, you can reach Sherilyn at the following links:

My Review:  My usual read is full of action–this one is full of depth of understanding the web people are caught in.  At first, the story unfolded slowly, albeit interestingly.  It gave me a chance to absorb the climate of the Prohibition days — the corruption which spread rampant throughout the community, from top officials to the guy doing the dirty work.

Since I love the supernatural, author Decter’s touch of the ghostly Frank adds a lot to the story — not only his apparent need to resolve an issue for which he can’t pass over to the other side, but his unfailingly wise counsel to the only person he’s found who sees him–Maggie Barnes.  Frank is helping to clean up the city.  He has nothing to lose for apparently he’s lost everything.  (grins)

Maggie wants the same, for she lost her husband to the corruption of the city. She is on a precipice of financial ruin.  She’s a single parent, a strong, intelligent woman, playing with fish bigger than she.  Can she manage to care for herself, her son and his education, with her sole means of support through the boarding house and her small earnings?  Her alternative is to swim with the fish in the pool of corruption.  Which is it to be?

I could see the research necessary to make this story authentic.  It drew my attention by that simple fact.  Decter wove the events of the story (Maggie’s determination to try to catch the bad guys) with the prevailing culture of its human tragedy, perfectly seamlessly.  I learned so much. Her flawed characters created a rich texture of emotion.

I commiserated with Maggie’s plight. I commiserated with Edith, Mike Duffy’s wife. The author made me feel compassion for women during that time.   Maggie wants to be loved for herself and be cared for by a man who values her for her talents. Edith is caught in the spokes of a man’s world of corruption and loose morals.

Temptation is looming. Can Maggie resist the temptation of swimming with the fish, lose her integrity and self-respect? Can Edith resist the lure of a man who promises her love?

Mickey Duffy, Edith’s husband, is also an interesting character who isn’t all he seems.  He has far more depth than it appears.

Under all the corruption, these people are real. They booze and blow to escape demons they live with.

I picked up on a theme, strong and clear.  As long as the arm which controls corruption does not keep you from your own illegal pursuits, your indignation for the wrongdoers holds true.  When it touches you, those of power and influence, it can not be tolerated.

If this is a time period you enjoy, you most definitely should read the book. If you love books with strong messages, this again will touch you.

In 1926, there are 16,000 speakeasies for the two million residents of Philadelphia. Crime, thanks to tommy guns and faster cars, is exploding—literally. Citizens are beginning to panic because of the violence, and politicians are using their bully pulpits to get ‘tough on crime’. The tip of the spear of these efforts are the city’s finest, the police.

Detective Tony Giordano is one of the few Italians in Philadelphia’s police force. Tall and dashing, with a killer smile, he comes from a long line of Giordano men who offer protection. Unlike his family who are members of the Honored Society known as the Cosa Nostra, he had decided, at a young age, to go in a different direction than Pops and Nonno. He wanted to see what life looked like from the other side of the street.

Ah yes, the other side of the street—which, it turned out, was not so good. As a cop, the money in his wallet was a pittance of his gangster brother’s thick wad. Certainly not enough to afford the car and clothes that make the man. So, he planted one foot on each side of the proverbial street, taking the policeman’s motto to serve and protect to an entrepreneurial level his family would be proud of.

In the grand tradition of Philadelphia’s finest, he’s a cop on the take.

Captain Copeland stops by Tony Giordano’s desk. It’s neat and well-ordered, much like Tony himself. He looks at his captain; only a flicker betrays his distaste at Copeland’s slovenly appearance. Taking advantage of the recent directive allowing police detectives to wear street clothes, Tony is dressed in a brown windowpane-checked three-piece suit, the pant leg creases sharp enough to slice bread. His silk tie is a glorious purple, and there’s a crisp black fedora perched on the back of his head. He’d rather die than wear the soiled uniform his captain wears, complete with food stains and missing buttons.

“Giordano, its Wednesday. Aren’t you supposed to be working the street? My pockets are feeling a bit light. Maybe see about fillin’ ‘em? Swing by and pick up Gus and Fingers and see what you can do about it.”

“Sure, Cap. I was thinking that it was getting around that time of the week myself.”

Author Sherilyn Decter is giving away an autographed paperback copy of TASTING THE APPLE and INNOCENCE LOST. Click on the Rafflecopter widget below and follow the instruction to enter. If you can’t see the widget, just click HERE.

Thanks for stopping by. Care to comment about what you think of when you hear the word Prohibition?  Perhaps depending upon your age, we’ll have an interesting array of answers.

I am a lover of books, both reading and writing. 2018 marks the beginning of my own journey from writer to published author. This blog will showcase various authors' thoughts on the elements of novel crafting, and my attempts to find my voice in writing. While journaling this journey, I hope to encourage others to follow their dreams. Book reviews continue as I have the last four years, only making time for my new pursuits.
View all posts by eileendandashi →
This entry was posted in Book Giveaway, Book Reviews, Historical Fiction, New Book Release, New Book Release Tour, Uncategorized and tagged Bootlegger's Chronicles, Sherilyn Decter. Bookmark the permalink.