Posted on February 17, 2019 by eileendandashi

Many of you know I am on my own journey of learning how to write a good novel.  Through the years, I’ve read some wonderful stories and then some not.  When a story just can’t be put down, I want to understand why.  What makes a great read?  Deciding to begin my study with dialogue, I have found learning about it fascinating.  Now when I read dialogue I understand just what it can add to the arsenal of tools a writer uses.

One component of writing a fictional book is dialogue.  Dialogue can make or break a reader’s interest.  It must add something to moving the story forward and without dialogue a story can be flat.  But what is really exciting about dialogue is there is so much a writer can put into dialogue. I’ve asked Diana Cosby to drop by today to talk about a few ways she uses dialogue. I appreciate her time and crafting skill.  Take it away, Diana!

Crafting a story is a fun challenge, one I think of like cooking.  You flavor the story with dialogue, internal, description and more.  Too much of one could ‘ruin’ the stew.  Like becoming a chef, an author must learn the effects of their writing tools and use each for the most impact.

Q:  How are character and dialogue intertwined?

A:  When writing, dialogue arises from how the character is feeling at that story moment and how they are affected by story events.

Q:  Do your characters swear?

A:  Yes, my characters swear.  The curse words are derived from medieval times:  Gods teeth, A swords wrath, Mary’s will, etc…

Q:  How difficult is it to write dialogue from ages past?

A:  For me, writing historical dialogue feels natural, no doubt due to my years of reading historical romance along with research.

Q:  How do you keep your dialogue from feeling stilted or contrived?

A:  To keep dialogue feeling natural, in addition to allowing it to arise from how the character is affected by story events, I read it out loud, which reveals where dialogue might need tightening to sound realistic to the reader.

Q:  What do you think about speech tags?

Example of dialogue with tag:  “This is important,” James said.

Example with action without tag:  James shoved the chair away.  “This is important.”

*In the example without a tag, in addition to the action identifying who is speaking, it establishes James is upset, which is further supported by the dialogue. 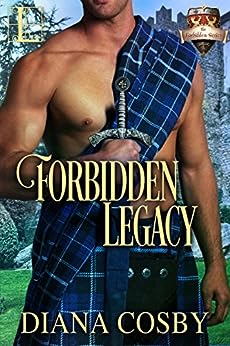 To show how I use dialogue, I’m sharing a scene from Forbidden Legacy, book #1 in The Forbidden Series.  At this point in the story, earlier in the day Katherine, our heroine, has agreed to the king’s condition and has wed a man she’s never met, Stephan, our hero, to reclaim her home.

I use a line of dialogue without a dialogue tag and due to the prior discussion, it’s clear to the reader who is speaking.  The dialogue is only three words as my hero is a man of war.  He doesn’t offer flowery words, but confronts issues head-on.

Furious he’d witnessed her weakness, she forced the images away, turned.  Unnerved by the intensity of her husband’s gaze, his sheer physical size, she stepped back.

Here, I place the reader in the heroine’s internal mode to allow them to see her upset along with building tension.

“You have naught to fear from me.”

Pulse racing, she took in the muscles carving his every inch.  Arms trained to wield a blade with deadly efficiency, or hold her until she bent to his will regardless of her pleas.  “Why should I believe you?” she asked, damning the inevitability of the next few hours, but determined to hold her own.  If he believed her weak, he would soon learn otherwise.  Though forced to wed, she was a noble in her own right.

Here, I again add internal dialogue to ratchet up tension, but this time I insert her dialogue.  I kept it short as she is a strong woman, and as like the hero, confronts issues head-on, which will provide wonderful sparks between them during the story.

“Because,” he said softly, “I give you my word as a knight that I will never harm you.”

“And that is supposed to reassure me?” she asked, her voice unsteady.

Katherine angled her chin, refusing to show fear.  “And, I dinna wish this union.”

Short dialogue is like intense bullets in writing.  It quickens the pace, and ups the tension.  As well, there’s something authors use called white space.  You’ll note that the more white space on a page in a novel, the faster the read.  The more words that fill a page, the slower the pace.

A wry smile flickered across his mouth.  “A point we both share.”  The smile fell away.  “Regardless of your or my opposition to our marriage, ’tis done.”

Confused, she paused.  “If you didna request this match, why would Robert Bruce mandate such?”

I placed the order of this sentence above in the natural progression in how we react, which is by feeling, action, then speech.

A chill swept her.  She rubbed her arms, each moment looming with the unspoken threat of their impending intimacy.  A personal relationship Katherine doubted she would ever welcome.

If she’d met Stephan in a less threatening venue, she would have been intrigued by his eyes that held secrets, the hard cut of his jaw framed with the shadow of a beard, and a stance of a man confident in his abilities.  Mayhap over time they could have become friends.  Except, naught was comforting about this moment, one where as her husband, he held the right to do as he wished.

Including take her to his bed.

A marriage where she was stripped of all of her rights, including her father’s promise she could marry the man of her choice.  “You willna tell me the reason our sovereign bade we marry?”

Above, to give the greatest impact to the next dialogue, I added more internal dialogue to allow the reader to learn more about the heroine, to become empathetic to her struggles, and to understand the stakes, and her fear.  I also put the line, “Including take her to his bed.” on its own for impact.

A muscle worked in his jaw.  “The reason for this match is our kings to share.”

I used the action before the dialogue to cue the reader that the hero is irritated vs. telling the reader with a dialogue tag.  Example: “The reason for this match is our kings to share,” he said, irritation thick in his voice.

Below, to finish out this portion of the scene, I continue to add touches of internal and action, but keep my dialogue confrontational to keep up the pace and tension:

“Is it?” she said, furious at this turn of events.  “Being granted a formidable stronghold along with the title of earl seems an unusual boon for a knight supporting his king.”

His nostrils flared as he towered over her, his reaction that of a man unused to being questioned.  “I dinna expect you to understand the workings of a monarch, nor the challenges ahead to reunite Scotland.”

Anger tore through her.  “How dare you accuse me of ignorance when you know naught of me!”

The pompous ass!  She glared at him.  “I have managed Avalon Castle for the last several years.  I am skilled with a sword, in the arts of healing, and have a thorough understanding of strategies in battle.”

“Mayhap,” he said, “but weapon’s practice or discussions of tactics with nay threat of personal harm are poor teachers to the reality of war.”

A fact she couldna debate.

Fatigue flickered in his gaze.  “Lady Katherine, neither of us wishes this marriage, but ‘tis done.  For Scotland’s freedom, ‘tis imperative to retake Avalon Castle, a feat I will achieve.”

Note:  The last word and its impact:  You help create calm, suspense, drama, intrigue and so on by the last word you choose in each sentence.  The last read word is the most remembered, so as you choose your last word ask yourself, what emotion am I trying to create, then choose a word that supports that emotion.

Before:  She wanted nay part of this marriage, the promise of their cold, empty life ahead, or Sir Stephan.

After:  She wanted nay part of this marriage, Sir Stephan, or the promise of their cold, empty life ahead. (End with the harder ‘d’ for a more intense feeling.) 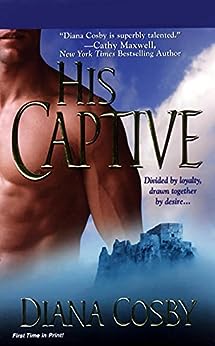 Any remnants of warmth faded in his expression.

Any remnants of warmth in his expression faded.

I hope you’ve found my comments about dialogue helpful and if you should have any questions for me please comment below and I will gladly answer. 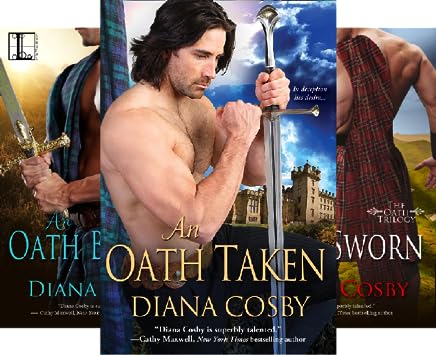 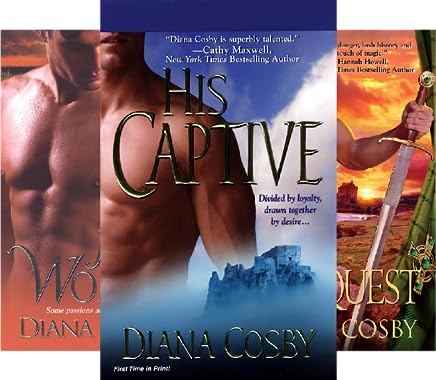 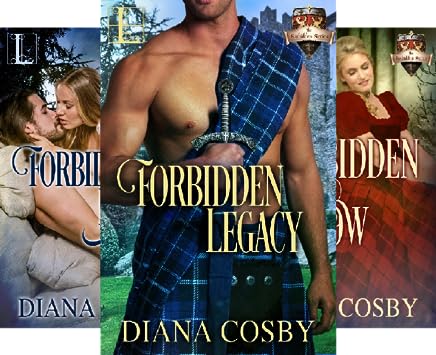 A retired Navy Chief, Diana Cosby is an international bestselling author of Scottish medieval romantic suspense. Books in her award-winning MacGruder Brothers series have been translated in five languages. Diana has spoken at the Library of Congress, Lady Jane’s Salon in NYC, and appeared in Woman’s Day, on USA Today’s romance blog, “Happy Ever After,” MSN.com, Atlantic County Women Magazine, and Texoma Living Magazine.
After her career in the Navy, Diana dove into her passion – writing romance novels. With 34 moves behind her, she was anxious to create characters who reflected the amazing cultures and people she’s met throughout the world. After the release of the bestselling MacGruder Brothers series, The Oath Trilogy, and the first three books of The Forbidden Series, she’s now working on book #4, Forbidden Alliance, of the five-book series, which will be released August 6th, 2019.
Diana looks forward to the years of writing ahead and meeting the amazing people who will share this journey.   http://www.dianacosby.com

I am a lover of books, both reading and writing. 2018 marks the beginning of my own journey from writer to published author. This blog will showcase various authors' thoughts on the elements of novel crafting, and my attempts to find my voice in writing. While journaling this journey, I hope to encourage others to follow their dreams. Book reviews continue as I have the last four years, only making time for my new pursuits.
View all posts by eileendandashi →
This entry was posted in Diana Cosby, Interviewing authors, Novel Development, On Becoming a Writer and tagged author interview, Dialogue in Novel Writing, Diana Cosby. Bookmark the permalink.