Review: Just out ~ BY THE UNHOLY HAND! Book one of a new series from Kathryn Le Veque. This is not the usual read from Le Veque. It’s darker. More ruthless…

Posted on January 31, 2019 by eileendandashi 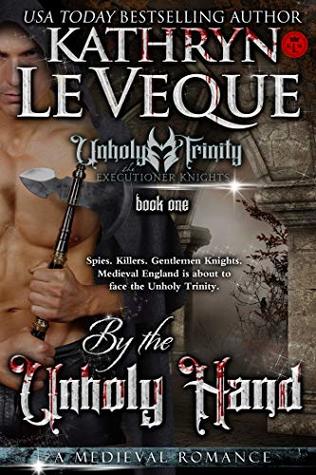 Spies. Killers. Gentleman knights. Medieval England is about to face the Unholy Trinity.

You read about them in ‘Lord of Winter’. Now discover Book One in 2019’s exciting new Medieval series!

1200 A.D. – In the time following the death of Richard the Lionheart and the ascension of his brother, John, to the throne of England, a plot against the new king is hatched from an unexpected place – deep within the bowels of The Lateran Palace in Rome. It is rumored that the Pope himself is behind it. It is a plot so dark, and so dastardly, that William Marshal needs men who specialize in dark and dirty games in order to save a king they all hate, yet a king that England desperately needs.

The Marshal needs the men known as The Unholy Trinity -the Executioner Knights.

Sir Maxton of Loxbeare is the leader of this unholy band of cutthroats. A big man with dark hair and dark eyes, Maxton fostered in the finest houses, but there is something unsettling about him. He is a man who easily kills without remorse, and he never questions an order, no matter how unsavory it is. William Marshall tasks Maxton and his comrades with seeking out the papal assassins, and the duty soon becomes a high-stakes game of chess, with checkmate being the life of the King of England.

Enter Lady Andressa du Bose. A great heiress who was cheated out of her inheritance by a conniving aunt, Andressa has spent unhappy and bitter years serving in the convent she was essentially sold to. A chance meeting with Maxton introduces Andressa to a world she wants to be part of, and a man she is greatly attracted to, but in that meeting, she has unknowingly given Maxton a lead on something he very much wants – a clue to who the assassins really are. All signs point to papal operatives. Maxton has a job to do and he’ll use anyone he can to complete it, including the lovely pledge who is increasingly on his mind… and in his heart.

Join Maxton and Andressa in a deadly game of cat and mouse, where all is not what it seems, and even those most devout can sometimes hold a terrible secret. It soon becomes clear that Maxton must make a choice… give in to his feelings for Andressa, or save a king, and with that, England’s sovereignty.

It’s a showdown of good against evil, and the power of love against a knight’s sense of duty, in this larger-than-life Medieval Romance.

Note: Read Lord of Winter by Kathryn Le Veque as a prequel to this series!

Review:  The story is set in dark tones, much like the evil that is perpetrated against King John by the Pope of Rome.  What makes it unfathomable, is not the Pope with his hatred against the King who seeks to change the political scape, but the means by which it will be done.  That my good reader, is what will eat at your craw, will repulse you, sicken you and fascinate you.

The Lateran Palace in Rome housed three Knights in lavish style after they returned from the Crusades.  These men were renowned killers.  They didn’t question the means of execution—very Machiavellian in their views.

When the Pope commanded them to kill their own king of England for his own political agenda, they refused. From lavish treatment to imprisonment, until someone as powerful as the Pope needed their services.

Sir Maxton, the leader of the trio, somewhere between the dungeon and his new job for William Marshal had changed. Those closest to him see it.  Can a man who has killed for years without remorse change?

A hapless, yet a beautiful and kind woman, Andressa, resides within the walls of St. Blitha.  She comes from wealthy titled parents, both have died leaving her to a guardian aunt who has little scruples in ridding her, simply by housing her in St. Blitha, the local convent.  The Mother Abbess has little scruples using the money received monthly for Andressa’s expense to further her own comfort. The nuns are forced to leave the nunnery and steal food.  Only those ‘special assistants’ of Mother Abbess have privileges.

But reader there is more, much more divulged as the story unfolds.

Sir Maxton comes upon Andressa while she is out stealing for food.  There is some attraction, but he is above all curious as to why a nun is stealing food.  Most events in life aren’t a coincidence as serendipity surely abounds. You will be riveted to this compelling story, much like rubbernecking in traffic when there is a gruesome accident.  You won’t, no you can’t turn away.

I am a lover of books, both reading and writing. 2018 marks the beginning of my own journey from writer to published author. This blog will showcase various authors' thoughts on the elements of novel crafting, and my attempts to find my voice in writing. While journaling this journey, I hope to encourage others to follow their dreams. Book reviews continue as I have the last four years, only making time for my new pursuits.
View all posts by eileendandashi →
This entry was posted in Book Reviews, Historical Romance, Medieval Romance, New Book Release and tagged Book Review, By the Unholy Hand, Historical Medieval Romance, Kathyn Le Veque. Bookmark the permalink.

1 Response to Review: Just out ~ BY THE UNHOLY HAND! Book one of a new series from Kathryn Le Veque. This is not the usual read from Le Veque. It’s darker. More ruthless…