Review: THE HIGHLAND CHIEFTAIN by Amy Jarecki ~ part of Lords of the Highlands Series! Next month a new release!

Posted on December 6, 2018 by eileendandashi 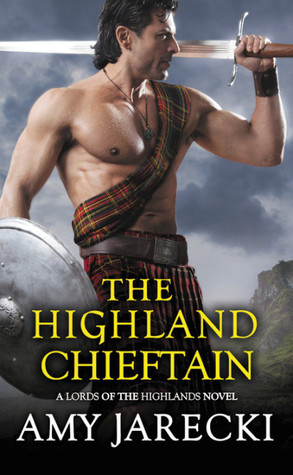 Fans of “romance à la Outlander” (RT Book Reviews), will love this sexy, action-packed Scottish historical as a battle-hardened Highlander will fight with all he has to save the woman he loves–even if she can never love him back.

After being unceremoniously jilted by her betrothed, Lady Mairi MacKenzie is humiliated and heartbroken – but she’s not desperate. As the daughter of an earl, she won’t give her hand to just anyone, and she definitely isn’t swayed by a last-minute proposal from Laird Duncan MacRae. The powerful clan chieftain may be disarmingly handsome and charming, but he’s not a nobleman. Mairi doesn’t want his pity or his charity – even though his dark smoldering gaze makes her melt with desire.

Dunn may be a battle-hardened clansman, but he’s always had a soft spot for Mairi. For years, she tormented him with flirtation – only to reject him. But he’s not giving up. When Mairi is attacked by redcoats, Dunn goes after the woman he loves. Through brute strength and fierce action, he will protect her life at any cost. But to win her heart, he will have to show her the tenderness in his own.

Review:  Mairi sees her life in shambles.  I see she is her own worst enemy when it comes to self-esteem.

She was betrothed as a young child to a boy child destined to be the earl of Seaforth, and her life was planned for her, which made life pretty easy, and rather suited her. But the unbelievable happens – the groom to-be breaks off the betrothal to marry someone else.  Mairi is beyond humiliated, wishing to stay home and never show her face in society again–from the butterfly of the party to a dismal existence.

A certain Duncan MacRae, chieftain of Clan MacRae obviously had felt sorry for her because he asked for her hand.  She only became further embarrassed.  She would take no pity from someone who only would pick up the shattered pieces of her existence. Her father made that clear to her – the man only felt sorry for her.

Her father forces her to go with him to a gathering at Urqhart Castle.  He wants her to marry well – perhaps a peer of the peerage.  He will force her hand if necessary!

Duncan MacRae, even though a chieftain, who works to protect Seaforth and family has always been smitten by the spitfire, Mairi.  She is so vivacious. When Seaforth begged off on the marriage, Duncan presented himself to her father to ask for her hand.  Alas, she was not to be his.

Duncan is part of the festivities at Urqhart Castle and can’t keep his eyes off Mairi. While in the middle of the games, redcoats show up itching to make trouble and trouble they bring.

Where is Mairi?  She traipses off into the forest just before they show up.  Duncan notes redcoats take the same path.

Duncan isn’t in control of his emotions as he chases the men.  He finds Mairi with her skirts up around her waist fighting off three lewd men.

This scene is terribly exciting as danger surrounds Mairi and now Duncan for having killed three men. He wants to keep Mairi’s reputation and honor intact, but as events unfold, it begins more and more difficult to do so.

Author Amy Jarecki keeps the tension coiling as they are chased through the highlands, but a Highlander knows his way better than any Redcoat while a Highland lassie pulls strength from her innerself.  Now Mairi’s father is working against Duncan  The man who saves his daughter is now being hunted with a bounty on his head!

You will simply love this nail-biting tale. I, as a reader,  highly recommend Jarecki’s work.  Don’t miss the rest of the series. She’ll keep you entranced.

I am a lover of books, both reading and writing. 2018 marks the beginning of my own journey from writer to published author. This blog will showcase various authors' thoughts on the elements of novel crafting, and my attempts to find my voice in writing. While journaling this journey, I hope to encourage others to follow their dreams. Book reviews continue as I have the last four years, only making time for my new pursuits.
View all posts by eileendandashi →
This entry was posted in Action/Adventure, Book Reviews, Highland Romance, Highland Stories, Historical Romance, Romantic Suspense and tagged Amy Jarecki, Book Review, historical romance, Lords of the Highlands Series. Bookmark the permalink.