Audiobook Review: SPECTRE OF THE SWORD, part of the series of the de Lohr Dynasty by Kathryn Le Veque

Posted on October 3, 2018 by eileendandashi 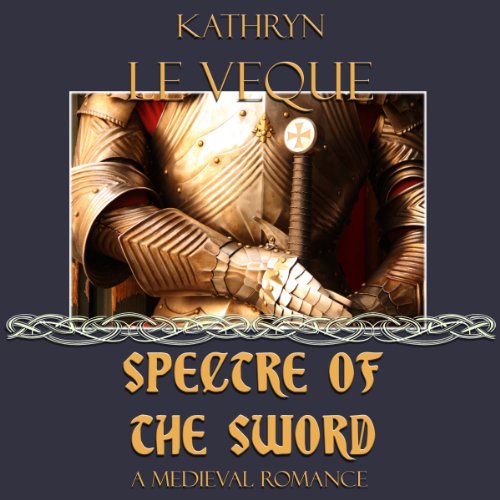 A.D. 1203: The Lady Elizabeau Treveighan is the illegitimate daughter of Geoffrey, Duke of Brittany. Elizabeau was sent to foster at a very young age, her identity known only to herself and the earl who fostered her. When her half-brother Prince Arthur is murdered and rumors begin to fly that the opposition to King John intends to marry her to a Teutonic prince and supplant her and her new husband as the rulers of England, she suddenly becomes a very hot, and very dangerous, commodity.

Sir Rhys du Bois is charged with keeping Elizabeau safe until her arranged marriage can occur, but the task turns into one of monumental proportions. It’s one harrowing flight after another as Rhys tries to keep Elizabeau from harm’s way. Somewhere in the process, they fall madly in love with each other and the knight finds himself battling duty and love in order to stay on task. Torn, but with a tremendous sense of duty, he cannot escape the feelings that are swamping him, and Elizabeau does not make it easy for him. Her love for him supersedes her loyalty to her country, and to a family name that has only meant heartache for her.

When Elizabeau is finally captured by the king’s men and slated for execution under the charge of treason, Rhys will risk everything to save her from the executioner’s sword. However, Rhys is betrayed by another knight and soon, he too is slated for the executioner’s axe. As Rhys and Elizabeau face death together, allies come together for a covert operation that will save their lives. It’s a race against time before King John’s men can execute the last legitimate heiress to the throne and her protector turned lover.

The reader will be caught between Elizabeau and Rhys–two individuals whose hearts are squeezed and tortured weighing which is most important – honor as a Knight who must comply what his liege demands, duty to country as a noble woman, or the searing intense love connection they find. I was easily thrown into this quagmire of emotional turmoil which author Le Veque is so good at developing.

Not only do Elizabeau and Rhys deal with this emotional dilemma, they find themselves hunted down.  Elizabeau is to wed a prince she has never met for political gain for her country, she is also being hunted by her enemies to rid themselves of what she may attain. Rhys must save the woman at any cost to himself.  A true knight of honor.

This quick-paced, page-turner with its dangerous setting and emotional intensity, kept me listening well into the night.

Elizabeau is quite a character, with spunk and a desire to live her life as she wants to.  She wants Rhys, not some Teutonic prince to placate her country. Her quick wit and spontaneity of action saves the day, but at the same time very nearly gets Rhys killed—there were some rather breathless moments laced with humor.

Rhys has always been a warrior and knight.  He lives and breathes their code.  He struggles mightily to avoid having his heart entangled with a woman who will bring them both down.  He is quite the warrior mathematician, which does him in good stead when faced with losing Elizabeau forever. However much he fights the lure of Elizabeau he cannot remain untouched.  She is a sweet, loyal and loving woman.

This is a stunning, emotionally engulfing story.  The narrator has an unusual style and is not one of my favorites.  However, he did a terrific job in portraying the intimate emotion between the two of them.  Scenes tête-à-tête, were singularly impactful and held me in rapt attention.  I was the proverbial fly on the wall.