Recently Published! A Review: HIGH WARRIOR by Kathryn Le Veque Powerfully and Boldly Told! – “A man hath no greater love than he lay down his life for his friends” 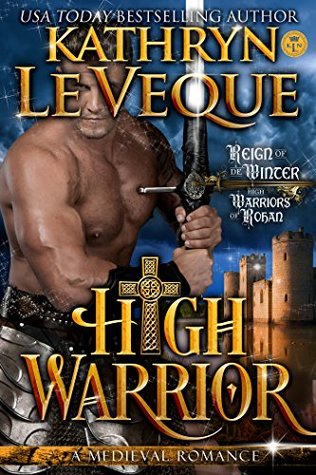 Powerfully and Boldly Told! – “A man hath no greater love than he lay down his life for his friends”

Publisher’s Summary:
A big Irish knight, much beloved by his English men, faces his biggest challenge when an injury nearly claims his life… and his confidence as a warrior.

The man known as the “High Warrior” is an Irish knight with an English overlord. Sir Bric MacRohan serves the House of de Winter as the head of the de Winter war machine. He is big, loud, and fearless.

Once the most aggressive, all-powerful knight in the realm, a great injury forces Bric to realize that he is, indeed, mortal. Though he recovers from the injury, it changes how he commands his men and how he handles himself in battle. Mentally, his is far more injured than he is, physically.

Enter Lady Eiselle de Gael. The daughter of a bastard of the Earls of East Anglia, Eiselle is ‘gifted’ to Bric by a very dear friend as a reward for saving the man’s life. The lady is resigned, but Bric is positively adverse. He doesn’t see it as a reward; he sees it as a punishment.

But what they didn’t expect was how much they would come to love each other.

When the greatest swordsman that England has ever seen lays down his weapon due to battle fatigue, it’s up to Eiselle and those who love Bric to help the man regain his confidence as a warrior, and to once again do what he was born to do. Men like Sean de Lara… Dashiell du Reims… and many more recognizable knights from Le Veque’s Medieval world all pull together to help Bric recover what he has lost… himself.

Medieval Romance has never been so emotional – or so romantic – as Bric and Eiselle discover the true power of their love.

(Note: This book is also related to the House of de Winter series and includes characters from the de Lohr Dynasty and Lords of de Royans series. Also note that it is a full length book, not 18 pages as indicated)

My Thoughts: Le Veque always writes a ‘meaty’ tale, and High Warrior is no different.  In fact, once the tale ended, I felt completely replete and extremely satisfied with the outcome of two lovers and their heartache finding their dream.

Le Veque’s stories, with richly textured, often deeply scarred or flawed characters keep me thoroughly entrenched page after page.  With all the conflict and struggle of life challenges, I have much to ponder, for I can always take away something of import from her stories – situations, although in Medieval times. They resonate deeply within my own romantic heart.

High Warrior goes beyond just another historical romance, our hero fights the effects of PSTD, a mental condition not accepted with compassion as we have come to understand presently, nor understood as anything other than weakness.

Our hero warrior is Bric MacRohan, revered for his mighty strength and unquestioning fearlessness on the battle field, and loved by his men.  He is a man of little emotion, the men are used to that.

However, a talisman given him long ago holds much wisdom in the words inscribed upon it.  He carries it always, often taking it out and kissing it during battles.  The words, “A man hath no greater love than he lay down his life for his friends” a knight understands.  Their brotherhood and protective spirit to bring them all home is paramount.

Bric has been instrumental in saving many lives.  His close friend, Dashiell, is in a position to pay him back, but with a gift Bric does not want—Lady Eiselle.  Bric is coerced into marriage; he must marry as his liege, Daveigh De Lohr, commands.

After being wounded in battle, the fearless, no emotional man who is feared as he cuts heads off on the battlefield, does the unthinkable.  He runs.  He’s confused.  He isn’t able to understand his fear.  He’s never been afraid.  Is it because he has a wife and he is beginning to love her?  Is she his weakness?

Lady Eiselle learns much about herself.  She had been resigned to this marriage as most women are during this period in history.  She finds inner-strength she knows not she has.  The depth of love she finds with her warrior knight will just plain curl your toes and seal your fate!

You will experience a great love affair, shed tears of sorrow, and share the pain that Bric fears of swords and arrow.  The story moves along with a fast-clip, secondary characters whom are friends of Bric support him and his wife is awesome in her support and love.

You will not be able to put this one down.  I can’t wait until it comes out in audiobook.  Le Veque’s books can be enjoyed over and over – so moving, so emotional and so inspiring.

I am a lover of books, both reading and writing. 2018 marks the beginning of my own journey from writer to published author. This blog will showcase various authors' thoughts on the elements of novel crafting, and my attempts to find my voice in writing. While journaling this journey, I hope to encourage others to follow their dreams. Book reviews continue as I have the last four years, only making time for my new pursuits.
View all posts by eileendandashi →
This entry was posted in Action/Adventure, Historical Romance, Medieval Romance, New Book Release and tagged Dragonblade Publishing, High Warrior, High Warrior of Rohan, Kathryn Le Veque. Bookmark the permalink.