Posted on February 8, 2018 by eileendandashi 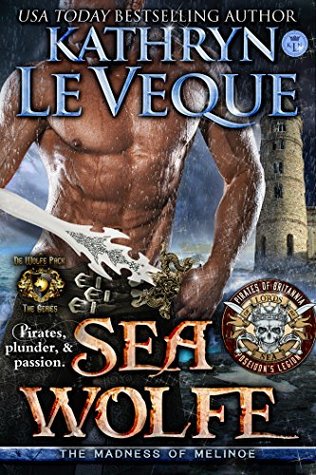 1445 A.D. – Rhoan de Wolfe has lost himself in the mystique of the powerful pirate known as Lucifer, the mysterious first mate of the leader of the Pirates of Britannia. A man with no past, and no future, Lucifer deliberately keeps the details of his life private, but the truth is that a falling out with his father, years ago, have turned him into something dark, bitter, and brooding.

But he is the best pirate in the group known as Poseidon’s Legion, a band of English pirates based in Cornwall. When Lucifer and his mates intercept a merchant ship sailing from Ireland to Plymouth, little does Lucifer realize the treasure on board the vessel go far beyond monetary gain. A woman named Genevieve proves to be far more than merely a captive and in that instant, Lucifer’s life is changed forever.

Genevieve Efford was aboard her father’s merchant vessel, traveling back to England to marry her betrothed, when the pirates attacked. Genevieve is a woman with strong ideals and she is vehemently opposed to marrying a man she does not love. Being captured by pirates is almost preferable, but Genevieve is a lady who does not easily surrender. Even as she plans to escape, the big, brooding pirate known as Lucifer captures her interest.

For a man who has sworn off women, Lucifer is reluctantly drawn to the fiery lass. It is an attraction he cannot ignore and unexpected passion ignites between two people who have different ideals in life. Genevieve is the fire to his ice, but when a treacherous pirate in Lucifer’s ranks seeks to separate Lucifer from his lady, but the bond between Lucifer and Genevieve is something that cannot be broken.

Join the man named for a fallen angel and the woman he loves in a tale of romance, excitement, and most of all, pirate adventure as the Sea Wolfe rules the high seas.

My Thoughts:  True to form, Le Veque writes an intriguing storyline.  This is the last in a series written by both Eliza Knight and Kathryn Le Veque.

Sea Wolfe is about a man, a de Wolfe, and nobleman, has divorced his past and falls into the life of a pirate. He has amassed riches and misses nothing.  He is challenged by the chase, has English and Scot friends – a contented man, happy to remain thus.

That is, until he meets Genevieve Efford, taken prisoner when on the high seas.  After being imprisoned at Perran Castle for a month, she’s spitfire angry when Lucifer shows up at the pirate stronghold. Having sworn off women for ten years, he’s not eager to deal with her.  But she fascinates him.

Genevieve is eager to leave the stronghold, trying to figure out if she can beguile herself into Lucifer’s good graces and have him promise to let her buy her freedom.  After all, pirates are motivated by money.

Both have emotions not foreseen or welcome. In steps one nasty slimeball of a pirate, Curtiz, and all is chaos and hardache.

Will Lucifer admit to his feelings?  Will Genevieve want her freedom more than Lucifer?  Will kismet bring them together?

I enjoyed the novella.  It focused on Rhoan de Wolfe and if you’re a fan of the de Wolfe pack, you’ll enjoy how this story touches that world.

I am a lover of books, both reading and writing. 2018 marks the beginning of my own journey from writer to published author. This blog will showcase various authors' thoughts on the elements of novel crafting, and my attempts to find my voice in writing. While journaling this journey, I hope to encourage others to follow their dreams. Book reviews continue as I have the last four years, only making time for my new pursuits.
View all posts by eileendandashi →
This entry was posted in Action/Adventure, Book Reviews, Historical Romance, New Book Release and tagged Book Review, historical romance, Kathryn Le Veque, Pirates of Britannia, Sea Wolfe. Bookmark the permalink.