Review: THE SEA DEVIL by Eliza Knight ~ a story of courage to face what life has dealt and to survive with your heart intact

Posted on January 16, 2018 by eileendandashi 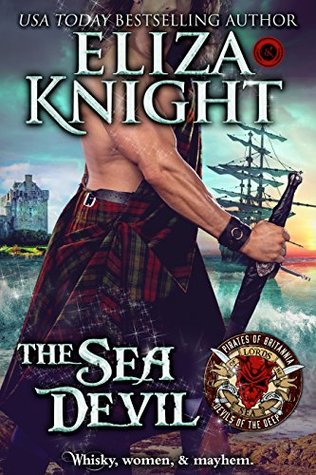 A daring brotherhood, where honor among thieves reigns supreme, and crushing their enemies is a thrilling pastime. These are the Pirates of Britannia.

Thornley “Thor” MacLeod, Captain of The Sea Devil and prominent member of the Devils of the Deep is out for one thing and one thing only–revenge against Santiago Fernandez, leader of Los Demonios de Mar. Tormented by the demons of his past, he knows the only relief to his pain will be spilling the blood of his enemy. When he learns that Santiago seeks to find a child he abandoned nearly two decades before, Thor is determined to find the precious treasure first. Which means, Thor may have to sacrifice his honor in order to exact the perfect vengeance.

Orphaned at a young age, Alesia Baird has grown up along the harsh coasts of Scotland, bearing witness to many a nightmare. With the hangman’s noose dangling ever closer to her neck, she has to find a way to escape the only life she’s ever known. When she overhears a pirate mention he seeks the child of Santiago Fernandez, Alesia takes the leap, knowing this could be her only way out.

Alesia must keep up the ruse long enough to escape with her life, and perhaps a sack full of jewels. But when it comes time to jump ship, she finds her destiny may have led her in a different path. Will the hardened Highlander allow a lass into his heart—or is she destined to be forever alone?

My Thoughts: A story of revenge with wonderful character development, played out among pirates with their own codes of honor.  These are men who are as passionate in bedding women as fighting battles against their foes.  The protagonists, dealing with harsh childhoods beat the odds to survive giving them second chances to find love. The emotion of revenge is a powerful force, yes, even to survive.

One evening while in port, Thor heard in a tavern, his biggest enemy, Santiago, would pay much gold for the man who brought him the child he sired some 20 years ago.  Alesai also heard the tale, figuring she was the right age, desperate to escape the watchmen and the promise of a hangman’s noose, presented herself to Thor as Santiago’s daughter after she sneaked into his ship’s cabin to escape the guards. She hoped to obtain the gold, herself, and be on her way. Thor, a giant of a man, believes her story for she is the spitting image of her father.

Just one too many thieveries, nimble of foot, quick of mind, filthy from years of surviving on the streets and in allies, Alesai, known better as the wharf rat has finally met her match in Thor, but not before she shows her prowess by challenging him to a fight, playing dirty to win. Thor is more intrigued by this sprite rather than angry. He seems to understand her.

As far as Thor was concerned, his revenge for her father, Santiago Fernandez, eclipsed everything else.  He lost his mother by his sword. However, his code of honor niggled his conscious.  Could he turn over this young, spirited woman to her hateful father? Could he bed her and strut around telling Santiago what he’d done? Just to gain revenge, but hurt an innocent victim in the process?

This is a story of the loyalty, honor and tricks between pirate brethren of the sea, with hot, spicy scenes of passion and deep love between Thor and Alesai. I’ve enjoyed the series thus far, and look forward to the last book of the series, Sea Wolfe.

I am a lover of books, both reading and writing. 2018 marks the beginning of my own journey from writer to published author. This blog will showcase various authors' thoughts on the elements of novel crafting, and my attempts to find my voice in writing. While journaling this journey, I hope to encourage others to follow their dreams. Book reviews continue as I have the last four years, only making time for my new pursuits.
View all posts by eileendandashi →
This entry was posted in Action/Adventure, Book Reviews, Historical Romance, New Book Release and tagged Book Review, Eliza Knight, Pirates of Britannia, The Sea Devil. Bookmark the permalink.