Posted on December 30, 2017 by eileendandashi 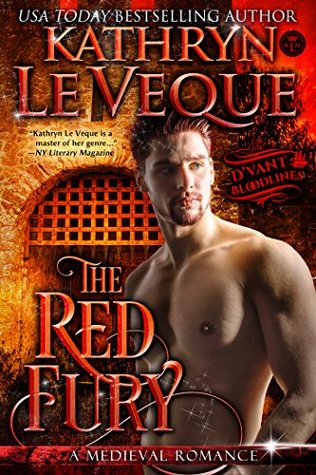 Publisher’s Summary:
If you loved The Wolfe, Rise of the Defender, and The Dark One: Dark Knight, welcome to the original Le Veque epic Medieval saga of THE RED FURY. England and Scotland collide in this blockbuster tale of revenge, betrayal, hope, and passion.

1233 A.D. – A young woman forced to command her father’s battered Highlander army upon his death. Her only hope in saving her home, and her life, is with a fearsome mercenary called The Red Fury.

Josephine de Carron is a young woman with a massive legacy weighing on her slender shoulders. As heiress to the Earldom of Ayr, she is a cousin to the king through her mother, and the king considers her a most valuable bargaining tool in the politics of Scotland. But Josephine isn’t a willing pawn for the king – she’s only concerned with saving her family home, Castle Torridon, from the repeated attacks of a former ally. After a particularly nasty siege, Josephine realizes that they cannot withstand another, and she is forced to summon the most feared mercenary in Scotland, a man known as The Red Fury.

Andrew d’Vant is a paradox – an English knight, he escaped his wicked brother years ago and fled to the highlands of Scotland, forming one of the most rag-tag and fiercest mercenary armies the world has ever seen. He has become very rich by fighting – and winning – other men’s battles. Summoned by Josephine, Andrew’s price is too high for the beaten castle but his instant attraction to Josephine has him accepting the task for far less than his usual fee. There’s something about the strong, battered, and beautiful woman that draws him in.

But The Red Fury gets more than he bargained for.

A simple task of defending a castle becomes an enormous and complex tale of adventure, suspicion, royal intervention, and dark family secrets. When Josephine is thrust into the king’s politics in spite of her resistance, she finds herself pledged to none other than Andrew’s wicked brother. Now, Josephine finds herself at the heart of the Kingdom of Scotland and deeply in love with Andrew, and he with her. Andrew must join with former adversaries in order to save the woman he loves from the man who ruined his life.

The Red Fury is in for the fight of his life with the prize being Josephine.

My Thoughts:  When wanting to delve into a meaty Medieval tale seeped in heart-pulling emotion, Le Veque does a bang-up job providing one!  We indulge with our every sense in a realistic setting of medieval life, where women, as much as men, fight for their lives, their honor, and what is theirs—women, men, children and property.

It is a time where women have little to say about their lives. It’s a time of kill or be killed, where friends are needed in one hand and a sword fills the other.

Andrew d’Vant, a man of determination, embodying hope and courage, seeks to destroy his brother, Alphonese d’Vant, Earl of Annan and Blackbank. For 19 years, his hate for his brother has simmered.  He’s a man known as The Red Fury, one who, when battle is upon him, he is beyond fast and ruthless.

As a lad, Andrew’s brother banishes him from the manor after putting his own mother in the dungeon.  Alphonse is not only hated by Andrew. Most others fear him because he is massive in build with a mean and vicious personality, his cruelty knows no bounds. Alphonse, in his own words says women are like chickens; a penny for a dozen, so I shall never go hungry. He’s so massive and brutal, women often die under his hand.

The de Carrons and the Dalmellingtons had been feuding for years.  Josephine, eldest daughter of her father is in charge of her keep, now for some three years.  The Dalmellingtons keep hammering at them, every two weeks attacking their keep, and with each battle Josephine loses more men, a disheartening endeavor.  The idea of hiring mercenaries to help shore up their numbers gets introduced.  The best mercenary is hired, Andrew d’Vant, better known as The Red Fury.

Sweet Josephine de Carron, a woman as strong as sweet, falls in love with Andrew and he with her.  This budding relationship is unbeknownst to the king who wishes to use Josephine de Carron to build a better alliance between the English and Scots, by betrothing her to Andrew’s brother.

The day comes where Andrew must face his dragon.  He must avenge his mother and protect Josephine from his beast of a brother.

I enjoyed hating Alphonse.  So much is at stake for both Josephine and Andrew.  A sword fight between Andrew and Alphonse could not be more frightening leaving me pitifully hanging on every sentence, and ultimately holding my heart in my hands!

The supporting friends of Josephine and Andrew are well developed, entirely appealing, which have me eager to see them appear in any following stories for the d’Vant’s.  I am particularly drawn to Justine, Josephine’s sister, who fancies herself a physic and mystic, Nicholas de Londres, nephew to King Alexander, a talented and compassionate man, and friend to Josephine; Ridge, bodyguard to the king who has more honor in his little finger than what King Alexander possesses!  We learn little about Ridge, other than owing a debt to Josephine, but I’d love to see Le Veque write his story.

If you are a Medieval genre fan, do yourself a favor reading what Le Veque has to offer. I recommend her many novels both in writing style and plot.

I am a lover of books, both reading and writing. 2018 marks the beginning of my own journey from writer to published author. This blog will showcase various authors' thoughts on the elements of novel crafting, and my attempts to find my voice in writing. While journaling this journey, I hope to encourage others to follow their dreams. Book reviews continue as I have the last four years, only making time for my new pursuits.
View all posts by eileendandashi →
This entry was posted in Action/Adventure, Highland Romance, Medieval Romance, New Book Release and tagged Book Review, d'Vant Bloodlines, Historical Medieval Romance, Kathryn Le Veque, New Release, Tender is the Knight, The Red Fury. Bookmark the permalink.