Hot off the press! THE HIGHLAND GUARDIAN a Lords of the Highlands Novel by Amy Jarecki

Posted on December 19, 2017 by eileendandashi 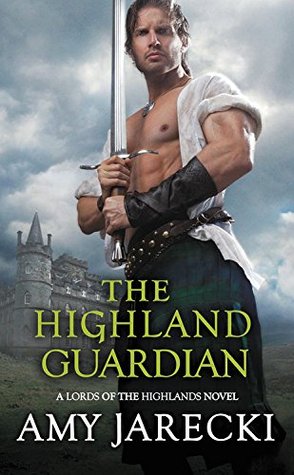 Publisher’s Summary:
He has sworn to protect her…

Captain Reid MacKenzie, Earl of Seaforth, is a man of his word. During a harrowing battle at sea, the heroic Highlander makes a vow to a dying friend to watch over the man’s daughter. His plan: send the child to boarding school as quickly as possible so he can continue his mission. But Reid’s new ward is no wee lass. She’s a ravishing, fully grown woman, and it’s all he can do to remember his duty and not seduce her himself.

Miss Audrey Kennet is stunned by the news. First this kilted brute tells Audrey her father is dead, and next he insists she marry. But as Reid scours England for the most suitable husband, Audrey soon realizes the brave, brawny Scot is the only man she wants–though loving him means risking her lands, her freedom, and even her life.

My Thoughts: A story really appeals to me when a hero, once given his word, will follow through even when it is inconvenient and neigh impossible to make it happen.  Such is the case with Reid MacKenzie, Earl of Seaforth, when he vows to a dying associate working for the cause, to protect his daughter, much as a guardian would.

The girl, Miss Audrey Kennet, isn’t a wee lass as Reid thinks, but a woman full-grown with the most beguiling blue eyes.  Yes, the reader knows Reid will sink in the mire of lust, love, or both long before he knows it, and then it’s too late!

His plans change according to the circumstances.  He can’t place her in boarding school, not even finishing school, because she’s completed her schooling. She’s of marriageable age, so all he needs to do it put Nicholas Kennet’s business in order and find a lad to marry her to.

As in any good story, and Amy Jarecki always tells whoppers, simply going from A to B is fraught with challenges.  Here, Miss Audrey herself and other outside forces have Reid reworking his plans over and over.

Reid gets drawn into the net of caring (he’d rather not!)–he needs to get on with his own life.  The cause needs him.  His clan needs their chieftain with an added obligation which perils his freedom. His father made a pack with his uncle (again that honor thing) which has him already betrothed to his father’s uncle’s daughter.  What is more important than unifying the clan and working for the cause?  The Earl of Seaforth will be pulled in every direction, his heart being tattered in the process.

Audrey Kennet has more than beguiling blue eyes.  She’s a woman of honor herself and demands to pay back the times Reid has protected her.  She loses a little more of her heart to him every day.  Frankly, they are a match made in heaven.

As with the rest of this series, this is an exciting read, suspenseful, full of danger plus  experiencing what a man in love will do as he grapples with the anguish of satisfying his heart and doing the honorable thing.

I am a lover of books, both reading and writing. 2018 marks the beginning of my own journey from writer to published author. This blog will showcase various authors' thoughts on the elements of novel crafting, and my attempts to find my voice in writing. While journaling this journey, I hope to encourage others to follow their dreams. Book reviews continue as I have the last four years, only making time for my new pursuits.
View all posts by eileendandashi →
This entry was posted in Action/Adventure, Book Reviews, Highland Romance, Highland Stories, Historical Romance, New Book Release, Romance and tagged Amy Jarecki, Book Review, historical romance, Lords of the Highlands Series, The Highland Guardian. Bookmark the permalink.