Posted on December 3, 2017 by eileendandashi 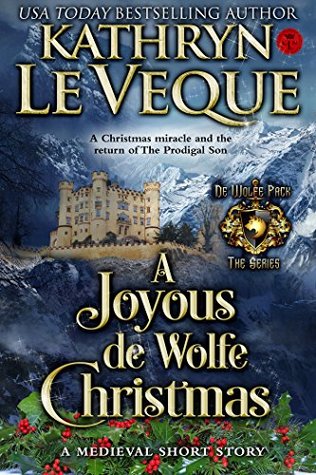 The story de Wolfe Pack readers have been asking for! The reunion of Scott and Troy de Wolfe wrapped up in a holiday short story!

It’s Christmas 1274 A.D., and the House of de Wolfe and their allies are gathering for a wedding, the marriage of James de Wolfe to Lady Rose Hage.

But someone is missing.

The closely knit de Wolfe family is feeling the absence of Scott de Wolfe, the first born of the eldest de Wolfe twins, Scott and Troy. Four years ago, the twins lost their wives in a tragic accident and while Troy de Wolfe was able to work through his grief (DARKWOLFE), Scott’s reaction to the tragedy was to run away and never return (SHADOWWOLFE).

But now, Scott’s running has come to an end. He returns to the family who greatly misses him, but there are those whose forgiveness he must seek. Experience the return of Scott de Wolfe to his family and, most importantly, to his brother, Troy, in this tender tale of forgiveness, of love, and of holiday miracles.

(This short story can be read as a stand-alone but will make much more sense if read after DarkWolfe and ShadowWolfe, as it is an extended collective epilogue.)

My Thoughts:  I always read the author notes, usually placed in the front of the book in Le Veque’s work.  It gives me a bit of insight what to expect. This short story, easily read of an evening, had me bawling, surprisingly enough, not about James, which the author ‘killed off’ (more’s the pity!) sometime later in the chronological order of the books.  I’ve read most of the deWolfe pack series, so I knew of his demise.

I started the read with a tender heart.  You see, James got married in this story.  Knowing his marriage would be short, gave me pause listening well to the dialogue.  Had any of them anticipated him leaving them so soon? Did his parents, Jordan and William, say something which we can construe they felt more than just happiness for James marriage?

This story is also about Scott and Troy, James’s twin brothers, who haven’t talked for four years.  They share a tragedy which tears and shreds the relationship of love the two had.  You know how when something happens you generally are hurt and depending on the severity of the hurt, you remain so until you become angry?  Such is the case with the twins.  Troy left immediately after the death of his wife and children, not even there to bury them.  Scott considered him a coward after waiting for his return.

Scott stayed, faced the music.  He, too, had lost his wife and children in the same tragic event.  If you want to read about this tragedy affecting Scott and then Troy, you can catch it in ShadowWolfe and DarkWolfe.

I absolutely loved this short story because Le Veque gets into the terrible emotional turmoil each of the twins carry, and with her exquisite writing she pulls me right into the thick of things.  Le Veque’s takes a moment of happiness, the marriage of James, brother to Scott and Troy, couples it with such anguish, it breaks my heart, hence the red, puffy, swollen eyes!  Even with that being said, Christmas with de Wolfes is one of renewal, forgiveness and vows.

May all you fans of Le Veque have a Merry Christmas!  Even if you haven’t started reading her yet, you’ve a New Year resolution you can add to the list.  Read this fantastic writer of historical Medieval romance.

I am a lover of books, both reading and writing. 2018 marks the beginning of my own journey from writer to published author. This blog will showcase various authors' thoughts on the elements of novel crafting, and my attempts to find my voice in writing. While journaling this journey, I hope to encourage others to follow their dreams. Book reviews continue as I have the last four years, only making time for my new pursuits.
View all posts by eileendandashi →
This entry was posted in Book Reviews, Historical Romance, Medieval Romance, New Book Release, Novella, Short Story, Uncategorized and tagged A Joyous de Wolfe Christmas, Christmas Story, Historical Medieval Romance, Kathryn Le Veque, Short Story. Bookmark the permalink.