Early Review: LEADER OF TITANS: Pirates of Britannia from Lords of the Sea. Battles on land. Battles on sea. Discover how pirates divvy the plunder and what is ultimately sacred to them.

Posted on November 27, 2017 by eileendandashi 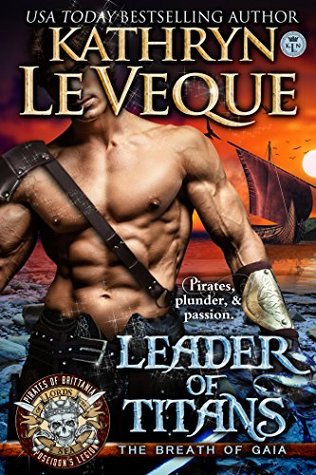 Welcome to a brand-new Medieval series of a daring brotherhood, where honor among thieves reign supreme, and crushing their enemies is a thrilling pastime. These are the Pirates of Britannia.

1444 A.D. – Constantine le Brecque a man of many facets. As the bastard son of Henry V, he was raised in secret to protect him from the king’s enemies and lived his life knowing that his royal blood was a curse. He was, however, properly educated and trained as a knight, and one of the very best England has ever seen. But when he falls in love with the wrong woman, the course of his life is irrevocably changed….

Now, Constantine is known as the fearsome English pirate called LEADER OF TITANS, but his experience with his ex-lover wasn’t enough to drive him away from women. He loves them, and loves them in droves. Passion, plunder, and pirates his is motto.

Enter Lady Greggoria “Gregg” de Moyon. A pious woman, she was given a sacred object by her husband, an object much sought after by the terrible French pirates who roam the coast between Brittany and England. When her husband is killed by the French pirates on their quest for the treasure, Greggoria must turn to Constantine for help. She knows that only a pirate of equal strength can fight off the French and save her from most certain doom.

Constantine is more than willing to help the beautiful woman with the unusual name. But when he unexpectedly falls for her, the man with more women than a Arab shiek finds that his task has just become unbearably complicated. Can he save Greggoria from the French pirates who want to see her dead? And the mysterious treasure that she is protecting… will it be his destruction?

NOTE: This is Book 2 in the Lords of the Sea pirate series, written by Eliza Knight and Kathryn Le Veque. Eliza Knight’s novel, Savage of the Sea, is Book One in this series. All books are stand-alone but much more fun if read together!)

My Thoughts: This is a series written by well-loved authors.  Eliza Knight is known for her Scottish Historical Romances, while Kathryn Le Veque is known for Medieval Historical Romances.  Here the authors have taken to the seas.  The series begins with the focus on pirates of the Scottish ilk in book one, Savage of the Sea.  We learn there is a strong connection between Shaw MacDougall, the Scot leader of The Devils of the Deep, and the hero of Book two, Constantine Le Breque.  Constantine has his training as a knight, but has rarely picked up his sword.  Frankly, he’s been running for his life and feels safest on the seas.  He’s a savvy ship captain, trained by the best shortly after he was knighted.  He seems to have a grudge against the world.  Being born the bastard of the king, he is in line to become king, something he’d never want, but those who prefer another outcome are eager to take him out of the running.

He keeps his men happy, well cared for by plundering and pirating, and lives in a modicum of luxury.  He hasn’t thought much about right or wrong, but one little lady, Lady Greggoria “Gregg” de Moyon, has a large impact on him, blinding his better instincts to question and analyze. She also has him questioning his way of life. We witness the softer side of a pirate.  They have their own honor among themselves.

His fiercest friend?  Shaw MacDougall.  It’s a friendship based on respect, admiration of skill, honed by battle saving each other’s hides.  This is a rare friendship—one that both can count on; the story aptly shows us how deep the friendship is.  In fact, Constantine is also very close to his men, particularly Augustin and Lucifer.  Both are knights with their own tales.  So here we have it.  Knights reduced to plundering and killing, on sea most of the time or back at Perran Castle, Constantine’s hold, surrounded by water. The French pirates (The Water Bearers)  and Spaniard pirates (Demons of the Sea) are enemies to both Shaw and Constantine. Side note: The French pirates are just plain ruthless, disgustingly so.

Gregg has her own set of problems.  As women of that time, she’s manipulated with little choice to the direction of her life.  Gregg’s brother is working with someone close to the king who wants Constantine dead.  She is sent to convince him to help her in a plan, one where Constantine will be the loser.  If she succeeds, her brother will provide a cottage for her and means to live quietly.  She’ll do what she’s told, not liking how she’s used, but her payment will steer her free and clear of her wicked brother.

Gregg isn’t expecting to be attracted to Constantine. He just wants to plunder her curvaceous body.  Heck, he’s a pirate, right? He gets what he wants, but Gregg provides much more for him. As you know, life and its danger is in the journey.  You’ll wonder how Constantine can be so blind.  You’ll wonder if Constantine’s men can keep him safe – for they aren’t under the spell of the lovely Gregg.

There are many aspects of the story I really like.  The battles at sea are exciting. A rather fierce battle takes place in a tavern, well written, keeps me on edge, as the  story coils tighter and tighter.  Le Veque’s style of writing provides the reader with all the ingredients to an entertaining, action-packed read.

Book three, The Sea Devil, written by author Eliza Knight is now available on pre-order. I’m eager to begin this one since Constantine has recently gifted Shaw an awe inspiring ship, sure to draw the attention of  greedy pirates.

I am a lover of books, both reading and writing. 2018 marks the beginning of my own journey from writer to published author. This blog will showcase various authors' thoughts on the elements of novel crafting, and my attempts to find my voice in writing. While journaling this journey, I hope to encourage others to follow their dreams. Book reviews continue as I have the last four years, only making time for my new pursuits.
View all posts by eileendandashi →
This entry was posted in Action/Adventure, Book Reviews, Historical Romance, Medieval Romance, New Book Release and tagged Book Review, Kathryn Le Veque, Leader of Titans, Lords of the Sea, Medieval Historical Romance. Bookmark the permalink.