Get Your Fix with TOUCH THE SUN by Cynthia Wright in narration form. Experience the pangs of becoming a nation in the larger scope and making personal wrong choices detrimental to the heart.

Posted on November 21, 2017 by eileendandashi 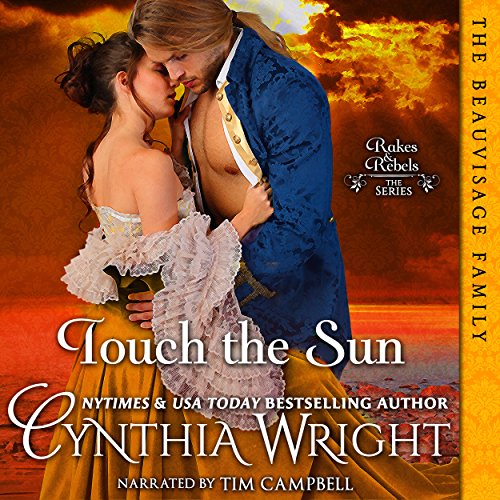 The Beauvisage novels and The Raveneau novels intertwine, with some characters crossing over. Should you wish to listen to them in chronological order, this is the sequence:

Publisher’s Summary:
A Daring Masquerade…
~ In 1789, on the eve of the first Presidential inauguration, charismatic Lion Hampshire aspires to a seat in the first Congress. In an effort to improve his rakish reputation, he agrees to an arranged marriage with Virginia-bred Priscilla Wade. However, his fiancée’s headstrong lady’s maid, Meagan, is not who she seems to be, and Lion’s carefully crafted future may be undone by his passion for the wrong woman…

My Thoughts:  The more you read from the Rakes and Rebels series, the more you want to read! Author Cynthia Wright gets right down to the things which matter in life, then and now, through her exquisite characterization of this period of history in building a nation of independence from those who are learning how to govern themselves.

Men, like Lion Hampshire, grew excited by the possibility of governing for the people and by the people. Wright brings the fervor of the times to the forefront.  I can actually see the people in the streets rallying around George Washington as he humbly shows his presence.

The narrator, Tim Campbell has narrated for some of my favorite authors.  He’s extremely versatile in depicting various personalities, accents, class of people, even able to do an admiral job with French. In this narration, his voice is to die for.  I don’t often hear him narrate with an American accent.  Gad, does he sound sexy!  His pacing is perfect, while wringing out every nuance and aspect of each character with dialogue. When a talented author combines her magic with par excellence of a narrator, it’s entertaining over the top!  Now to the story.

I enjoyed meeting shakers of the birth of this new nation: Benjamin Franklin, James Madison, John Adams, George Washington, William and Anne Bingham, along with John and Sally Jay—all play a part in this fascinating, historically accurate story.  Never have I felt so close to our forefathers as I read this book. It was thrilling to see them in action, how they thought the first leader of these United States should be addressed, where the place of residence for their supreme leader be, etc..

Lion Hampshire wants to make a difference, but his past exploits incline to be roguish. He must polish his character to be considered part of those who have the right to represent the people.  Can he remedy the situation?

Firstly, he needs a bride from a respectable family, someone who is more than able to host dinners, grace his arm, and mingle easily with politically minded men and women.  Certainly, his heart should not be allowed to make the choice for him.  And so, he chooses a woman, also looking for an exciting time in a big city, perfectly formed, exquisitely mannered, one Virginian belle, Priscilla Wade.  His wife would only be an adornment, pure and simple. (But watch out Lion, you haven’t met Meagan, yet!)

Meagan Sayers, a neighbor and friend of Priscilla, recently lost her parents through an accident, also her home and everything in it to creditors.  Her father had been overwhelmed in debt by their lavish lifestyle. Meagan is to be handed off to an old aunt in Boston, which she totally refuses to do.  Therefore, she concocts with her friend Priscilla, to accompany her to Philadelphia as her lady’s maid. Priscilla is to stay in Philadelphia to spend the time to get to know her betrothed, Lion Hampshire, before their marriage. The narrator has a grand time of it with these two women!

The situation gets hilarious since Meagan is a woman who spends much of her time in breeches, riding horses, or saying whatever comes to mind. How to be a quiet lady’s maid?  She didn’t have the skills, temperament (her zest for life literally shone from her eyes), nor manner to secret away who she is. And she had to, because she knew these political giants personally through her family.  She must keep a low profile.

But wouldn’t you know it? Lion is amused with her.  (I was amused with her – what a character!) He enjoys the discussions they have, he becomes more and more attracted to her.  She is NOT on his agenda.  But, can one stop feelings when they begin to take hold?

This story spoke to me on so many levels.  I thrilled to the times.  I took some time to go to Wright’s Pinterest page of pictures depicting what the people wore at the time, what their streets might look like, etc.  I even saw the false teeth made for George Washington.  Apparently, the man consumed lots of sweets!

I loved the struggle Lion went through.  He had to choose between moving in the political arena with respect, or follow that organ beating in his breast.

Could Meagan, after pretending to be a maid, come out with it and tell Lion who she is?  Would she want him if he didn’t love her, but just her place in society?  Meagan’s internal conflict and decisions, just about tear Lion apart. If you like to feel great emotion in your reads, this one will suit.

Lastly, I admire the long-standing of this book, originally written in 1978.   That’s almost 40 years ago.  It has since been digitalized for a whole new set of readers.  Those old books in print are hard to get.  So, those who haven’t read this, do, you are in for a treat.  The whole Beauvisage Family and Raveneau Family series are divine reading.  You can even get both series in one complete set!  Oh, don’t forget, Wright has a wonderful narrator to bring her stories even closer to the heart.

I am a lover of books, both reading and writing. 2018 marks the beginning of my own journey from writer to published author. This blog will showcase various authors' thoughts on the elements of novel crafting, and my attempts to find my voice in writing. While journaling this journey, I hope to encourage others to follow their dreams. Book reviews continue as I have the last four years, only making time for my new pursuits.
View all posts by eileendandashi →
This entry was posted in Action/Adventure, Audiobook, Audiobook Review, Book Reviews, Historical Romance, Romance and tagged Audiobook Review, Cynthia Wright, Rakes and Rebels Series, Touch the Sun. Bookmark the permalink.