Book Review: WITH EVERY KISS by Nancy Lee Badger ~ go camping in the White Mountains of New Hampshire where more than trailers and vans are found

Posted on November 10, 2017 by eileendandashi 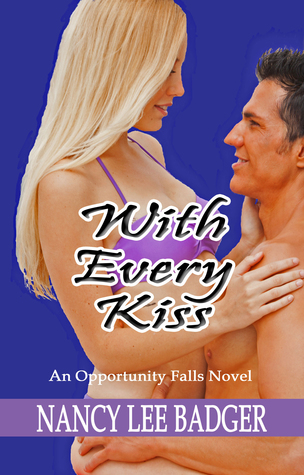 Publisher’s Summary:
Abigail Huntington is a successful artist burned out by life in New York City. She is more comfortable wearing jogging attire, than the silk dress and heels she wears to the opening at the gallery showing her work. She formerly worked at an Atlantic City casino while collecting unsold paintings in her cramped apartment, but an accidental meeting with an agent turned her into a success. Bored by the city, she needs to get away to paint, and starts asking around about New England campgrounds.

Mitchel Henry Campbell is the corporate lawyer who wants to bed her. He’s watched her jog by his office building for weeks. Recalling happier times in New England at his aunt and uncle’s campground near Opportunity Falls, he grumbles when his father orders him to attend an art show. He overhears a woman asking about campgrounds. When he realizes she is the jogger he yearns to kiss, he moves in to help. After he stops at a painting he wants to purchase, he cannot help kissing her. When he disappears minutes later, Abigail is left fuming. Meeting him again in a campground in New Hampshire is a coincidence…or is it?

My Thoughts:  I liked the fact this story’s setting moves from a fast-paced city where Abigail nor Mitch are happy to the White Mountains of New Hampshire, where  they can be more of whom they are.  Abigail is city savvy, but slightly innocent in allowing herself to be in vulnerable circumstances.

Mitch feels restricted by his controlling father building an empire in the corporate world.  Mitch has always toed the line.  He knows his dad still misses his wife, a good number of years dead.  Mitch did, too.  But luckily, he’d had the love of his aunt and uncle who’d taken him under their wings when his mom died, having him live in the campground. His remembrance of that time gave him a heart, but the life in New York has made him lose sight of who he wants to be.

Abigail loves her work as an artist, but her batteries need recharging.  She needs to get away into nature, to create the naturistic pictures she’s known by, which hold a hint of magic.

Mitch is a character I had trouble getting to like, not until far into the story.  It took him some time to get over himself, and stop being so self-centered utilizing his lower anatomy to think!  He is so focused on getting Abigail into his bed.  He basically set her up, arranging a stay for Abigail at his aunt’s and uncle’s campground, dropping brochures here, a won free-week stay at the campgrounds, and if that weren’t enough, a couple of gift certificates for dining in town.  He also backs out of a business trip to Europe using his uncle’s workload and supposed surgery to spend the summer at their place as their handyman.  (hoping Abigail would show)

Abigail takes the bait, drives her new trailer and truck up to the campgrounds.  Who’d have thought she is such a klutz?  She creates some very funny situations and Mitch seems to be in the wrong place at the time.  Ouch!  I was happy to see him work for what he wants.

Even when Mitch finally realizes he wants much more than bed play in his relationship with Abigail, can a trusting relationship of value ever work when grounded in trickery?  Can Abigail’s deep attraction to Mitch excuse the falsehoods which come to light?

Badger takes the reader into the White Mountains of New Hampshire.  Obviously, she knows the area well with descriptive natural scenes I can envision.  The story engages on several fronts: the beauty and danger of the White Mountains, family love and loyalty, the changeability and volatility of the weather, the danger women can face, even outside of the city, and above all the need to follow your heart in matters of the heart.

I am a lover of books, both reading and writing. 2018 marks the beginning of my own journey from writer to published author. This blog will showcase various authors' thoughts on the elements of novel crafting, and my attempts to find my voice in writing. While journaling this journey, I hope to encourage others to follow their dreams. Book reviews continue as I have the last four years, only making time for my new pursuits.
View all posts by eileendandashi →
This entry was posted in Action/Adventure, Book Reviews, New Book Release and tagged An Opportunity Falls Novel, Book Review, Nancy Lee Badger, With Every Kiss. Bookmark the permalink.

1 Response to Book Review: WITH EVERY KISS by Nancy Lee Badger ~ go camping in the White Mountains of New Hampshire where more than trailers and vans are found