Review: THE NUTCRACKER REIMAGINED ~ a Christmas collection of several genre, but all have love

Posted on October 31, 2017 by eileendandashi 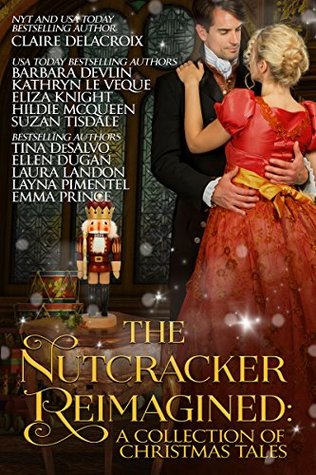 A MASTERPIECE OF HOLIDAY STORYTELLING…

Imagine, if you will, that it is Christmas Eve.

The candles are guttered, one by one, and a hush falls over the grand parlor. The children have gone to bed, and a tall, gloriously decorated Christmas tree looms in the shadows of the hearth’s dying embers. Beside the tree a nutcracker stands guard, its broken jaw cradled in a kerchief tied about its head. All is quiet in this dark, peaceful scene until the long case clock chimes. Dulcet tones form a gentle symphony, and the parlor comes to life.

Lose yourself in The Nutcracker Reimagined, a collection of eleven Christmas tales based on the most treasured characters from the famous holiday ballet, The Nutcracker. Sugarplum fairies will dance in your head, as armies of mice and legions of dolls do battle, and a wounded nutcracker and his lady fair become the stuff of which legends are made. From Arabian dancers to living flowers and hosts of angels, enjoy these tales as reimagined characters from the beloved Christmas tradition find their own happily ever after.

And as the clock’s chimes signal the approaching sunrise, you’ll awaken from these magical stories to discover it has all been a beautiful dream of a retold Christmas classic.

My Thoughts: This was just lovely reading.  I began at the beginning and have been reading at my leisure.  The Mercenary’s Bride is the telling of a love, a love Mhairi held deep in her heart for a man ostracized from his clan, for daring to teach Mhairi, daughter of the clan how to use a crossbow and dagger, against specific commands from her da. This novella will be the first of a series author Claire Delacroix is starting.

Kathryn Le Veque’s Realm of Angels, unique in its presentation of the Mouse King, is a fantastic tale about a man who survived a fire, terribly scarred.  His heart is wounded and seeks being close to a woman he loves, but carelessly let go six years ago for the lure of wealth and land. He works in the kitchen of her castle, masked to cover the hideousness of his face.  This one is very touching and a testament that past errors can be overlooked when compared to the good wrought in the present.

Once Upon a Christmas Knight by Barbara Devlin moves us to London, 1813.  Scandal is the dominant power molding lives, but the strong can survive. Percival Henry Forester Howe receives the whiplash of untruths and ton gossip.  He wishes he could have offered for Margaret Hogart, but it is no way to start a marriage – she, too, would be shunned by the ton.  Just has his situation clears, he receives a visit from Margaret’s father who’s in a rather financial pickle, being swindle by a so-called investor. Percy is very good with his investments and has high standing among the influential. Margaret’s father offers Margaret in marriage.  Margaret is a rather shy woman, retiring, but plays the piano exquisitely.  Can she be convinced to willingly marry Percy?

Suzan Tisdale writes a brilliant tale titled Rodrick the Bold. Taking place in 1357, he makes the usual wish upon a star on Christmas Tide – “I want naught more than a wife and bairns of me own. A family and home to call me own.”  With strange dreams plaguing him, does what they ask – seek out Muriel McFarland, daughter of a warrior who had past. Tisdale has me weeping for the plight of Muriel.  She is poorly used by and man and wife who say her father had owed them money.  She is to work it off.  Her brother not there to protect her, she finds she’s sold twice. Rodrick is her savior, but Rodrick can’t figure out why he’s spending so much time and money to find her for a man he should bother with.

Mayhap I have lost me mind, he quietly mused. Here I am, running around the Isle looking for a lass I have never met….Why are ye doin’ this to yerself? He had asked that question more than once in the past two days. Riskin’ yer own neck fer a lass ye’ve never met and fer a man who tried to kill ye.

On a side note:  Rodrick has a love-hate relationship with his horse, Caderyn.  It is the humor breaking a very bad and dangerous situation.

Lovely Quote: Two lost souls stood in front of a tiny window in a small room at an inn. One wishing to die, the other wanting desperately for her to live. Once cried a river of tears, the other offered up whatever he could to console her.

Prelude to the Highlander’s Gift, written by Eliza Knight, is quite humorous.  Bella Sutherland, daughter of the Chieftain of the Sutherland Clan, must wed. Her father gives her no choice, other than one of the men at the ball they sponsored, must be her new husband.  She had decided never to marry for she has a secret.  Stumbling upon a conversation of some merit, a warrior has been denied marriage to Princess Elizabeth.  It’s because he is missing an arm, from battle.  She’s also heard he has other injuries.  Bella seizes upon the moment and claims the warrior for herself. What is nice about this one, it’s a prelude to The Highlander’s Gift, releasing in 2018.

The last one I’ll speak on, although there are four more stories, is Brash: Frederick by Hildie McQueen.  Remember, readers, this is 677 pages long! This one takes place in Montana. Kennedy Brooks is short of help, in fact desperate for it. Rick Edwards, in search for his love-struck sister’s groom, happens upon Kennedy’s farm; she’s thinking about selling and he just might be interested.  Kennedy has just come off a divorce, her ex found cheating. Animals play a large part in this contemporary romance. This is a story where hero and heroine go after what they want!

Bottom Line:   Lovely collection of happy ever afters ready to be read and enjoyed as you purchase your tickets to see The Nutcracker Suite ballet this season.

I am a lover of books, both reading and writing. 2018 marks the beginning of my own journey from writer to published author. This blog will showcase various authors' thoughts on the elements of novel crafting, and my attempts to find my voice in writing. While journaling this journey, I hope to encourage others to follow their dreams. Book reviews continue as I have the last four years, only making time for my new pursuits.
View all posts by eileendandashi →
This entry was posted in Book Reviews, Christmas Story, Contemporary Romance, Highland Romance, Highland Stories, Historical Romance, Medieval Romance, New Book Release, Novella, Romance and tagged Christmas Collection, Novellas. Bookmark the permalink.