Early Review: SAVAGE OF THE SEA by Eliza Knight ~ Highlander and English pirates plundering the seas, and doing it together! Whoa! That’s a first!

Posted on October 24, 2017 by eileendandashi 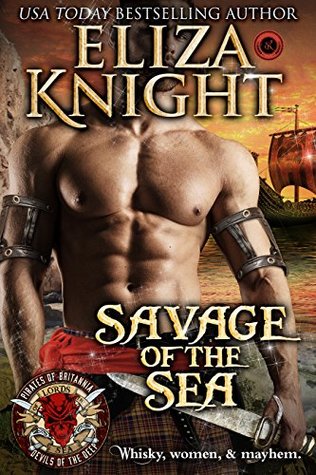 Get your daggers and cross-bows out lassies!  We’re going pirating!

A daring brotherhood, where honor among thieves reigns supreme, and crushing their enemies is a thrilling pastime. These are the Pirates of Britannia.

When Highland pirate prince, Shaw “Savage” MacDougall was invited to a deadly feast, he didn’t know that saving a wee lass would forever change his future.

A lady with a dangerous secret

Lady Jane Lindsey, widowed at a young age, seeks refuge from her departed husband’s vengeful enemies. For five years, she’s held a secret that could cost her everything, including her life. When her safety is compromised, she reaches out to the only man who’s protected her in the past, and offers him a bounty he cannot refuse.

A Highland pirate determined to save her

Shaw’s life is perfect. Whisky, women and mayhem. He wants for nothing—until Lady Jane presents a treasure he’d never considered possessing. Is he willing to risk his lethal reputation in order to save a lass he barely knows, again? Will she trust a pirate to see their arrangement through to the end? And what happens when perilous battles turn to sinful kisses? Who will save them from each other?

My Thoughts:  Who doesn’t like pirates and battles on the sea? I know I certainly do.  Author Knight uses her imagination and creative juices to create a likeable bad guy, one of the most ruthless pirates, who can’t seem to help/deny himself loving one wee lass whom he saved from certain death when she was only 16.  Not only does he save her then, but saves her on other occasions. Lady Jane is wary, for all of that.

The rules of courtship for a pirate aren’t as Lady Jane expects, but this wily, handsome and yes, honorable pirate, is the one who has gotten under her skin (damn him anyway!).  Lady Jane is a widow, made so by the death of her young husband, William.  Livingstone, a noble, has Shaw do his dirty work. Shaw MacDougall, Prince of the Devils of the Deep, also known as Savage, wants his coffers full and is used to dirty work. He’s ready to collect his gold, but doesn’t know what he would be doing.  Livingstone tells Shaw to follow William’s wife, who’d been taken to a room in the tower, and get rid of her.  Doing as told, he finds her fighting off a man intent on raping and no doubt killing.

Now, there is one thing Shaw cannot tolerate.  It is abuse of women. He saves the lass, taking her to an abbey where her aunt lives and for six years all is quiet.  She knows not if Livingston thinks her dead. Word comes to the abbey, Livingstone’s making a tour in the country and will be coming to the abbey soon.

That’s when things heat up. Lady Jane had been keeping in touch with Shaw a couple of times a year, but less more recently.  Shaw has his castle on Scarba, an island he owns. She sends him a message through an old fisherman that she is in danger.  Shaw comes immediately taking her on board his ship.

Shaw wants Lady Jane, however, he never forces a woman.  When he saved her six years past, she was but a girl. Now she is a luscious curvaceous beautiful woman. He wants to save her, for in his heart he’s always held a candle to her, his head hasn’t caught up.  Lady Jane won’t travel with Shaw unless he marries her, yet she’s in desperate need to escape the abbey.  The scene of negotiation is artfully crafted and one of the more humorous scenes. The kiss, sealing the agreement, has Lady Jane’s attention.  She’d never been kissed so by her husband.  But what it does to Shaw!

Nothing is easy on the sea. If nature doesn’t have you fighting for your life, another pirate ship with its own agenda can easily do you in.  Between just keeping alive and the tumultuous feelings Shaw and Lady Jane have for each other, make this story humorous, yet evoking apprehension for the danger Lady Jane is in.  Does she move from the frying pan to the fire?

Shaw MacDougall, Prince of the Devils of the Deep, for all is ruthlessness is quite a wonder. His men adore him.  Adoration comes with fairness and respect, so we get much the measure of the man through his interaction with his men.

I enjoyed the brotherhood Shaw had with Constantine Le Breque, whose stronghold is in Cornwall. He is the leader of the English pirates, another a gang of pirates, only English, equally as strong and savvy as Shaw and his Highlanders. Who would have thought Scotland and England could have actually worked together during those times?  I guess pirates are pretty smart!

Prepare yourself for this excitement-filled series.  Kathryn Le Veque releases Leader of Titans end of November.

I am a lover of books, both reading and writing. 2018 marks the beginning of my own journey from writer to published author. This blog will showcase various authors' thoughts on the elements of novel crafting, and my attempts to find my voice in writing. While journaling this journey, I hope to encourage others to follow their dreams. Book reviews continue as I have the last four years, only making time for my new pursuits.
View all posts by eileendandashi →
This entry was posted in Action/Adventure, Book Reviews, Highland Romance, Historical Romance, New Book Release, Romance and tagged Book Review, Eliza Knight, historical romance, Pirates, Savage of the Sea. Bookmark the permalink.

3 Responses to Early Review: SAVAGE OF THE SEA by Eliza Knight ~ Highlander and English pirates plundering the seas, and doing it together! Whoa! That’s a first!