Posted on October 19, 2017 by eileendandashi 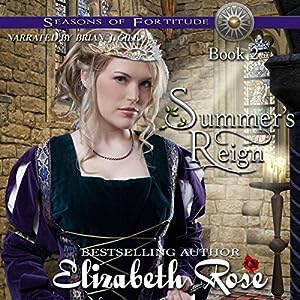 Publisher’s Summary: At a young age, Summer has sacrificed herself for the sake of her family by marrying the evil and abusive Baron Mowbray of Suffolk. A few years after birthing him a son, the baron mysteriously dies, leaving her toddler heir to his estate. The king grants Summer one month to find and marry a man of her choice. But Summer would never consider marrying any relative of her late husband, especially not his domineering nephew.

Sir Warren Mowbray returns from battle to find his uncle has died and with him went the man’s promise that Warren would inherit his holdings. Now, to add insult to injury, the king has assigned him as the widow’s guardian and advisor while she chooses a husband. Once he arrives at the castle, he discovers Summer is a beautiful, smart, determined woman but with a mind of her own. He plans to woo her, but she wants nothing to do with him. He also has his suspicions that the hated baron might have been murdered – and Summer is the main suspect.

Can a strong, determined woman and a controlling warrior find love between them or will they destroy each other first?

My Thoughts:  Summer was no wilting flower.  Yes, she went under the axe for her family, married at 14 to a man to bring peace between the families, but hated her life.  Her husband, Baron Mowbray, died suddenly in his sleep.  He is a bastard in every sense of the word in his manner toward his wife. Author Rose depicts well how some women were just commodities in these times. With that moment came Summer’s freedom, but little did she know how to use it!  She certainly knew one thing.  She didn’t want to be dictated to by a man and with this thought she took over the keep.

The King had already set things in motion for her to remarry. Ugh!  She did get him to give her one month to find her own husband.  She didn’t want another baron, a man who bedded her over and over, even immediately after a miscarriage.  She had several of those.  With each one, Baron Mowbray showed her less respect.  She became a brood mare without any rights!

When the king sent Mowbray’s nephew to protect her until she married, she baulked at the very idea.  No one with the name of Mowbray could be good. Summer has a rather quick tongue much to the reader’s amusement.  The narrator does a fine job putting the reader directly in scenes which are highly amusing.

Summer shows her very worse, and becomes quite the wild little thing. It doesn’t put Sir Warren off, however, it only piques his interest and desire for her. He hopes to marry her. She is determined to run her keep, making decisions of her own and dealing with the surfs.  We see the mettle and intelligence Summer has.

Sir Warren has a wee bit of a problem he has managed to keep from most people.  Only his closet men know.  He sleepwalks.  This has made him a hero on the battlefield, but here at the keep, he gets himself into a bit of a pickle.  Fun stuff!

There is a bit of a mystery going on which Sir Warren is eager to solve.  He doesn’t believe his uncle died naturally.  Who did it?  Who would gain from his death?  There are worthy possible perpetrators. Is anyone within the family also in danger?

I enjoyed the fast-paced narration, produced by Brian J. Gill, being one of my favored narrators with his accents and voice inflexions.  The old midwife’s voice and wisdom were high points in the telling, along with Edna, the sister-in-law to Summer. The mystery, the romantic inclination Sir Warren has and Summer’s denial of her inclination and interest in Sir Warren, make for a hilarious, entertaining listen.

I am a lover of books, both reading and writing. 2018 marks the beginning of my own journey from writer to published author. This blog will showcase various authors' thoughts on the elements of novel crafting, and my attempts to find my voice in writing. While journaling this journey, I hope to encourage others to follow their dreams. Book reviews continue as I have the last four years, only making time for my new pursuits.
View all posts by eileendandashi →
This entry was posted in Audiobook, Audiobook Review, Historical Romance, Medieval Romance, Uncategorized and tagged Brian J. Gill, Elizabeth Rose, Historical Medieval Romance, Seasons of Fortitude Series, Summer's Reign. Bookmark the permalink.