Released Today! DARKWOLFE by Kathryn Le Veque ~ one particular skirmish along the marshes brings Troy back into the light! An author I highly recommend — experience the grit, depth of honor and need to protect what is yours…

Posted on October 18, 2017 by eileendandashi 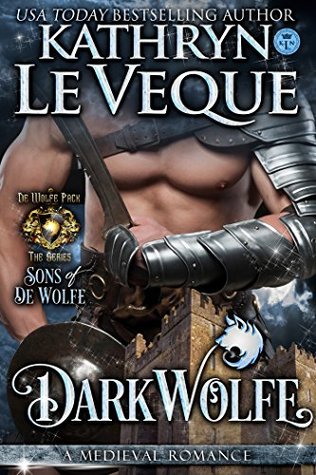 An English knight with inner demons meets the Scottish lass who will kill those demons….

Following a terrible tragedy that robbed him of his wife, the dark and fiery second son of the Wolfe of the Border finds solace in battle….

Quick to temper, and an aggressive fighter, Troy de Wolfe is at the helm of his father’s army when it subdues a smaller castle south of Kelso. Assuming command, Troy is in the heart of Scots territory and the Scots aren’t happy about it one bit. Trying to gain peace with a powerful clan, Troy is tricked into fighting a warrior of the clan chief’s choosing. Imagine his surprise when that warrior turns out to be the clan chief’s daughter…

And Troy is forced to marry her.

So begins a very volatile – and very funny – relationship between Troy de Wolfe and Rhoswyn Whitton Kerr. But the contentious relationship soon becomes one of genuine affection and eventually love, and Rhoswyn must call upon her warrior skills to save her husband against those clansmen who would see him harmed. Follow Troy and Rhoswyn to the end of their happiness rainbow among the gentle hills of the Scottish marches.

My Thoughts:  World-building is an art.  Truly.  As I read each one of Le Veque’s over 60 novels, I become more and more immersed in her stories.  It’s like going home, time after time when I again encounter William de Wolfe, his sons, wives and offspring.  The author creates such noteworthy personalities, full of charm, honor and charisma you are compelled to understand the inner demons woven into a man’s soul. Even though set in days long gone by, human frailty and what pushes a man to react as he does, stands in good stead for these times.

Her characters with their challenges and emotion drive the story forward in a setting which has always captivated me.  If you haven’t had the chance to experience her world, make sure you begin this series.

As far as Troy was concerned, twin brother to Scott, life ceased to exist when his wife Helene and his two children were swept away in a drowning.  For three years he’d only existed, but always obedient to his father, William de Wolfe.

A battle ensues, removing reivers from Monteviot Tower, property of Keith Kerr, a keep not far from his father’s outpost, Castle Questing.

Red Keith Kerr decides it is time to remove the English as a threat, although he hadn’t had a problem with the de Wolfe’s.  It is against the Scots makeup to want any English around to monitor their comings and goings. Keith’s a crafty man, but also a man with compassion buried beneath his haughty exterior and dirt. He cooks up the idea he’d like to have his daughter marry the son of de Wolfe, Troy. The English wouldn’t be enemies, but tied together in marriage. Crafty he is, as I said.

Scenes follow where two fathers try to reason with their young.  William has an easier time of it, because Troy, as a knight, knows he must obey his father, and the girl did win the fight. But Rhoswyn is a little she-devil, escaping and fighting her own people, something like a mad woman.  But apparently, her da helped her see reason, also honor is at stake from her side. It all happens so fast!  I’m sure they are both in shell-shock.

Red Keith Kerr wanted a son from his wife, but a girl child was born.  Once his wife passed on, he molded his daughter, Rhoswyn, into a warrior.  She’s smart, clever and not above using surprise of her gender in battle as you’ll see when facing Troy in battle garb.  It’s just enough of a hesitation she needs to get the upper-hand.  She’s also exceedingly beautiful, that is, when she discovers there are such things as soap and a comb!  I so enjoyed seeing her transformation.  I loved Rhoswyn’s esprit de corps and determination to fit into Troy’s life after she finds Troy to be only kind and encouraging to her.

You can take the warrior out of battle, but you can’t take the battle out of a warrior.  A another point, you’ll enjoy in this story.

Troy learns a lot about himself in this story.  He learns life does offer second chances, and love can be found again if you are willing to let it.

As in any wonderful romance, the writer creates scenes which keep me teary-eyed and others all-out bawling.  I hope you’ll take time to discover the de Wolfe’s.  A family made of grand stuff!

I am a lover of books, both reading and writing. 2018 marks the beginning of my own journey from writer to published author. This blog will showcase various authors' thoughts on the elements of novel crafting, and my attempts to find my voice in writing. While journaling this journey, I hope to encourage others to follow their dreams. Book reviews continue as I have the last four years, only making time for my new pursuits.
View all posts by eileendandashi →
This entry was posted in Action/Adventure, Book Reviews, Highland Romance, Highland Stories, Historical Romance, Medieval Romance, New Book Release and tagged Book Review, DarkWolfe, de Wolfe Pack Series, Historical Medieval Romance, Kathryn Le Veque. Bookmark the permalink.