Review: AN AMOROUS DANCE by Jessica Lauryn ~ a theater in chaos spawns evil ~ a real page-turner

Posted on October 8, 2017 by eileendandashi 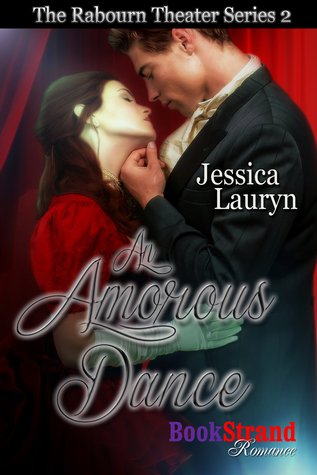 Publisher’s Summary:
When Hannah Rabourn, daughter of Rabourn Theater’s late owner, is attacked, a surge of flashes prompts her to consider that her father may have been murdered. Hannah’s antagonistic stage director insists her subconscious is merely seeking closure. But as she and Evan become close once again, Hannah’s suspicions about the past deepen, and she wonders whether the man she’s falling in love with for the second time knows more than he’s letting on.

Evan Masters’s dreams were shattered when theater-owner Baron Rabourn destroyed his budding acting career. Having forged an alliance with Rabourn’s former partner, Evan assumed a mission to transform Rabourn Theater into what it always should have been. Fellow conspirators believe Rabourn’s daughter is the key to power, and Evan is the means by which to achieve their ends.

But Evan’s feelings for Hannah are stronger than he believed. And when he realizes Hannah’s life is in danger, he must decide between his passion and his heart.

**An Amorous Dance, and all stories in The Rabourn Theater Series, are stand-alone titles**

My Thoughts:  I’ve quite enjoyed living in the world of theater.  Lauryn’s descriptive ability puts me in dark theaters, and places few knew existed within the walls of the building. With her canny ability to weave together complicated main-character histories and its effect on the actors/actresses and a once lost-love affair beginning to re-simmer, makes an intriguing and worthy read.

If you didn’t read book one of the series, you’ll still be able to enjoy this story, but I’m glad I read the first one, because it helps set up the stage of creepiness which surrounds Hannah, the daughter of the previous owner of Rabourn Theater.  Her father died suddenly on a night at the theater—a night she has a hard time remembering.  Bits and pieces of the event slip in and out of her mind. Her memories of her father would come back to her while sitting in the stillness of the theater, alone with her thoughts, but that night was shrouded in a mist.

Actors and actresses have huge egos, I suspect they wouldn’t be very good at what they do if they hadn’t. Hannah’s self-esteem is low.  She thought she was a good actress. She was told so, but the part she craved to have when eighteen, she didn’t get.  It’s unusual since she was the daughter of the decision-maker.  The play is to be performed again, reigniting old memories.  This puts her even more on edge.

At eighteen she had another incident which crushed her—a man she loved just walked away from her, Evan Masters. Being her father’s daughter she took it stoically after a bout of tears.  It changed Hannah. She became hard and finds it hard to trust anyone.

Yes, Evan Masters had once had Hannah’s heart.  Now, with several accidents within the theater he appears to want to keep her safe, and Hannah soon realizes her heart is softening towards him.  But could he be behind all the problems?  She believes he is and can’t quite trust him.

Hannah hadn’t realized how vulnerable she was while alone in the theater until there appears to be several attempts on her life.  Who in the theater would be behind these attacks?

Dissension runs rampant in the theater, people not pleased with its artistic focus.  Hannah has just about decided to sell it.  The problem wouldn’t be hers then.

Lauryn writes a suspenseful plot, not showing her hand, with twists and surprises along the way, with several possible candidates for the villain, always keeping me guessing.  She keeps the suspense coiling ever so slowly, until you can’t possible put the story down.

I hope you try Lauryn’s work.  This series is a good place to start.

I am a lover of books, both reading and writing. 2018 marks the beginning of my own journey from writer to published author. This blog will showcase various authors' thoughts on the elements of novel crafting, and my attempts to find my voice in writing. While journaling this journey, I hope to encourage others to follow their dreams. Book reviews continue as I have the last four years, only making time for my new pursuits.
View all posts by eileendandashi →
This entry was posted in Action/Adventure, Book Reviews, Contemporary Romance, Romantic Suspense, Suspense and tagged An Amorous Dance, Contemporary Romantic Suspense, Jessica Lauryn, The Rabourn Theater Series. Bookmark the permalink.