Review: HEIR TO THE SEA by Danelle Harmon ~ roam the seas to be caught in treachery and pain, only to find your destiny

Posted on October 7, 2017 by eileendandashi 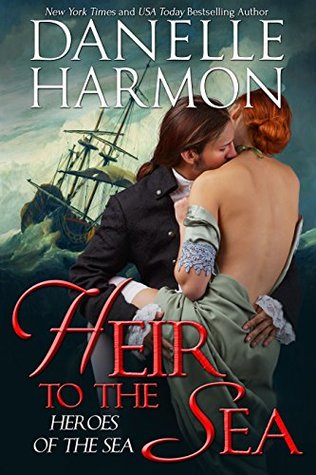 HERO OF THE SEA: His life devastated by tragedy, privateer Captain Kieran Merrick, youngest son of a famed New England seafaring family, sets sail for his childhood home to confront bittersweet memories. When he encounters a merchant ship adrift in the Caribbean, he discovers something he never expects … a red-haired, pistol-wielding virago hiding in its cabin.

BALTIMORE’S SCANDALOUS BEAUTY: Rosalie McCormack can sail a ship, shoot a gun, and run a business. But she’s fleeing scandal, and now savage pirates who seized her family’s merchant ship have something both she and her handsome rescuer want. Through their unexpected attraction, can these two wounded souls overcome danger, deceit and the cold wrath of a brutal pirate to discover a love that could heal them both?

“The thing about grief is how it moves at its own pace. Comes when it will, stays longer than a houseguest whose departure is long overdue.”

My Thoughts:  I can’t fathom why I haven’t read more of this series.  I caught the first two books and then got sidetracked. So I have some catching up to do!

When you want sea battles that make it difficult to catch your breath, when you want heroines and heroes who make you believe in humanity, when you need treachery and despicable antagonists to be eliminated, you’ll find it and more in this book.

I enjoy how Harmon sets up the chapters, using Captain Kieran Merrick’s journal/ship’s log to know Kieran, his wit, his kindness and his frustration.

I totally love the way Liam Doherty, first lieutenant, is steadfast in his loyalty and need to protect Kieran.  He bowls me over with his strength and determination to keep Kieran safe. He is very much hurt when his old friend, Brendan, lost his life.  (This is where I need to make sure I catch the preceding books. Connor, Kieran’s brother, is somehow responsible for his parents’ deaths.)

The Kestrel, the famous sloop Brendan designed, faster and lighter than anything on the seas, has been sunk by a pirate with his parents on board.  It has left a deep gouge of hurt in Kieran’s heart, which keep on deepening, until he explodes.  Kieran is the sort of man who is soft-spoken, cool-tempered and logical.  Hurt can only be held in for so long, however; pain of losing his parents is crushing him. He doesn’t realize how much anger he holds until he sees his brother again.

If it hadn’t been for Rosalie McCormack, he may have lost it long before seeing his brother.  Harmon creates a relationship between the two which gives Kieran a headache, Rosalie’s chatter is constant and she badgers him to help find her brother.  It made me laugh with the humor of it all.  The situation is complicated because on the seas, privateers and pirates are looking to gain goods and supplies belonging to another.  The pirates are treacherous, kill without qualm, as we find when the Sandpiper, Kieran’s ship, is taken.  Rosalie’s brother’s ship was taken and retaken so many times, it makes my head spin.  Eventually, Kieran holds claim to it, finding Rosalie locked in the Captain’s cabin.

Rosalie sees beyond what the captain wishes to show her.

Captain Merrick. Her glance moved surreptitiously to her right. He had left the helm to Liam Doherty, glanced aloft to gauge his crew’s progress in setting the studding sails and, apparently satisfied, had gone to lean against the rail, his face tight as he gazed off over the rolling blue sea. Rosalie was keenly aware of him. Indeed, it was impossible to not be aware of him, and she wondered why the best-looking men were either the most unsuitable, the worst in character, or the biggest breakers-of hearts. Captain Merrick though, with his distant eyes and preoccupied manner, his handsome mouth and unruly dark hair, did not see life a breaker of hearts.
He seemed like a man who had, instead, had his heart broken.

Harmon creates heroes easy to fall in love with.  I’d like to take Kieran home!

If you haven’t read Harmon, it’s time to start.  Her books are delightful, with characters to lighten your heart, with battles which leave you breathless, and with extended families and communities ready to squash evil.

I am a lover of books, both reading and writing. 2018 marks the beginning of my own journey from writer to published author. This blog will showcase various authors' thoughts on the elements of novel crafting, and my attempts to find my voice in writing. While journaling this journey, I hope to encourage others to follow their dreams. Book reviews continue as I have the last four years, only making time for my new pursuits.
View all posts by eileendandashi →
This entry was posted in Action/Adventure, Book Reviews, Historical Romance, New Book Release, Regency Romance, Romance and tagged Book Review, Danelle Harmon, Heir to the Sea, Heroes of the Sea Series, historical romance. Bookmark the permalink.

2 Responses to Review: HEIR TO THE SEA by Danelle Harmon ~ roam the seas to be caught in treachery and pain, only to find your destiny