Audiobook Review: LESPADA by Kathryn Le Veque ~ experience how love changes a man’s marriage of obligation to a marriage blessed by angels.

Posted on October 6, 2017 by eileendandashi 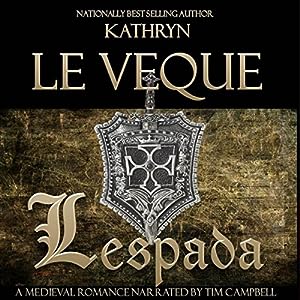 Publisher’s Summary:  1264 A.D. – Davyss de Winter is the champion for King Henry III, a powerful and arrogant man who descends from a long line of powerful knights. He is also a much-sought after man and has had more than his share of female admirers, including a besotted baron’s daughter who bore him bastard twins.

His mother and family matriarch, the Lady Katharine de Warrenne de Winter, loses patience with her son’s behavior and betrothes him to a woman she hopes will tame his wild ways. She selects a young woman from a lesser noble family with no political ties or ambitions, a perfect match for her son’s prideful personality.

Enter the Lady Devereux d’Arcy Allington; a young woman of astounding beauty, she wants nothing to do with Davyss. When Davyss, in protest of the marriage, sends his sword Lespada to the marriage ceremony, Devereux is beyond offended. Livid, she battles tooth and nail, refusing to marry a sword by proxy, until Lady Katharine intervenes. Cornered, Devereux is forced to marry Lespada because her groom refuses to show up for the ceremony. When Davyss gives in to his curiosity and meets his wife for the first time, he is overwhelmed with her beauty.

Roughly consummating the marriage, he has set the tone for what both Davyss and Devereux believe will be a loveless, hateful marriage. But when Davyss begins to realize what he’s done, he swallows his considerable pride and is determined to get to know the woman he married, a woman of grace and compassion like nothing he has ever known before.

Though trials and tribulations, Davyss and Devereux’s bond only strengthens. When Davyss is involved in the Battle of Evesham against Simon de Montfort, Devereux faces her own life and death situation.

Memorable Quote: “Esteem comes from the heart, not the hand.”

My Thoughts:  This story strikes a sweet chord with me. Hero is obliged to marry Lady Devereux, because Lady Katharine, his mother, decides the matter.  Lady Katharine, a bitter, strong, determined old woman is very controlling and neither son, Davyss or Hugh, dare go against her.  Holding the purse strings of the de Winter family, the men can’t deny her wishes.  She holds losing their inheritance over their heads, which makes a delicious story when you learn what each character is made of.

Davyss is the kings champion, leading his army. His uncle and godfather, whom he loves very much, a last link to his father, other than his mother, is against the king.  In fact, his uncle uses his close relationship with Davyss to undermine his fealty to his king.

Davyss marries Lady Devereux through proxy – his sword Lespada, is sent to represent him. He does what his mother wants, but does it his way, with a bit of distaste.  Unfortunately, Lady Devereux is not a woman to submit to such a marriage without her wishes or desires met.  She fights tooth and nail with the knights, including Hugh, to keep from being abducted from her home, for that is how it feels to her. She is obliged to submit, but not before bruising the knights, and Hugh’s ego.  While Davyss sees Lady Devereux as proud and arrogant, I, on the other hand, see him and his brother as arrogant and just plain jerks!

Eventually Lady Katharine intervenes and logically talks Lady Devereux down.  She kisses the sword, unwillingly, along with saying yes to the marriage.  Unbeknownst to her, Davyss had come to the ceremony hiding in the shadows.  He’s stunned by her beauty and reconsiders how he’s handled the whole thing. He has a lot of work to mend the situation.

He isn’t aware what a jerk he is, vis-à-vis the way he treats his virgin wife consummating the marriage.  But soon realizes, he was the only one feeling lust, while she was scared, hurt and used.

Hugh is also quite despicable.  He’s an extremely good-looking man, is used to having woman run after him.  After he met Lady Devereux and tried to keep her from flailing around trying to escape the abduction, he whispers in her ear, if she handles it right she could have two brothers and not just one.  Of course, this infuriates Lady Devereux further.

Davyss tries to make amends with his initial approach to Lady Devereaux, but his lusty past of bedding any and all women, time and again, comes to haunt him. Hugh continues making life miserable for both his brother and Lady Devereux.

Davyss comes to love his new wife, to distraction.  She becomes the sun and moon to him.

Lady Devereux for all her spunk and feistiness, isn’t the most careful person and often steps into dangerous situations.

Lady Katharine is a surprise to me. For such an old woman, she is made of steel, a lioness when it comes to protecting her sons.  She is one of my favored characters.

Tim Campbell narrates par excellence, very much in the spirit of the story pacing befitting the action.  His portrayal and desperation of Davyss had me in tears.

All in all, Le Veque once again comes away with a winner.  This tale takes me to a world of excitement, tenderness and passion.

I am a lover of books, both reading and writing. 2018 marks the beginning of my own journey from writer to published author. This blog will showcase various authors' thoughts on the elements of novel crafting, and my attempts to find my voice in writing. While journaling this journey, I hope to encourage others to follow their dreams. Book reviews continue as I have the last four years, only making time for my new pursuits.
View all posts by eileendandashi →
This entry was posted in Audiobook, Audiobook Review, Historical Romance, Medieval Romance and tagged Audiobook Review, Kathryn Le Veque, Lespada, Reign of the house of de Winter. Bookmark the permalink.