Posted on September 30, 2017 by eileendandashi 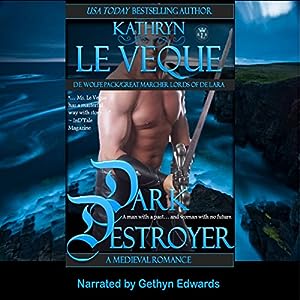 AD 1380. The great-grandson of the legendary William de Wolfe is not as his family had hoped; although a man of legendary skill and strength like his great-grandfather, Gates de Wolfe is something of a legendary rake as well. A man with an eye for women, he has left a string of broken hearts all across England and rumors of at least two bastards, possibly more.

But Gates is also a man of humor, charm, and great charisma, making it difficult for women to resist him and making it even more difficult for men to despise him, because he is such a likable character. Moreover, in battle he is a destroyer – a knight without equal. He is a man to be feared.

Lady Kathalin de Lara is part of the mighty House of de Lara, great marcher lords. A young lady who has been educated in a convent, she is rather naive in the ways of men. When Gates meets Kathalin, he treats her with surprising respect. She is different from other women he has known, and because he greatly respects the woman’s uncle, a close friend, Gates makes no attempt at another conquest. He treats her with great regard. But in that regard, and in declaring she is out of bounds for his usual conquering ways, a seed of attraction for her sprouts.

Gates unexpectedly begins to have real feelings for the lovely Lady Kathalin. But his reputation as a rake works against him. No decent family, including the House of de Lara, will permit him to seriously court one of their daughters, and Kathalin’s family denies his suit. For a spoiled, cavalier man who has always gotten what he wanted, Gates must face the reality that he must actually fight for what he wants and for a love he never knew he could feel. Join Kathalin and Gates on an impossible adventure of life, love, discovery, and devotion that only angels dare to dream of.

My Thoughts:  This listen touched the soul.  So much love, pure and innocent and with such heartfelt intensity and depth, it seared my own.

Le Veque doesn’t use a boiler-plate template for all her stories.  When you’ve read one, you haven’t read any of them, except the ones you’ve read.

Lady Kathalin hasn’t had much in her life.  Not mother or father or brother.  She has spent her life at the abbey, serving the sick and attending the herb garden.  But even the abbey is not safe from men of ill-intent. Luckily, Sir Knight Gates had come to the abbey to collect her for her parents, who’ve sent for her, at the same time an Irish group of men were intent on destruction. Even after saving her life that day, Kathalin is quite insistent not to return with him.  She doesn’t know her parents, she knows the abbey, her sisters-in-God, and lashes out at Gates who eventually trusses her up and puts her on his horse to return her home, her family the House of de Lara.

Gates is a de Wolfe. If you’ve read any of Le Veque’s books, you’ve probably either heard of how great the House of de Wolfe is or have experienced in this series, de Wolfe Pack. Unfortunately, he doesn’t live up to the name of his House.  Although, he is mighty on the battlefield with a close bond to his fellow warriors, he isn’t exemplar in this actions with women.  Frankly, he beds them, and leaves them with or without child. Not so likeable…

Something changes in Gates when he meets Lady Kathalin. She first intrigues him, then interests him. He hasn’t met such a woman before. His feelings for her are different, softer, molding him to a new man.  Others don’t see it, won’t forget his norm with women.  But Lady Kathalin sees goodness in the man.  Yes, he’s charming, handsome as the devil, but he has so many redeeming qualities, she can’t help but fall in love.

Gates’s liege, Jasper de Lara, Lady Kathalin’s father, cares not what Gates feels about his daughter or for her.  He’s determined to marry her to the House of de  Lohrs, a young knight and best friend to Gates, Sir Alexander de Lohr.  I rather disliked Jasper de Lara.  He’s weak, that is to say, he manipulates people with a bullying stance.  Narrator Edwards helps me dislike him with his excellent portrayal of the type of man he is. On the other hand, I liked Sir Alex a lot.  He is most honorable and hope to see him again in another of Le Veque’s stories. Unfortunately, he is placed in a terribly awkward situation.  What is an honorable knight to do?

Another character which sent my emotions in several directions was Lady Rosamunde de Lara, who through time has been hardened by a devastating disease.  Apparently, her heart is well to following her body.

One particular comment to make here.  I enjoyed how Le Veque grew the love people Kathalin and Gates, her delicate handling of Gates’s feelings toward Kathalin, and how Gethyn Edwards takes it to the next level. He also is emotionally charged with the telling.  Very little actually sex in this story and it suit me fine.  Isn’t the journey more important than its destination?

If you love to cry, to touch pure enveloping love, this story is for you.

I am a lover of books, both reading and writing. 2018 marks the beginning of my own journey from writer to published author. This blog will showcase various authors' thoughts on the elements of novel crafting, and my attempts to find my voice in writing. While journaling this journey, I hope to encourage others to follow their dreams. Book reviews continue as I have the last four years, only making time for my new pursuits.
View all posts by eileendandashi →
This entry was posted in Audiobook, Audiobook Review, Book Reviews, Historical Romance, Medieval Romance, Romance and tagged Dark Destroye, de Wolfe Pack Series, Historical Medieval Romance, Kathryn Le Veque. Bookmark the permalink.