Posted on September 23, 2017 by eileendandashi

If you are one of my regular followers, you’ll know what a groupie I am when it comes to Mary Morgan and her magical world.  She’s written a wonderful series titled Order of the Dragon Knights, composed of five books.  It was the saddest thing to me to see the series end.  (But she’s started another linked to this first series, and I’m stoked!)

Take a look at her series on Goodreads.

Now you know what I feel about her writing.  I’m sure her fans can corroborate the same.  I’m so pleased to have Mary on my blog today.  She’s an inspiration and a joy to read.

Thank you, Mary, for popping by and sharing some backstory on how you’ve achieved such a wonderful series.

It is my pleasure to be here.

What was your initial thoughts when you decided to do a series about the Dragon Knights?

On my first trip to Scotland in June 2000, the Dragon Knights were born at dusk within my mind sitting on a boulder in the Highlands. The land called out to me that evening, and I began to create scenarios. Initially, there was going to be seven to nine knights based in Ireland. However, I kept debating on which—Ireland or Scotland. It wasn’t until several years later that I concluded using both countries and only having four brothers and one sister. I took a chance at creating a five book series, and I’m thrilled everyone has embraced the stories.

I love time travel and your books pull me for that very reason.  Why do you write using time travel?

Oh, Eileen…one word comes to mind. History! I have a deep appreciation and interest in historical events and time-periods. You might even say that I’m living vicariously through my heroines, longing to travel back to another era and explore.

Did you have certain pictures you used to help you build the character of each knight? If so, would you share? How do you go about building each person?  Do you list their strengths and flaws?

There have only been two. The first, Richard Armitage for my hero, Duncan MacKay in Dragon Knight’s Sword. Richard can carry so many emotions with one look—be it fierce, joy, or sadness.

The second, Alexander Skarsgard for the hero, Conn MacRoich in Quest of a Warrior. His stance and eyes evoke power. A perfect blend for a Fae Warrior.

I didn’t mention earlier anything about the lovely Quest of a Warrior. This is the book that connects to the first series.  I eager to continue her magical world with this second series.  Take a peek at the cover. I’ve linked my review to the cover.  What an awesome cover! 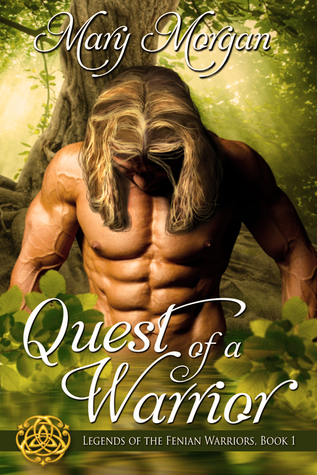 As for my other heroes and heroines, I’ve created them within my mind. At the beginning of each book, I write down as much as possible about the characters—from physical descriptions, moral principles, tastes, flaws, and even quirks. Most of the time, all is not revealed until I begin to write the story. I’m always surprised when something new emerges forth from the character. There have been a few characters who remind me of an onion. I don’t really know them until I start peeling back the layers.

Who read your first draft?  What was their reaction and what was yours?

My daughters were the first to read Dragon Knight’s Sword. They were my first beta readers. I was a nervous wreck. Yet, they fell in love with the story. My oldest daughter doesn’t read romance, so I was thrilled when she told me how much she enjoyed reading the book.

After you completed the story, enough for beta readers to take a look, were any scenes added because of their comments?

No additional scenes were ever added. In fact, my first editor deleted some parts during edits. On my second year as a published author, I included a deleted pub scene for my readers on my blog. One other part didn’t make it into the book. I’m thinking of sharing this with my readers on my five-year anniversary. It dealt with the Fae, and you find out early on who this person really is in relation to the story.

When you were in junior and high school, did you have a certain genre you enjoyed reading in your extra-curricular reading?

Historical fiction and non-fiction. I read Hawaii by James Michener at sixteen. This book set me on the path of my love affair with anything dealing with history. In addition, the further back in time, the better.

When did you start writing in earnest?  What prodded you?

After I returned from my first trip to Scotland, I started writing in a journal and keeping notes on the computer. These consisted of outlining my stories, composing rough drafts of the first book, and building the characters’ world. I used a lot from my trip as a visual for some of the scenes in Dragon Knight’s Sword. When my husband presented me with my first laptop in 2006, he told me to finish what I had started. He believed in my stories and me!

Thank you, Eileen. I so enjoyed chatting with you! xo

I’m so happy to have you here today.  Let’s do it again, as you continue into the second series.

Mary Morgan will soon release a novella, not too short, I’m happy to note.  Here’s the summary and info.

Irish warrior, Desmond O’Quinlan has never surrendered his heart to any woman. He has no wish to have his soul tortured by love. Yet, the moment he locks gazes with Ailsa, his fate is destined for an adventure he never fathomed. He may have battled alongside a Dragon Knight, but his greatest challenge will come from within his own heart.

I am a lover of books, both reading and writing. 2018 marks the beginning of my own journey from writer to published author. This blog will showcase various authors' thoughts on the elements of novel crafting, and my attempts to find my voice in writing. While journaling this journey, I hope to encourage others to follow their dreams. Book reviews continue as I have the last four years, only making time for my new pursuits.
View all posts by eileendandashi →
This entry was posted in Fantasy Romance, Highland Stories, Historical Romance, Interviewing authors, Medieval Romance, Novella, Paranormal, Paranormal Romance and tagged A Highland Moon Enchantment, Mary Morgan, Order of the Dragon Knights series, Quest of a Warrior. Bookmark the permalink.

11 Responses to My Chat with Author Mary Morgan Extraordinaire!