Posted on September 22, 2017 by eileendandashi 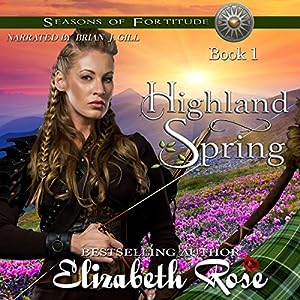 (This series is about the sisters of the bastard triplets from the Legendary Bastards of the Crown Series. Spring is the sister that was stolen as a baby. It is recommended to read that series first, but is not required, as this book stands on its own.)

Spring has been raised as a warrior, always trying to please her father of Viking descent. Through the years she’s tried to be the son he wished her to be. At a young age she’s chosen the bow and arrows of a dead man as her weapon, and now she’s mastered the skill. Growing up without a mother, the only skill she hasn’t mastered is how to be a lady and someday a mother. But now her father decides to marry her off to their enemy, Shaw Gordon, in order to get inside the castle walls. Wanting to be a part of overtaking the castle, she goes along with the plan.

Shaw Gordon, chieftain and laird, is a widower with two boys and one unruly adolescent daughter. He decides it’s time to take a wife again, but never expects to be presented with his enemy’s daughter. The woman is fierce, and nothing like the mother he wants for his children. The Gunn clan has been an enemy of the Gordons for as long as he can remember. While an alliance would be good, he doesn’t trust them. As he’s about to reject the offer, he spots the coveted bow and arrows of his late father in the girl’s hands. In order to retrieve it, he does the only thing he can besides fighting – he marries her.

Can two enemies push aside their differences for the benefit of all? And can a woman draw strength from herself as well as from her new husband when she discovers the horrible secret of her past – that her entire life is nothing but a lie?

My Thoughts: A man who wishes to love again, to provide a woman’s love to his children. A woman, trained as a warrior, not knowing how to love.  Brought together to wed — an alliance of two clans.  Both clans has issues of acceptance.  Will peace take hold?

Spring has always been calmed by rubbing her talisman, a small wooden piece, knawed on as a child, and had since forever. Her father, part of the Gunn clan hardened her soul, making her one of his best warriors. She is an expert with a bow and arrow she found on a dead man, when only ten years old.  Her life has been harsh, but she loves her two brothers.  Her father has always said she and they were triplets, but his statement has always been speculative.

Now Spring is a pawn to capture her father’s enemy, the Gordon clan, to allow him access to take the keep. She’s been married to this man, a man who has three children.  Changes  occur. Spring softens. Love claims her.  How can she betray her new family? How can she betray the family she’s had for 18 years? Is it possible she can keep them both safe?

I enjoyed the story with a definite edginess to it. Spring is put into a perilous situation. Her emotions and understanding of who she is develop the story and propel the plot forward. Love is a powerful force both Spring and Shaw Gordon yearn to experience.

A secondary character I gravitated to was the old woman who is a seer and has been with Shaw for as long as he remembers. She sees the present with several visions.  She sees Summer is to go through several years of turmoil at the end of this story.  She wishes to be with her and so Shaw gives his blessing to have her join Summer.  (Secretly, he’s happy to see her go.  She sees more than he’s comfortable with.)

I enjoyed the way Spring finds herself, her inner strength even in times of uncertainty.  She desire to be accepted by Shaw’s children, for she’s never truly felt she belonged anywhere.

Narrator Brian J. Gill is an excellent narrator, particularly when it comes to a Highland story.  His deep voice and accented dialog make the story even more enjoyable.

A story of warmth, discovery and excepting the truth.  I’m sure to enjoy the next in the series, Summer’s Reign.

I am a lover of books, both reading and writing. 2018 marks the beginning of my own journey from writer to published author. This blog will showcase various authors' thoughts on the elements of novel crafting, and my attempts to find my voice in writing. While journaling this journey, I hope to encourage others to follow their dreams. Book reviews continue as I have the last four years, only making time for my new pursuits.
View all posts by eileendandashi →
This entry was posted in Audiobook, Audiobook Review, Highland Romance, Highland Stories, Historical Romance and tagged Audiobook Review, Elizabeth Rose, Highland Spring, historical romance, Scottish Historical Romance. Bookmark the permalink.

1 Response to Audiobook Review: HIGHLAND SPRING by Elizabeth Rose ~ a Highland story where love finds root in perilous of times