Posted on September 20, 2017 by eileendandashi 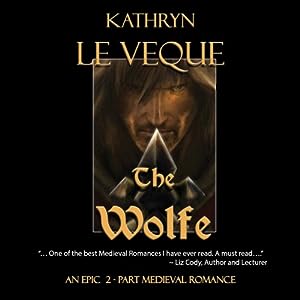 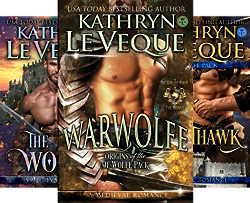 After a nasty skirmish along the England/Scotland border at Bog Wood, a badly wounded knight has crawled off to die. As women from the Clan Scott fan out across the battlefield to collect the spoils of war, one woman breaks off from the pack. She is sickened by the tradition of stealing valuables off the dead and runs off to hide. In her hiding place, however, lingers the badly wounded knight. The young woman is frightened at first but her natural instinct to lend aid takes over. She tends the knight and saves his life. Little does the Lady Jordan Scott know that she has just saved the life of the dreaded English knight known to her people as The Wolf.

My Thoughts: Compelling. Riveting. Mesmerizing. And completely addicting! If I hadn’t been convinced about the caliber of Veque’s work, this book would have been the clincher.

There are few reads which hold me as strongly and as powerfully as this one has.  I opted to listen to the book rather than read it.  By so doing, I could spend numerous hours, in one stretch, living this world of compassion, humor, greed, and honor, with hot-tempered Scot women, and knights irrevocably besotted with them. Never once did I wish the story weren’t so long. Conversely, I wished I could continue enraptured for many more days.

I’m a great fan of Le Veque’s.  I’ve been reading her books now for about four years. With each read, I sink deeper into her engrossing world set in Medieval times.  I often reconnect with characters whose life story or a portion of it has been shared in my previous reads with her.  However, this book gave me a beginning point for the de Wolfe pack.  Lady Jordan and her family, and Wolfe with his knights are forces to be reckoned with.

I swear Le Veque’s pen is dipped in magic as she spins stories of such depth of character, drilling down to the essence of the goodness of people (or not), capturing my emotions. She paced and plotted in such a undeniably convincing manner, I was there.

The narrator, Guy Veryzer, did a fine job. I did have a bit of a problem with listening to the audio. Found it ran better at the 1.25 speed. His voice neither added or detracted from the story. If you are an audio listener, you’ll know what I mean. The book, in and of itself, kept me listening enraptured.

This saga probably could have been divided into three separate books for it tells the story of three young Scot women who marry three English knights.  However, Le Veque pulled the stories into one fascinating read, giving the reader a resounding understanding of life on the borders.  Rather than repeating backstory as another part of the story focuses on another couple, she spends more time enfolding the reader into a richly-detailed environment, while expanding subplots and developing secondary characters.

Truly, if you are a reader of the Medieval period, Le Veque needs to be on your list of authors.  Her books have grit, depth, and compassion for the human plight.

I am a lover of books, both reading and writing. 2018 marks the beginning of my own journey from writer to published author. This blog will showcase various authors' thoughts on the elements of novel crafting, and my attempts to find my voice in writing. While journaling this journey, I hope to encourage others to follow their dreams. Book reviews continue as I have the last four years, only making time for my new pursuits.
View all posts by eileendandashi →
This entry was posted in Action/Adventure, Audiobook, Audiobook Review, Book Reviews, Medieval Romance and tagged Audiobook Review, de Wolfe Pack Series, Historical Medieval Romance, Kathryn Le Veque, The Wolfe. Bookmark the permalink.