Review: SHIELD OF KRONOS by Kathryn Le Veque ~ a story of love and honor — can one take precedence over the other?

Posted on September 17, 2017 by eileendandashi 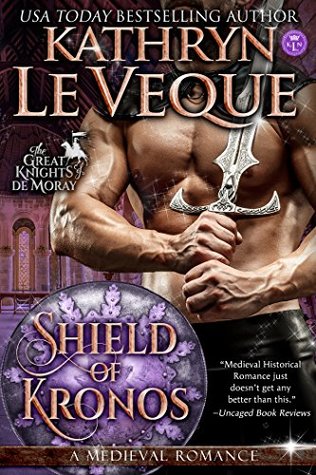 Publisher’s Summary: 1196 A.D. –  Eyes as black as night…. A decorated knight for Richard the Lionheart and an ally of the House of de Lohr, Sir Garret de Moray was a man described as cold… intimidating… foreboding.

A man with eyes as black as night.

Receiving a royal appointment as Captain of the Household Guard, there was no man more qualified or prepared for the role because on the sands of the Holy Land where Garret went on Richard’s great quest, the Christian armies whispered of a knight whose wisdom was ancient. Some wondered if he was the walking dead, an immortal soul who had lived many lifetimes over, because his skill and power exceeded earthly restraints. Kronos, they called him. The father of the gods.

Then came a lady without hope….

Beautiful Lyssa du Bose has lost everything – her father, her home, her family. Taken in by an aunt who was a lady-in-waiting for the Duchess of Colchester, Lyssa finds a quiet existence in the shadows of a great home. A chance meeting with a warrior with eyes as black as night and, suddenly, her perspective on life begins to change. The quiet, sometimes-frightening knight took an interest in her, and she in him. Is it possible that someone should actually want her?

More than she knows. When Lyssa catches the Duke of Colchester’s attention as well, the gentle romance between her and Garret quickly becomes something they must fight to hold on to. When Garret, one of the most powerful knights in King Richard’s stable, is challenged by a married duke who wishes to make Lyssa his mistress, it is a battle that all of London will witness.

My Thoughts: The wheels are set in motion by one man with a vendetta against the Templars.  This man, bastard cousin to the King Richard, is known for his violent vindictiveness when angered.  He is the duke Colchester. While in the battles in Levant, he ties a man’s hands behind his back and threatens his death.

“The Templars are a disease that eats away at the armies of God,’ he said. “They infect everything they touch and they pollute the minds of the faithful!”…

“There is one true God, Savage,” He screamed as he threw his foot into the Muslim’s body. “It is my God. Your god does not exist. Even now, as you are being defeated, your god does not come to help you. But I have the strength of my God behind me. After your death, men will find these weapons of the Templars in your body and know that it is the Templars who have become dishonorable assassins.”

Garret is requested by King Richard to search out Jago de Nantes, aka Alfaar, who left the camp possibly to stir up trouble. He finds Alfaar far from the encampment,  violently abusing a man who has his hands tied behind his back, threatening to kill him.

Garret doesn’t condone killing a man who can’t fight back.  It is not an honorable way to fight.

The scene shows us the caliber and wisdom of Garret de Moray and that of the man Garret saves, who now owes a debt of honor to Garret for saving his life.

“Go back where you belong,’ Garret told him. “Your god has spared you this night, for I have not the time or the inclination to do away with you.”

The Muslim was looking up at him without fear. In fact, there was admirable bravery in his expression considering he was beaten and bound, now facing off against another English knight who appeared bigger, meaner, and far more armed than the one who had captured him.

“Had your hands not been bound, I would not have interfered as I did,” he said. “But there is no honor in killing a man who is at a disadvantage, not even if that man is your sworn enemy. Live to fight another day, Muslim. But remember this night and remember a Christian knight who showed you mercy. Mayhap someday, you will be required to show one of my brethren the same.” …

The Muslim staggered to his feet, weary and wounded. “Allah favors the merciful,” he said quietly, “as I am sure your God does the same. I will remember your mercy, Salibi. May I know the name of the man who save me?”

Garret was reluctant. “Does it matter?”

The Muslim nodded. “it does, as I intend to ask Allah to protect you in battle.”

“I shall pray for you, de Moray.

Six years later, both men follow much the same path.  Garrett’s promoted, now Captain of the Royal Guard, and his notoriety is known in London. He is a leader of men, known for his level-headedness and wisdom.

Duke of Colchester is no longer beating men, but, beating women, thereby still creating trouble, but he is untouchable.  His sexual appetite and imbalance of mind makes him a very dangerous man as the reader will see.

Unfortunately, one lovely lady-in-waiting of the duke’s wife, is in his sight. She is also known to Garret who saves her from ruffians outside a great gathering outside the great hall of Winchester. She makes an impression upon her, even that night. Lyssa du Bose is not the ordinary lady-in-waiting.  She comes to the Duchess Colchester with no mother or father, just her aunt Rose who works and is a long-time friend of the duchess. The duchess is a kind woman.  She tries her best to keep her flock of ladies from the duke.

Le Veque captures the turmoil of Lyssa’s emotions, her aunt’s, the Duchesses, Garret’s and his brother’s so powerfully, I felt I was a shadow in the room, seeing and experiencing it all for myself.

The brotherhood of Knights continues to fascinate me.  Their love for each other and their willingness to support one another, touches the heart. Again, Le Veque, thoroughly encapsulates these feelings in this wonderfully written story of love.

Many scenes are sweet, full of trust and innocence, others will grip your gut, terrorized by the possible outcome.  This is a story of love at first sight, of innocence and purity of spirit, and an answer to this question. What holds more value to a man?  Will love or honor dictate the path a man must follow?

I am a lover of books, both reading and writing. 2018 marks the beginning of my own journey from writer to published author. This blog will showcase various authors' thoughts on the elements of novel crafting, and my attempts to find my voice in writing. While journaling this journey, I hope to encourage others to follow their dreams. Book reviews continue as I have the last four years, only making time for my new pursuits.
View all posts by eileendandashi →
This entry was posted in Book Reviews, Historical Romance, Medieval Romance, New Book Release, Uncategorized and tagged Historical Medieval Romance, Kathryn Le Veque, Shield of Kronos, The Great Knights of de Moray. Bookmark the permalink.

1 Response to Review: SHIELD OF KRONOS by Kathryn Le Veque ~ a story of love and honor — can one take precedence over the other?