Posted on September 11, 2017 by eileendandashi 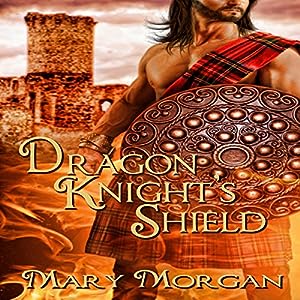 Publisher’s Summary:
Angus MacKay, leader of the Dragon Knights, failed his brothers and his clan upon the death of his sister. Now he must fight the darkness of despair tempting his soul. Back on Scottish soil, he comes face to face with Deirdre who can wield a sword as mightily as his warriors, and he takes her captive. Yet, with each passing day, the fire dragon inside him roars to claim the one woman fate has destined for him.

Famed mystery writer Deirdre Flanagan is unprepared for the next chapter in her life. On a vacation to Scotland, she steps through the mists and enters into a skirmish alongside a Highlander. However, the fight has only begun, and now she must battle Angus as well as evil in order to claim the love of this Dragon Knight.
Will their love be powerful enough to shield them from danger, or burn them to ashes?
©2016 Mary Morgan (P)2017 Mary Morgan

My Thoughts:
Ms. Morgan’s writing sizzles from the first page, sharing Angus MacKay’s desparate plight sliding into the abyss of self-loathing.  He hated what he had become and certainly couldn’t ask forgiveness from his brothers, even if they were still alive. Were they? His heart yearned for his home, Urquhart, yet he could not return.  He was to blame for it all, the elder brother who should have been able to control all the forces.  He hadn’t taught his brothers well enough and then the battle ended in his sister’s death.  It was too harsh to even think about.

Each of the books in the series has been about the retrieval of relics taken from these great knights by the Fae.  Their names were stricken from the hallowed halls of the Fae.  Each knight had a quest to redeem themselves whether they understood they must do it nor not.  The three other brothers had redeemed themselves and were safely back home in Urquhart with their partner, chosen by the Fae. However, to fight the evil force growing in their world, all four brothers had to be redeemed, and Angus was not among them.  Where Angus was the one most hard on himself, he was also the most stubborn.  His stubbornness almost cost them everything and he, personally, to learn the meaning of love.

The Fae have chosen to move the relics to the future.  A woman, for each relic, had been chosen from the future, one the Fae deemed special in her own right. For the Fae, even though hard-nosed, loved the Dragon Knights descended from the ancient order.

Deidre had been chosen to protect the shield and bring it to the past.  But if you asked her, she’d have nothing to do with it.  She was a damn good writer, publishing and getting noticed.  She was also a woman who had been dumped on her wedding day – her husband-to-be, paid a prank, dared by his sorority buds.  Now, ten years later, at 30, she no longer was the fragile young woman she’d been.  She had made something of herself including being extremely clever with knives.  Susan, the heroine of her mystery/detective novels had to know how to protect herself.  So what better way to get it right than to learn it for herself?

Her friends decided to surprise her with a birthday gift – a trip to Scotland.  Strange happenings assailed her once in Scotland. She was drawn to certain things, and eventually she was pulled into the past. Deidre was the type of person who didn’t wait for someone to do something for her.  When there was trouble, she stepped in and took care of it.  Afterall, she could take care of herself.  But not realizing what year she stepped into, made her vulnerable and unsettled.

Narrator Paul Woodson enhances the pleasure of this story with his Scottish brogue, and American accented women.  For your enjoyment and sampling of how Woodson narrates, I asked him to provide a clip for me.

I love the world Morgan created, thoroughly thrilled with its narration, reliving it in vibrant living color. The scenes of tragedy or pain are very nicely depicted by Woodson, wonderfully shown the reader by Morgan.  The heroine is my kind of feisty, determined woman who believes in Angus. Angus is a warrior knight who finally redeems himself and gains the love of a woman warrior in her own right.

Once again, Ms. Morgan has filled my senses with where she took me.  The verdant landscape, rugged mountains, a man with unusual abilities and a kind heart, filthy vermin of men seeking power, the balance of life as they knew it, so close to disaster, Fae who are hard not to like, even when manipulating people’s lives and finally the valor of men with women whom they love.  It can’t get much better than this.

Reader, if you love fantasy, mixed with time travel, Fae, Dragons, knights to make your knees weak, and magic, never hesitate to begin this series.  My appreciation to Mary Morgan’s talent is unending.

Morgan interviews with Booktalk with Eileen in the next couple of weeks.  Please pop on back to hear what she has to say.

I am a lover of books, both reading and writing. 2018 marks the beginning of my own journey from writer to published author. This blog will showcase various authors' thoughts on the elements of novel crafting, and my attempts to find my voice in writing. While journaling this journey, I hope to encourage others to follow their dreams. Book reviews continue as I have the last four years, only making time for my new pursuits.
View all posts by eileendandashi →
This entry was posted in Audiobook, Audiobook Review, Fantasy Romance, Romantic Comedy and tagged Audiobook Review, Dragon Knight's Shield, Fantasy, historical romance, Mary Morgan, Scottish Highlands. Bookmark the permalink.

2 Responses to Audiobook Review: DRAGON KNIGHT’S SHIELD by Mary Morgan ~ I enjoyed Morgan’s story more, the second time around! What a captivating series!