Posted on September 9, 2017 by eileendandashi 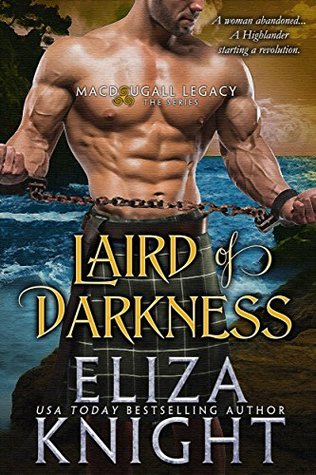 A woman abandoned, a Highlander starting a revolution.

When Lady Rosamond de Warenne is abandoned by her father in a remote cave, she doesn’t believe her fate could get any worse—until she’s kidnapped by a fearsome Highlander. Laird Tierney MacDougall, recently released from imprisonment by the English, is bent on revenge, starting with marrying the daughter of his tormentor. A union forged from vengeance is doomed to fail—or is it?

My Thoughts:  Who could possibly punish his daughter for disgracing his name by leaving her in a cave with few supplies?

Lady Rosamond knew her father, John de Warenne, to be unstable.  She had been the strong one, the twin who protected the other.  In this situation, she is doing the same.  Her twin, Loretta, had been secreted away to a convent.  She is enceinte.  If her condition were discovered she would be severely punished by her father and her reputation destroyed.  Rosamond preferred to receive said punishment. If word got around about the de Warenne twins, she would own up, it was her, not her sister.

But she had no idea the punishment meted out would be so extreme.  There was no way down from the cave.  She had nothing with her to coil or climb over the side of the cave and down into the water. She was forced to consider death if her father didn’t come back for her. She was determined to find some way out of this pickle.  Her miracle came in the form of Tierney MacDougall.

Tierney MacDougall, now laird of his clan, had just been released from the Tower of London, after excruciating torture.  He never gave up hope while there.  With a promise he’d be loyal to the English king, as his own father had been, he is released to return home and be laird of the MacDougall clan. He is eager to get back to Scotland and his castle, Dunstaffnage.  Would his men still be loyal to him?  Perhaps, they think he took sides with the English king.

Both Rosamund and Tierney are heroes in their souls—both are noble.  They also have a grudge against John de Warenne.  Tierney would very much like his head, but he must tread carefully.  Their problems and challenges come from John de Warenne, not their attraction to each other.  Each are attracted to the strength of the other.  Rosamund quickly comes to love the man who saves her life, not once, but many times.

If you enjoy plenty of action, with a bit of magic, and honorable love which surmounts evil in a Scottish setting, you are sure to enjoy Eliza Knight’s The MacDougall Legacy series.

I am a lover of books, both reading and writing. 2018 marks the beginning of my own journey from writer to published author. This blog will showcase various authors' thoughts on the elements of novel crafting, and my attempts to find my voice in writing. While journaling this journey, I hope to encourage others to follow their dreams. Book reviews continue as I have the last four years, only making time for my new pursuits.
View all posts by eileendandashi →
This entry was posted in Highland Romance, Highland Stories, Historical Romance, Romance and tagged Eliza Knight, Highland Romance, historical romance, Laird of Darkness. Bookmark the permalink.

1 Response to Review: LARID OF DARKNESS by Eliza Knight