Posted on September 6, 2017 by eileendandashi 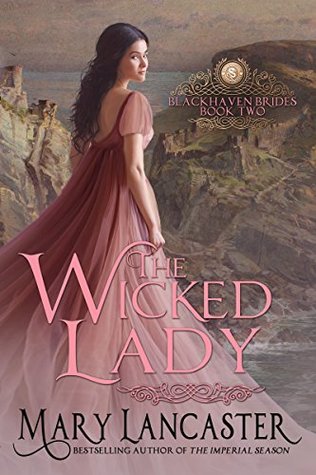 Newly widowed, wicked Kate Crowmore is in trouble. Scandal has broken over her head and someone is trying to kill her. When she seeks refuge in Blackhaven, she doesn’t expect a clergyman to be the solution to both these problems!

Tristram Grant is not just any clergyman. The cast-off, illegitimate son of an earl, and a one-time army officer of great promise, the charismatic new curate is making his mark in Blackhaven. As soon as he sees the beautiful, defiant Kate, he sets his heart on her. And he is used to achieving his goals. But Kate, finally free of a disastrous marriage that almost broke her, has no intention of marrying anyone ever again – supposing she survives the attempts on her life.

Grant’s courtship, like his pursuit of her enemies, is unorthodox, fun and curiously seductive. However, he has secrets of his own and when he deliberately frees a French prisoner of war, Kate realizes he could be more dangerous than she imagined.She

Then, as if life isn’t complicated enough, her old scandal catches us with her again, in the shape of Lord Vernon, whom the world imagines is her lover – and he wants to marry her too.…

My Thoughts: This is an amusing story about a woman who uses her reputation to keep men at bay and protect her heart. Lady Crowmore has perfected the perfect set down.  But underneath it all?  She’s kind, and sensitive. She learns people can look beyond the terrible humors she killed her husband.

Tristram Grant is the town’s new curate of St. Andrew’s Church in Blackhaven.  He doesn’t fit the mold at all (gorgeously handsome, with impeccable manners), but that, being said, the town loves him. Yes, even when he gets involved it what seemingly looks like helping a French prisoner escape and when he associates with a widow of questionable character.

Grant makes several friends within the town.  Dr. Lampton believes in him even when appearances don’t look very good for his reputation.

Grant isn’t looking for a wife, but is drawn immediately to the beautiful widow who doesn’t dress in widow’s mourning dress. More tongues go a-wagging when Grant introduces himself to Lady Crowmore and asks her to dance.

The bantering between the two is not only enjoyable for them, but the reader, too. In this small excerpt he introduces himself to the widow at a ball, something not appropriate as you Regency readers know. She shouldn’t even be there since she should be in mourning.

“Forgive me,” he said mildly. “I always seem to be in someone’s way.”

“The fault is trivial,” she replied, “but clearly mine. Excuse me.”

Her voice was enchanting, too—low, modulated, with just a hint of fashionable drawl. But since he was too uncivilly slow in moving aside, she began to walk around him.

“Perhaps you’d allow me to escort you to…wherever you’re going?” he suggested, turning belatedly aside.

Her lips curved into a sardonic smile. “To the devil, sir.” I could not ask it of you.”

“Precisely my subject of expertise, he said at once. “I might be your best protection.”

“Oh, I don’t need protection. The devil and I are old friends.”

Her step paused. She turned her head to face him once more, a hint of amusement in her deliberately distant gaze. She raised her perfectly arched eyebrow quizzically.

“Being a clergyman,: he explained.

A breath of surprised laughter fell from her lips. “Truly?”

She cocked her head to one side, consideringly. “Are you trying to save my soul, Master Curate?”

“Actually, I’m trying to dance with you, but if your soul is in need, I am at your disposal.”

Both hero and heroine will snag your heart.  Lady Crowmore is fighting her past and her deceased husband’s cousin. Grant is trying to retain his position as curate in the town.  Does his relationship with the only woman who holds his attention and interest ruin his status in the town? And what about the rumor he may be a spy?

Is Lady Crowmore convinced that someone could really love her for who she is?  Will the town get beyond the humors which threaten her future happiness?  Will Grant forgive her for her past transgressions which threaten their relationship? Can Grant convince her to marry him?  So many questions!

Author Lancaster will keep you entertained in this unique set of circumstances. Many challenges are met and overcome with a satisfying ending for two people who deserve it!  I enjoy the many books I’ve read from this author.  She has disappointed me yet.

I am a lover of books, both reading and writing. 2018 marks the beginning of my own journey from writer to published author. This blog will showcase various authors' thoughts on the elements of novel crafting, and my attempts to find my voice in writing. While journaling this journey, I hope to encourage others to follow their dreams. Book reviews continue as I have the last four years, only making time for my new pursuits.
View all posts by eileendandashi →
This entry was posted in Book Reviews, Historical Romance, New Book Release, Regency Romance and tagged historical romance, Mary Lancaster, The Wicked Lady. Bookmark the permalink.