Review: THE PRINCESS by Claire Delacroix ~ a fable of honor and true love 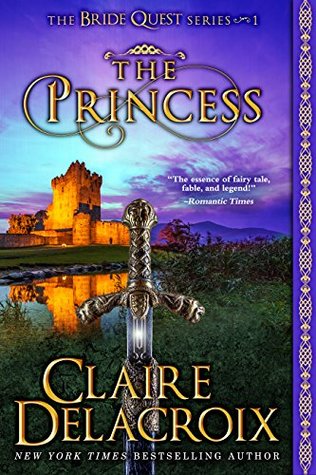 The Bride Quest series ecopy purchase link:
The Princess
The Damsel
The Heiress
The Countess
The Beauty
The Temptress

Publisher’s Summary: Princess Brianna of Tullymullagh is determined to marry only for love—until her father’s holding is conquered and the king decrees that she must wed one of the victor’s sons. Thinking she can outwit this condition, Brianna issues a challenge: the son who brings her a gift that makes her laugh will win her hand.

Thus begins the Bride Quest of the three brothers Fitzgavin.

Burke and Rowan, knights both, ride out on Brianna’s quest, each intent upon triumph. Only Luc refuses to participate, for he knows that a princess had no place in the life of a battle-weary warrior like himself. Brianna is not inclined to accept his refusal—she tempts him and awakens his slumbering senses with her alluring beauty and her sweet kisses. Luc has sworn to lay down his sword forever—until he is the sole one who can defend the fair maiden who has claimed his shielded heart.

My Thoughts: I’m so pleased to see this series written some 20 years ago, being re-released.  The jacket covers have all been revamped and are absolutely beautiful, depicting castles and swords.

The Princess starts a series about three brothers who find their true loves.  There is nothing like a fairy tale theme to get me smiling even before I begin the read.

Author Delacroix does not dampen my anticipation and enthusiasm with her beguiling speech pattern, mystery with surprising twists and a clever, beautiful, pure-of-heart heroine who wants only to marry for love. I am pulled emotionally and mentally into the keep of Tullymullagh. The life may be simple, but the danger can take your breath away.

Brianna, daughter to the King of Tullymullagh, does not want to be forced into a marriage.    King Henry II has taken the castle and surrounding lands, giving them to its new vassal, Gavin Fitzgerald.  Brianna is to marry his son. This does not fit with her plans, so she sends all three sons on a quest—to bring her something which will make her laugh. The one who makes her laugh the loudest and longest will have her hand.

Could she truly ensure there was no victor in this contest?  Aye! If Brianna set terms upon the resolution, the brothers would have to meet them. ‘Twould be just like a bard’s tale, the princess demanding that a trio of suitors compete to earn her favor.

The elder son, Luc Fiztgavin, does not want to participate.  He just wants to return to his home in Wales. But his sire’s request and one of his own make it neigh impossible to not come. It was time to obtain Llanvelyn’s seal from his father, a promise his sire promised to fulfill.

On principle alone, Luc was prepared to dislike everything about Tullymullagh, no less its spoiled princess. But the first sight of Tullymullagh’s high square tower awakened an unexpected admiration with Luc.

When the other sons are off on their quest, Luc stays behind and spends his time working on the orchard which has been poorly cared for. He loves working the land, a love he gained in his childhood when he lived with Pyrs, a man who saw the caliber of person Luc is. Unbeknownst to him, the orchard had been near and dear to Brianna’s mother.

Brianna is curious about this man who wouldn’t fight to win her hand.  Curiosity and Luc’s teasing nature, keep Brianna coming back to the orchard.  What is it about him which draws her?

From Luc, he doesn’t want a princess, but his eye and reaction to her, he can’t control.

Brianna was the perfect, tiny fairy queen of Pyrs’ bedtime tales. Luc had never imagine that such beauty could exist outside of fanciful stories and was clutched with a desire so primal that it curled his toes.

When he first looked at her:

Then she glanced at Luc. A jolt ripped through him as their eyes met. Her full lips parted ever so slightly and Luc had the distinct sense that they were the only two in the hall.

Gavin, the father, is a bit of a pill. It is difficult to read him.  He is a bully, even with his sons.  He enjoys demeaning people for it raises his own prestige, or so he thinks.  However, he is a man who learns a very big lesson with a huge price.

We get to know more about who Luc is.  He’s a man of honor, a man of his word.  This is very important to him.  He no longer carries a sword, laid down some 10 years ago. He has strong reasons to have done so.

Evil walks within the castle. People die. Luc wants to protect Brianna, for death walks closest to her.

The characters all play important roles, providing a rich field for lies, intrigue, and false leads. Father Padraig is very much the moralist for the people. When a mishap happens, it is because of the sin of the person. I enjoyed not liking him.

Ruarke de Rossier is the knight who is supposed to protect the keep. He has questionable morals, and a ready smile for Brianna. He doesn’t entirely ring true.  Luc doesn’t like him overly much, but when Gavin beats him and he’s defenseless, he stops the beating, stands before his sire, ready to be beaten himself.

I thoroughly enjoy Brother Thomas, a jovial monk with a big belly he very much likes to fill.  He adds both humor and past knowledge which Luc needs to ferret out the killer.

I am a lover of books, both reading and writing. 2018 marks the beginning of my own journey from writer to published author. This blog will showcase various authors' thoughts on the elements of novel crafting, and my attempts to find my voice in writing. While journaling this journey, I hope to encourage others to follow their dreams. Book reviews continue as I have the last four years, only making time for my new pursuits.
View all posts by eileendandashi →
This entry was posted in Historical Romance, Medieval Romance, Mystery, Re-release, Romance and tagged Book Review, Claire Delacroix, The Bride Quest Series, The Princess. Bookmark the permalink.

6 Responses to Review: THE PRINCESS by Claire Delacroix ~ a fable of honor and true love