Released today: TRAITOR IN MY ARMS by Shana Galen ~ experience the Reign of Terror through Lady Gabrielle and Lord Sedgwick’s peril 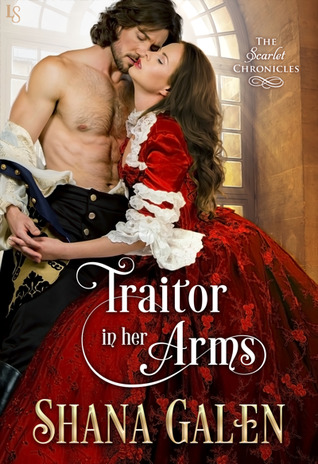 Two morally compromised souls wage a battle of wits—and seduction—against the backdrop of the French Revolution in this thrilling romance from bestselling author Shana Galen.

After her late husband leaves her in debt to some dangerous people, Lady Gabrielle McCullough is forced to become a thief. In the intervening years, her skills have not gone unnoticed. After being recruited by the Scarlet Pimpernel, the mysterious do-gooder spiriting aristocrats out of revolutionary France, Gabrielle crosses the Channel for the most daring mission of her life. Accompanying her is the Earl of Sedgwick, a thief in his own right and an enticingly masculine presence. The man is not to be trusted—nor is Gabrielle’s body when he’s near.

Ramsey Barnes would not say he is an honorable man. His whole life has been based on a lie; why change now? Although it pains him to deceive the tantalizing Gabrielle, he’s working toward an altogether different objective: unmasking the Scarlet Pimpernel. If Ramsey fails, his blackmailer will ruin him. But when Ramsey’s confronted with the carnage of the Reign of Terror, he seeks refuge in Gabrielle’s heated embrace. Now he faces a terrible choice: betray the woman who’s stolen his heart—or risk losing everything.

My Thoughts:  Even though I’d read only one of Galen’s books, Sapphires are an Earl’s Best Friend, I knew I was in for a treat.

I know a book has been successful in teaching me something when I highlight certain terms and later look them up.  Author Shana Galen has done her homework about the Reign of Terror.  She paints an accurate and bleak picture of the life of its nobility, or perhaps better said, the destruction of it.

The guillotine was a despicable killing machine.  In Paris alone, it is estimated between 2,600 to 3,000 people were beheaded by Madame Guillotine.  An estimate of 17,000 people throughout France were beheaded, or as the people would say, so-and-so ‘sneezed into the basket’ or ‘poking through the window’.  These terms are used in the story and they are historically accurate.

Scarlet Pimpernell is very much part of this story.  I’m not sure he actually existed, but there is a novel written by Baroness Orczy, published in 1905 who speaks of an Englishman who rescues aristocrats from Madame Guillotine. Perhaps, he is legend. But in this story, he’s real.

I was transported to the fear and terror of that time.  I could smell the people and filth of the streets, catacombs and sewers. I could feel the hatred of the common people for the gentry who represented the reason they had almost nothing.

With this backdrop, Lady Gabrielle McCullough, an English woman is also living in a situation she needs to escape. Her dead husband left her in debt and the creditors are demanding their due.  She takes up thieving and is rather good at it.  When she thinks she’s obtained a highly valued piece of jewelry, it is stolen from her by the only man who has had her heart flutter, Earl of Sedgwick.

The situation is quite comical even though it’s dangerous. Sedgwick is also a rather accomplished thief. It appears he has troubles of his own.  He’s being blackmailed and needs the item to keep his secret, secret.

Sedgwick has always liked Gabrielle.  In his own way, Sedgwick is honorable. I really enjoy this character.  He’s honorable, yet is driven to do dishonorable things. In that direction, he accompanies Gabrielle to France.  She’s there to save two aristocrats, a duke’s wife and daughter, a request by the duke and Scarlet Pimpernel himself. She must acquire a precious and most difficult-to-procure jewel for a warden in the prison, who then has promised to release the woman and child.  But has she jumped from the frying pan in England into the fire in France?

In such a climate the streets were not safe.  Gabrielle is relieved to have Sedgwick along.  He has told her he isn’t trust worthy.  So at what point does she find he may be trusted? This trip to France has not only changed the hero and heroine, it has given me a true insight into this catastrophic time in history.

I loved how the story began—with a scene we eventually get to with the telling of the tale.  Galen repeated the scene.  With the acquired backstory, the scene is now fully emotional and dreadful for me, making me amazingly sympathic.  Excellent writing.

I liked the extremes of the story.  Side-by-side, I experienced the evil of man, done out of revenge, the good of man to help people from certain death, the greed of man to better himself, and the selflessness of others.

Needless, to say, I love the way the events and environment were portrayed through Gabrielle and Ramsey’s journey.  They were flawed, Ramsey more so than Gabrielle, yet noble in their actions.  Can Gabrielle forgive Ramsey’s duplicity?

Galen keeps the story running at a fast clip. I was totally engaged with it all.  The overall arc of the story is spot-on.  I could not be more pleased with this read.

I am a lover of books, both reading and writing. 2018 marks the beginning of my own journey from writer to published author. This blog will showcase various authors' thoughts on the elements of novel crafting, and my attempts to find my voice in writing. While journaling this journey, I hope to encourage others to follow their dreams. Book reviews continue as I have the last four years, only making time for my new pursuits.
View all posts by eileendandashi →
This entry was posted in Book Reviews, Historical Fiction, Historical Romance, New Book Release, Regency Romance, Romance and tagged Book Review, historical romance, Shana Galen, Traitor in Her Arms. Bookmark the permalink.

3 Responses to Released today: TRAITOR IN MY ARMS by Shana Galen ~ experience the Reign of Terror through Lady Gabrielle and Lord Sedgwick’s peril