Early Review: BODY SHOT by Amy Jarecki ~ Do you like your reads gut and emotionally gripping? Here’s a story of facing challenges with honed mind and body. I loved the thrill! 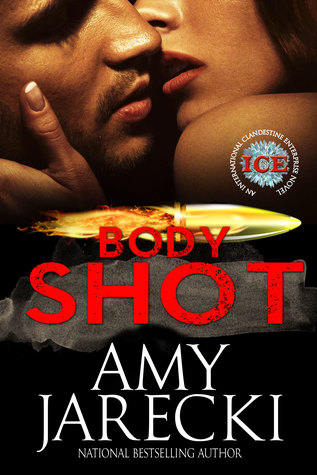 Publisher’s Summary:
She has every right to feel venomous resentment…

Convicted of a murder she didn’t commit, sniper Henri Anderson suffers two years of hard time before she’s given a choice—accept an unknown assignment offered by a seedy foreign dignitary or head for home. The decision took all of two seconds. At least that’s what she thinks, until a mysterious Scottish man shows up and offers a deal sweet enough to tempt a saint.

But has the rugged blue-eyed closer met his match?

Annoyed that ICE is wasting his time by sending him to Utah to recruit a talented soldier who has already turned them down, secret agent, Mike Rose, has no intention of failing. He’s a tough guy with more persuasion in his hard stare than most people manage with an oration. Disarmed by a woman who’s not only tenacious, she’s downright stunning, Mike tempts Henri with something even a hardened Delta Force sniper can’t refuse. And once she’s hooked, Mike thinks he’s done—can go back to covert ops working alone. But Henri isn’t a woman who’s easy to forget. And when she’s snared by the clutches of the very man who framed her for murder, the big Scot will sell his soul to save her.

My Thoughts: Heart-pounding action with a woman who knows who she is and what she wants, author Jarecki gives me another opportunity to live on the edge, and in this particular story, this should be taken literally.  Jarecki is one of those authors you know will entertain you, senses and emotions 100% engaged.  I didn’t read book one of this series, but made not a whit of difference to this story.

Henrietta has worked for Delta Force. Her bullet killed Fadl’s brother. It wasn’t as if he didn’t deserve it. He’d had a grenade, ready to pull the pin which would have killed Henri’s entire squadron. Somehow, she was fingered by his brother, Omar Fadli and put behind bars for two years.  She’s been wrongly accused and spitting mad with so-called justice.

She’s set free, offered another career by the very man handing her the release papers, saying they know who got her in prison.  Henri isn’t up to trusting anymore. She walks from the prison, turning down this trickster, who’s ready to set her up again.  No, never again.  She has little faith for the good guys, that is, if they are good. She prefers to walk out of prison and lose herself in her grandfather’s mine, on the Paiute reservation. A place to heal, lick her wounds and renew her spirit.

And I don’t need to be a hero. Been there, done that and was paid in misery. I am to flipping the Army the bird and moving on.

This new outfit who’d offer the job let her cool her heels for a couple of months and then sent out a handsome Scot, named Mike Rose, to see if she was ready to reconsider.  Apparently, by her reaction she wasn’t.

She let him approach until she was sure he’d be able to see the muzzle of her rifle peeking between the sagebrush. “I could shoot you for trespassing,” she said, using her badass sergeant voice.”

The man took off his sunglasses and grinned. Good Lord, maybe not all the redheads on the planet were pasty. True, he had fair skin, but he looked buff—healthy, even. “Henrietta Anderson,” he said in a deep brogue, waving as if they were old pals. “’Tis good to see you’ve lived up to your reputation.” Jesus, he rolled his “rs”.

There is attraction and apparently from both sides.  But Henri is anything but obstinate, yet Mike is her match as you see through the story. He talks her into seeing how the new team, ICE, of which he is a member could help her seek revenge.  She soon realizes that’s just what she wants, to stick it to Omar Fadli.

Henri joins ICE, training hard with the other team members.  She comes to respect them. Mike and Henri are thrown together in a mission that is frightfully believable and scary as hell.

I’m eager to continue the series with Jarecki, a writer who knows how to create thrilling, mind-blowing situations with characters you’ll love.  Secretly? I wish I could have the stamina, smarts, passion and drive to reach my goals as they do.  Oh, and Henri?  Well, she’s just dynamite.  Hope we’ll see her in the sequels. Henri, you go girl!

I am a lover of books, both reading and writing. 2018 marks the beginning of my own journey from writer to published author. This blog will showcase various authors' thoughts on the elements of novel crafting, and my attempts to find my voice in writing. While journaling this journey, I hope to encourage others to follow their dreams. Book reviews continue as I have the last four years, only making time for my new pursuits.
View all posts by eileendandashi →
This entry was posted in Book Reviews, New Book Release, Romantic Suspense, Suspense, Thriller and tagged Amy Jarecki, Body Shot, Book Review, ICE Series. Bookmark the permalink.

2 Responses to Early Review: BODY SHOT by Amy Jarecki ~ Do you like your reads gut and emotionally gripping? Here’s a story of facing challenges with honed mind and body. I loved the thrill!