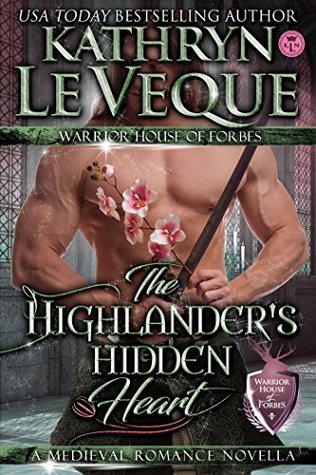 As a child, Jackston Forbes made a promise to lovely – and pushy – Lizelle Menzies.

A man of his word, Jackston never forgot that promise. Through the years of experience and growth, Jackston has become a powerful warrior, now returning to his home in the highlands to assume his place as his father’s heir. But along the way he meets a young woman who will test the strength of his vow to marry Lizelle, and when he discovers the brutal and petty woman Lizelle has become, it becomes a difficult choice for him – will he remain true to a childhood vow or will he follow his heart?

(Note: Originally published in The Forbidden Highlands collection 4/2017, this is an extended version never before published.)

My Thoughts:  I didn’t have the chance to read this novella in The Forbidden Highlands. Nevertheless, it’s a novella, and I’m not partial to shortened versions of a story.  I enjoy the deep characterization and subplots found in Le Veque’s longer stories.

Okay, that being said, I, nevertheless, found the story enjoyable.  I suspect everyone has a hidden heart. What’s yours?

A boy of 12 cannot know his mind.  Nor can he make decisions which will dictate the rest of his life.

Yet, Jackston is being railroaded into marrying a girl he knew as a young lass.  He agreed to marry her once he comes of age.  No contract is written, yet only the word of a young boy. Lizelle was spoiled as a youngster, her father bowing to her every whim.  When young she is a spoiled girl, as adult she is equally spoiled, with a mean streak.

When Jackston comes back from battle, as a knight, he must face Lizelle and her family.  When he tries to let them know how he feels about honoring a youth’s commitment, he doesn’t have the chance.  Both Lizelle’s father and Lizelle work to make it impossible for him to make his wishes as an adult known.

Jackston feels honor is so important.  He’s a knight.  His actions are reflected upon his family. Can he dishonor his family by denouncing he was but just a lad and shouldn’t be held accountable for such a big decision?

Do I marry Lizelle as I once promised to do? Or do I forsake me parents’ honor and run?

Feeling corralled he goes to the stable to sort things out.  He meets Rora, a servant to Lizelle. He remembers her from the day he gave his commitment to Lizelle, so many years ago.  She’s beautiful inside and out.  He’d rather marry her.  However, can he dishonor his family with a marriage to woman of low birth? He doesn’t want her as a mistress.  He respects her too much. These are real conflicts.

The quandary eats at Jackston.  But circumstances work to his favor.  He stands for honor, after all.

The Highland’s Hidden Heart is nicely written with a uniquely Le Veque feel. Again, as mentioned earlier, characterization and subplots are impossible in such a short story. However, the story, with its strong message, leaves the reader feeling fate takes care of good people and happy-ever-afters still happen.

I am a lover of books, both reading and writing. 2018 marks the beginning of my own journey from writer to published author. This blog will showcase various authors' thoughts on the elements of novel crafting, and my attempts to find my voice in writing. While journaling this journey, I hope to encourage others to follow their dreams. Book reviews continue as I have the last four years, only making time for my new pursuits.
View all posts by eileendandashi →
This entry was posted in Book Giveaway, Highland Romance, Highland Stories, Historical Romance, New Book Release, Novella and tagged Historical Medieval Romance, Kathryn Le Veque, Scottish romance, The Highlander's Hidden Heart. Bookmark the permalink.

4 Responses to Review: THE HIGHLANDER’S HIDDEN HEART by Kathryn Le Veque ~ a novella