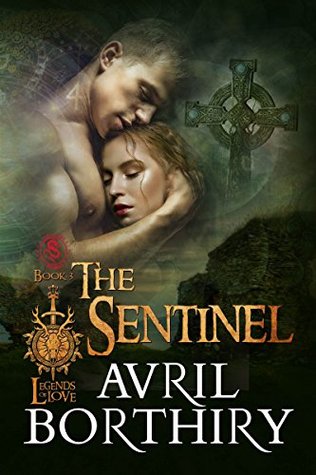 Publisher provided a copy in exchange for a fair and honest review.

Publisher’s Summary:
Haunted by the memories of a tragic betrayal, Turi has been forced to endure a torturous existence. He is a mercenary warrior, his soul tainted by the sinful distractions of a reclusive life. When at last the promise of redemption beckons, Turi returns to the land of his birth, eager to find the peace that has eluded him for so long.

Cristen St. Clair is a fugitive. Alone and defenseless, she is easy prey for men who would do her harm – until an enigmatic warrior comes to her aid. It is a fated meeting. Turi and Cristen each have something to offer – and they each have something to hide. But before their shocking secrets are even brought to light, they are faced with another daunting challenge. The Black Death has already decimated the lands across the narrow sea. It is merciless. Deadly.

And it has just arrived on England’s southern shores

My Thoughts:
Author Avril Borthiry does a marvelous job in creating a very worthwhile and entertaining series.  Each book is a stand-alone story and I’ve enjoyed each thoroughly with their touch of magic.

The Sentinel sweeps the reader into the story setting with Welsh mythological terminology. We learn of Turi’s infraction, why he is punished by Pendaran, Head Priest of Ellan Vannin, and what he should expect from the punishment in the year AD 48.  The tale picks up again in AD 1348, the purported time The Black Death comes to England, and the time Turi is to revert to being mortal.

In Sentinel, Borthiry’s writing style fits perfectly with the hardship, anguish and horror of the times, her descriptions show the reader no mercy. With the ever-present danger, either through pestilence or wicked men, the gods and magic help Cristen and Turi find their happy ever after.

Borthiry delves into a most devastating time on the continent and England.  The pestilence, also known as the blue sickness and The Black Death is a fear a person can’t escape, no matter how mighty they are as warriors or pure of heart.  Yes, they can run, but can they hide? It marches across the land, finds its new home on the shores of England, spread by flea bites and person to person transmission.

Cristen St. Clair escapes from the accidental death of her husband, fearing the reciprocation of his brother, who’s had his eye on Cristen throughout her marriage, and is looking for a reason to pursue the woman.  He’s the devil himself.  But with Cristen’s fleeing, she’s put herself in serious danger. Anything can happen to a woman alone on the road.  She travels to an abbey seeking a man who may know the whereabouts of her young son who was taken from her in a fit of anger by her husband to parts unknown.  She has lots of problems, but her determination is very commendable.  Will her strength of character, and will be enough?

Turi has been living for a very long time, 13 centuries, his punishment for believing the words of a woman who betrayed their village.  For those who died, his penance and punishment is immortality for 13 centuries, plagued with guilt and wrong doing as if it just happened, even suffering nightly nightmares.

Turi was sired by Pendaran, the Head Priest of Ellan Vannin.  He is the last survivor of the Setantii tribe, conceived with a human woman. Turi punishment is almost over. Turi has lived a life he is not proud of and soon judgement will be at hand.

From the moment Turi lays eyes on Cristen in the tavern, he feels she will be important to him.  When she leaves the tavern and another man follows her, he quickly disengages himself from the tavern wench and follows her. His instincts are correct, honed by centuries of reading people and battle.

Cristen and Turi are destined to meet, possibly orchestrated by the gods. Turi finds he needs her probably more than she needs him, becoming very protective.  Her very touch silences the demons who haunt him every waking hour.  Each hold secrets and with their blossoming trust, all is revealed.  But can Cristen accept such an unbelievable, fantastic tale Turi tells?

If you are a reader of fantasy and romance, set in a medieval historical setting, Borthiry’s Legends of Love series will captivate and delight your senses.

I am a lover of books, both reading and writing. 2018 marks the beginning of my own journey from writer to published author. This blog will showcase various authors' thoughts on the elements of novel crafting, and my attempts to find my voice in writing. While journaling this journey, I hope to encourage others to follow their dreams. Book reviews continue as I have the last four years, only making time for my new pursuits.
View all posts by eileendandashi →
This entry was posted in Fantasy Romance, Medieval Romance, New Book Release and tagged Avril Borthiry, Book Review, Legends of Love Series, The Sentinel. Bookmark the permalink.

2 Responses to Review: THE SENTINEL, a historical Medieval romance