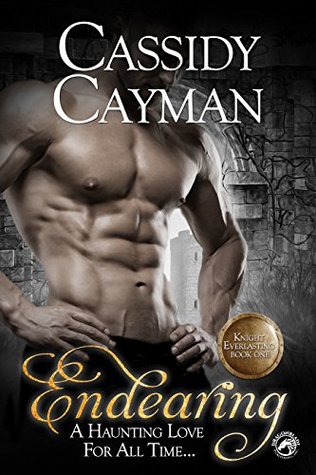 Except Fay Driscoll is very much alive. Just not in her own time anymore. After trying on a cursed medieval gown in the crumbling ruins of Grancourt Castle, she’s whisked back to the Middle Ages with no chance of ever returning. The only way she can save herself and those around her in her new time is to prove love exists.

Fay is determined to give it her all, especially when a sizzling hot knight shows up at the gates of her new home. She figures she’ll have the curse broken in no time. Until her knight in shining armor turns out to be a monstrous jerk. She can’t waste her time on rude knights, no matter how gorgeous they are. It can’t be a marriage of convenience. It has to be more than pure, unadulterated lust.

For Fay, falling in love is a matter of life or death. If only she can stop thinking about Sir Tristan’s muscled chest and sky blue eyes long enough to remember that.

Sir Tristan Ballard has recently inherited a keep and its lands. He is determined to keep it, no matter the cost. It’s suggested he marry one of his new liege lord’s daughters to forge a stronger alliance against those who wish to try and take what’s his. He’s not interested in getting married at all. Especially not to the youngest daughter of Grancourt Castle. He’s fairly certain the strange girl is touched in the head. He absolutely wants no part of her. And yet… he can’t seem to keep his mind or his hands off her.

My Thoughts: This is the first time I’ve read author Cassidy Cayman’s work.  This particular series already has me engaged with its unusual plot, time travel, mystery, and Medieval setting.  Even though it ends on a cliffhanger, I was smiling as I reached the end. But with the smile and last couple of paragraphs, Cayman hooks me for book 2. The series, I understand, is a three-book one.

Fay Drisdoll, is thrown back in time while helping her Uncle Randolph with a fashion show of medieval clothing at Grancourt Castle, a castle which has partially been restored.  If she hadn’t had to model the six hundred-year-old wedding dress, she wouldn’t have suffered the curse which goes with it.

She is flung back in time only to find she isn’t the only one who has time travelled.  Each girl who puts the wedding dress on suffers the same fate and each try to break the curse. Fay finds herself in a chamber, awakening at a desk with a piece of vellum under her folded arms and head.

True love and faithfulness are but a lie.

Prove me wrong, you must now try.

Fail, return the gown in which I was betrayed,

And in your grave you will for certain lay.

She takes from this poem she must find her true love.  If she cannot, she’ll die.  This bit of news and the whole setup is overwhelming to her. Additionally, notes other girls leave with the poem are disturbing, don’t make much sense.  This is the mysterious part of the story.

According to the curse itself, if she put the gown back in its chest, that would mean she’d failed. “And in the grave for certain lay,” she repeated the last line of the poem. “Nope, won’t be doing that.”

She’s relieved when she meets her family for the first time.

So it was true. They knew her name. And they didn’t seem concerned that she must look different from the last person. And she was certain people spoke the Queen’s English quite a bit differently now than they did in her time. And yet she understood them perfectly well.

She looks at everything with fresh, excited eyes, making remarks that make her sound addlebrained. Fay learns Medieval life by fire.  While her cushy life in the castle with her family hasn’t entirely prepared her for all the raw unwashed masses of people she meets, she is starting to enjoy her new life.  She learns the fear of the times, possibly dying from infection, childbirth, consumption and something as simple as diarrhea.

Fay doesn’t know how much time she has, to find her true love, but she’s ready to try. She’s a girl with a heart of gold.  She finds she’s attracted to two men and they to her.  Sir Tristan Ballard is the owner of a recent inherited property, Dernier Keep. The other is a Lord Drayton with many holdings and wealth, and handsome enough.  Fay can’t afford to make a mistake in her choice.  She needs true love not amazing chemistry.

Cayman’s characters, well fleshed-out drew me into the story.  From Marjorie, maid servant to Fay’s sister Anne, always talkin gloom and doom, to romantic Batty who’s a great friend and maid to Fay and also has her eye on Tristan’s squire, Brom. The characters I got very attached to, as did Fay, were her older sister, Anne, a wise, kind soul and Tristan, a man of honesty and a pure heart. He’s also a man who can’t believe his luck with Fay’s forward advances!

This story will have you crying, no doubt.  It’s also has its silly moments.  One such one is when Brom, Tristan’s squire tells of what he heard about Fay.  He said she reads a lot.  This is particularly bad for women because it’s harmful to their lady humors.  This comment plays a great role in Tristan’s understanding of how odd Fay seems at times.

The publisher provided an advanced reading copy in exchange for a fair and honest review.

I am a lover of books, both reading and writing. 2018 marks the beginning of my own journey from writer to published author. This blog will showcase various authors' thoughts on the elements of novel crafting, and my attempts to find my voice in writing. While journaling this journey, I hope to encourage others to follow their dreams. Book reviews continue as I have the last four years, only making time for my new pursuits.
View all posts by eileendandashi →
This entry was posted in Book Reviews, Historical Romance, Medieval Romance, Mystery, New Book Release, Romance, Time Travel and tagged Book Review, Cassidy Cayman, Endearing, Knight Everlasting Series. Bookmark the permalink.