Just released: THE WICKED BARON by Mary Lancaster ~ be prepared to laugh your way through this one! 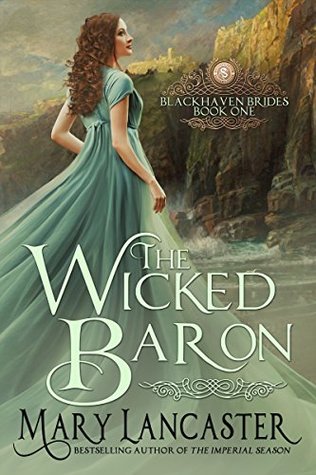 The Wicked Baron is the first in the Blackhaven Brides series, set in a newly fashionable spa town on the beautiful Cumbrian coast, where the great and the bad of visiting Regency society turn local life upside down.

Orphan Gillie Muir makes ends meet by holding genteel card parties for friends and visitors to the newly fashionable spa town of Blackhaven. But when Lord Wickenden, known as the Wicked Baron, makes her a shocking proposal, her world is turned upside down.

Jaded and bored, Lord Wickenden has his own reasons for joining the house party at Braithwaite Castle. One of them is to oblige an ex-mistress by detaching her son from the local gaming den hussy who has ensnared him. But, confronted by Gillie’s unexpected charm and innocence, Wickenden abandons his original plan of simply taking her for himself.

Instead, he becomes embroiled in her bizarre problems, which include saving her reputation and her life, keeping the Watch away from her card parties, and hiding an injured smuggler who was once kind to her.

The infuriating and devastating Wickenden soon has Gillie’s heart in a spin. But when she discovers he means to fight a duel over her – and everyone knows the wicked baron never misses – she’ll go to any length to save his life and his soul. Even elope with another man.

My Thoughts: I hope you enjoy this light-hearted Regency as much as I did.  At times, the chaos around me felt so real and funnily ludicrous.  Author Mary Lancaster writes scenes with a deft hand and sense of humor, fast-pacing dialogue snapping off the page in scenes not contrived even with all its hilarious action. More than once I thought you have got to be kidding and found myself laughing!

As with most Regency house parties, this is the place so much can happen.  The house party at Braithwaite Castle is located in a relatively new spa town close to Scotland, the town of Blackhaven. Those who are looking for some quiet time from London would attend one of these parties.  In fact, the reason Lord Wickenden came he knew not.  He was already bored with his life in London.

He certainly wasn’t prepared to get involved with a young innocent who broke rules, simply because she didn’t know they were rules to be followed.

Gillie Muir, (her real name is Gillyflower Muir!) has her hands full with the comings and goings at her home. She tends a card party every Friday for the locals, mostly friends she’s known all her life and friends of her recently deceased father.  Her staff and old aunt thought it most improper to do this, but she and her brother have to live, so they could keep the house they live in.  Their father left them penniless. The attendees would donate something for the time spent at her parties.  Not only the camaraderie of those attendees lure the folk, but the best of brandy flows freely, grace to the local smugglers, conveniently brought into the house through a tunnel leading to their cellar.

One Friday night, a smuggler had been shot by the magistrate. The magistrate has tried to curtail smuggling for some time.  Not knowing what else to do with the man, the other smugglers haul him into her cellar, along with the brandy.  Stuck with a body, she knew not would live, she requested the good Doctor Morton, who happened to be at her card party, to attend to the man.

Lord Wickenden had decided to join his friend, Earl of Braithwaite, at the party.  Not knowing the sort of establishment it is, he assumes it is a place where the enjoyment of the fairer sex could be had.  When he spies Gillie, he is intrigued.  He notices all the fluttering around, in and out of the party room, so decides to follow Gillie and investigate–his curiosity peaked.

The manner in which he sets himself upon Gillie, excites her.  Does he actually think her alluring, a country girl?  A man of the London set? After thoroughly being kissed, shortly after meeting him at the card party, he breaks the spell.

Her mouth yielded helplessly, letting him explore and plunder. Her free hand clutched at his coat for support and, without really knowing how, she was returning his kiss…

“Take me to your chamber.”

Gillie blinked at him, uncertain that she’d heard him properly. “I beg your pardon?”

“Your bedchamber. I want you very badly.”

By then, they stood so close together that she finally understood the hardness pressing against her stomach. With a gasp of outrage, she tore herself free.

“How dare you? Do you take me for a—a…” She struggled to find the word. “…a camp follower?”

“Not exactly He sounded more amused than contrite. “I understood you were free, but if you’re not interested, just say so.”

For some reason, her eyes stung. I wasn’t so much the insult to her honor. It was…hurt, because she’d liked him. She’d actually believed he liked her. She’d naively, stupidly, mistaken his sordid interest for romance.

Gillie does what any good, decent girl would do, she kicks him out of the party.  When her brother finds out who she kicked out, he bemoans their plight.  He, as a titled gentleman, could ruin them.

Gillie has other problems.  Someone is watching her. Is she safe from these men? Someone else is trying to take her house away from her.  No one would be bored around this gal.  The internal dialogue she has with herself speaks well the person she is.

Lancaster has created some interesting characters, one of them Aunt Margaret, hard of hearing, but a dear old thing. She answers a question posed by Gillie.

“Why are men such idiots?  Gillie demanded.

I suppose they are born that way, Aunt Margaret said comfortably.

Kit Grantham wishes to rescue Gillie from ruining her reputation by opening her home to men and still in mourning for her father, by offering for her. His mother has come to town and offers to pay her off!

As Lord Wickenden gets pulled further into Gillie’s world, he realizes something.

But God help him, it was more than lust. He wanted to protect her, laugh with her, walk with her…Sensing the ultimate danger in such thoughts, he veered away, mentally and physically.

But he can’t stay away!

I say musical chairs, my fair readers, come to mind in this deliciously comical story, the beginning of a series sure to tickle your funnybone.

I am a lover of books, both reading and writing. 2018 marks the beginning of my own journey from writer to published author. This blog will showcase various authors' thoughts on the elements of novel crafting, and my attempts to find my voice in writing. While journaling this journey, I hope to encourage others to follow their dreams. Book reviews continue as I have the last four years, only making time for my new pursuits.
View all posts by eileendandashi →
This entry was posted in Historical Romance, New Book Release, Regency Romance, Romance and tagged Blackhaven Brides, historical romance, Mary Lancaster, The Wicked Baron. Bookmark the permalink.