Releases tomorrow: Mary Morgan’s book 1 in her new series, Legend of the Fenian Warriors — QUEST OF A WARRIOR

“Conn drew the breath from her lungs and then gave it back to her mingled with his own.”  ~ Quest of a Warrior 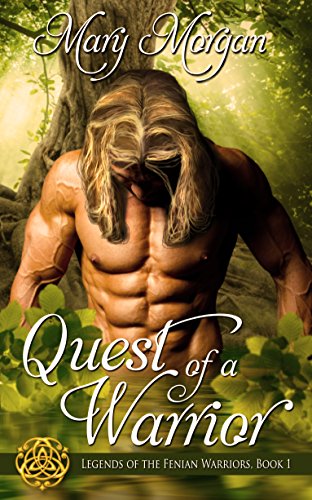 My Thoughts:  Are you ever there?  When a book is so good, you can’t put it down – all the things you should be doing are justified to not do?  I was so there, afraid to finish the book, never wanting to step out of this fantasy, because it was awesome and afraid not to finish the book so I could know what happens in this world of magic, love, and understanding.  I wanted to proloooong the whole experience!!  Through many a tear, on and off, through cheers of support for the good in humans and Fae, through meeting ‘old’ friends and getting to know new ones, through defeating evil, it is simply a wonderful experience!

Did I say I love this author? I love the mystical past mixed with the present allowing us to believe magic is still among us!

In a few pages, with her description, Morgan takes me to a place of such serenity, I’m tearful.  Then she’ll squeeze my heart with tragedy, with impossible odds, with love so divine, so pure, so giving, I’m again tearful.  She writes stories which ricochet deep into my being, leaving me spent and eventually sated.

This story is about the first of the Fenian Warrior to be punished, Conn MacRoich, an ancient having lived many lifetimes of battle and saving those needing saving. The start of this series has opened the door to loads and loads of stories ready to be told. Yeah, now can I continue living in this wonderful land of Warriors, Knights and even the last remaining Dragon, still protected by the remaining Dragon Knights. Morgan has me doing a happy dance. I now know there will be more Dragon Knights in a contemporary setting, more powerful than those who came before, men who are part Fae.

Ivy Kathleen travels to Ireland to take possession of an inheritance from an uncle she didn’t know existed.  It’s an exciting time of her life, a new beginning of sorts.  She finds the little town of Glennamore already knows her through pictures and stories her mother had shared with her uncle, Thomas O’Callaghan.  Why share with a man never spoken of in her home?  A mystery to solve.  Her uncle was killed while crossing the street by a hit and run driver.  Was it an accident?

All Ivy Kathleen’s life she’s had visions of sort, visions of the past.  She’s learned to block them out.  Her mother had told her it was a gift.  Her father didn’t like Ivy, didn’t like the idea she had these visions.  Why?  A mystery to solve.

I liked the idea this is a new series, but pulls in characters from the last series, Order of the Dragon Knights, seeing them struggle with the consequences of their deeds.  Conn is a special Fenian warrior.  He is the son of the King and Queen of the Fae.  To be a warrior, he had given up his status as prince, but finds he’s some major decisions in his life.  He accepts his punishment, trying to un-weave that which he wrought in error, centuries ago.

Conn’s punishment sends him on a quest — to right the wrong, to bring the ancestor of the wronged into the light.  Ivy Kathleen, newly traveled from San Diego, to Ireland meets him in the bar in Glennamore, across from the bookstore she also inherited.  He is drawn to her, she to him.  He struggles with emotions, those he didn’t have as a Warrior. Can he bring her into the light and remain distant?

Authors note discusses how this story is based on one of its legends of the Tuatha de Danann of Celtic mythology.

Lastly, I enjoyed how the story ended.  It wasn’t just a happy ever after and then abruptly ends.  Morgan weaves further plots into the ending, providing a sneak-peak without those teasers, which frankly, frustrate me.  This ending leaves me wanting for what is to come, because apparently all is not well.  The job is not finished.  The new Dragon Knights and the Fae will continue the challenge to keep each other’s worlds intact.

Eager to join her world?  You can get the first complete five-book set by clicking on the image here:

I am a lover of books, both reading and writing. 2018 marks the beginning of my own journey from writer to published author. This blog will showcase various authors' thoughts on the elements of novel crafting, and my attempts to find my voice in writing. While journaling this journey, I hope to encourage others to follow their dreams. Book reviews continue as I have the last four years, only making time for my new pursuits.
View all posts by eileendandashi →
This entry was posted in Action/Adventure, Book Reviews, Fantasy, Fantasy Romance, New Book Release, Romance, Romantic Suspense and tagged Book Review, Fantasy Romance, Legends of the Fenian Warriors, Mary Morgan, Quest of a Warrior. Bookmark the permalink.

7 Responses to Releases tomorrow: Mary Morgan’s book 1 in her new series, Legend of the Fenian Warriors — QUEST OF A WARRIOR