Release day for Alexa Aston: JOURNEY TO HONOR, book 4 of Knights of Honor 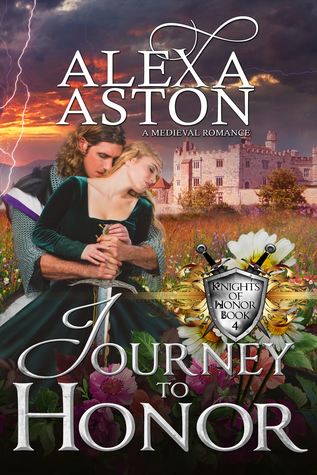 Knights of Honor Series:
Word of Honor
Marked by Honor
Code of Honor
Journey to Honor

1366 A.D. – Kenric Fairfax is raised as the second son of the Earl of Shadowfaire. The day of his Knighting Ceremony, a tragedy takes place—and Kenric flees the north of England, putting his past behind him as he swears he will never marry. He becomes a trusted knight in service to Lord Michael Devereux, who asks Kenric to lead an escort party from London in order to bring his wife’s sister home to Sandbourne.

Avelyn Le Cler has spent a year as a lady-in-waiting to Queen Philippa and finds the treachery at the royal court not to her liking. She looks forward to a summer visit with her sister Elysande, who will soon give birth to her first child. While journeying from London, Avelyn discovers a secret about Sir Kenric Fairfax that could change his life—if he believes her.

But Avelyn is plagued with doubts since she has no proof to present Kenric. As the couple falls in love, Avelyn knows she must reveal to Kenric the truth she has learned about his birth—even if it costs her everything.

Join Kenric and Avelyn as the truth rips them apart—but their enduring love brings them together again.

My Thoughts:  I was eager to read this story, the fourth of the series.  I had read the other three previously and found them all worthwhile reads. I’ve got to say the cover on this read is simply over the top. So much is there, shadowing the depth of the story, itself.  This one is a thumbs up review.

For those readers who enjoy the antagonist of the female gender, this one will suit.

The story setting exposes the difficulty in giving birth during the Medieval times.  Many women died as did many newborns.  Husbands seeking only male heirs could be cruel, if they were of a bad nature without love to their spouse.

In this particular story, Walter Fairfax, Earl of Shadowfaire, had waited long for an heir.  Julianna, his wife had lost three babes in the four years they’d been married. The earl abused his wife to add insult to injury.  But finally, she bore a babe.  More than one, there were two.  Twins.  They weren’t identical.  One looked like their father, the other like their mother.

Gussalen, midwife, friend and servant to Julianna, assisted in the birth.  Since there were two, she decided to switch their births.  The one who looked like Julianna, she said was the first to leave the womb.  However, the other who looked like its father was actually first. Julianna didn’t know anything about the birthing switch.

Two boys grew up together.  Kendric, favored by his father, was given all the necessary skills to make him a great knight or possibly an earl, if his brother, who was sickly, died.

Roland, the second twin, sickly, almost dying several times, grew up to be cruel like his father.  Kendric, had an inborn justice temperament.  He often took the blame for his brother’s mischievousness.  He humbly accepted it.  He also knew his mother didn’t love him, and really had no love from his father, so he felt much alone.  This brings to mind, looks aren’t what makes a man, rather his character.

Kendric makes his way into the world, fosters with Lord Forwin, a baron, who also knights him.  But the day he receives his spurs, Lord Forwin’s daughter, Lady Jannet, a terribly spoiled woman who hasn’t heard the word ‘no’ in her life, demands Kendric marry her.  When he kindly tells her he wishes not to marry, rather focus on being a good knight, she does the absolutely unthinkable and changes Kendric’s life forever.

I won’t spoil this pivotal moment for you.  Suffice it to say, it is riveting and anguishing.  [learn to say no to your kids!]

Avelyn Le Cler is at court, coming from a country life.  She finds she really doesn’t like it much, but Queen Philippa has been good to her.  No friends to speak of, except Sela Runford.  Sela Runford is young like Avelyn, pursuing friendship with Avelyn when she comes to court.  Several people have urged Avelyn to avoid Sela, but she likes her.

Avelyn is on her way to visit her sister, countess of Sandbourne, while the queen is in summer progress.  She is accompanied by her cousin and Sela.  Kendric is tasked to accompany and protect Avelyn.  Kendric’s liege is Avenlyn’s brother -in-law, Lord Michael of Sandbourne.

So the scene has been set. Avelyn has spirit, doesn’t back down when confronting Kendric.  They both have to share the same horse on their way to her sister’s. Soon they see the good in each other.  Kendric keeps his family ties to himself, Avelyn is eager to learn more, but doesn’t pry. There is definitely an attraction developing.

Things get sticky when Sela wants Kendric for himself.  The understanding between Kendric and Avelyn is deep, until events change Kendric’s life.  The love this couple has is an on and off again roller coaster ride, hurtling them both into despair, pulling the reader with them.  I question, is too much truth not a good thing after all?

Most definitely, I’ve enjoyed the whole series with its memorable characters, along with its delicious and suspenseful moments.

I am a lover of books, both reading and writing. 2018 marks the beginning of my own journey from writer to published author. This blog will showcase various authors' thoughts on the elements of novel crafting, and my attempts to find my voice in writing. While journaling this journey, I hope to encourage others to follow their dreams. Book reviews continue as I have the last four years, only making time for my new pursuits.
View all posts by eileendandashi →
This entry was posted in Book Reviews, Medieval Romance, New Book Release and tagged Alexa Aston, Book Review, Historical Medieval Romance, Knights of Honor Series. Bookmark the permalink.

1 Response to Release day for Alexa Aston: JOURNEY TO HONOR, book 4 of Knights of Honor