Recently Released: THE DEVIL IS FRENCH by Delilah Marvelle, book two of the series of the Whipping Society ~ not a book for the weak-hearted!

A woman had to start living lest she start dying.

Learn to be soft when it matters most, but never always. Always isn’t going to protect you. Spoken by Mr. Ridley

Who cares if you offend the world? The world doesn’t care if it offends you.” Spoken by Mr. Ridley

A cross didn’t stop people from spitting. They simply nudged it out of the way.

There was a reason Eve darted out of Eden. It got boring. Thought by Jemdanee

My duality is hero and demon. Your duality is Indian and white. Spoken by Mr. Ridley to Jemdanee Lillian Watkins

Unlike most men, I enjoy discourse as much as I do intercourse. Spoken by Mr. Ridley 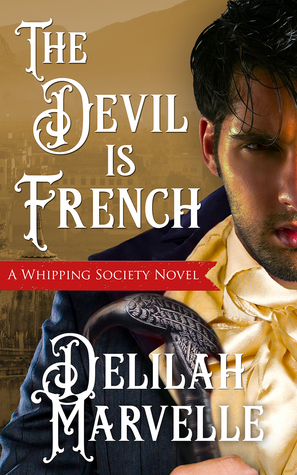 HE’S ALL BONES AND SHE’S ALL SUNSHINE.
Meet Mr. Ridley.

LONDON, ENGLAND – 1830
Criminals fear the iron fist of justice he delivers. Scotland Yard will do anything to get their hands on his mind. Whilst women? They crawl in the hope of becoming his. But only one woman is about to hold his career and his body and his mind hostage.
​
Jemdanee (Kumar) Lillian Watkins is a botanical savant from India who ends up getting arrested for a crime she didn’t commit. Only one man believes her: Mr. Ridley. Drawn to him and the rope he knots in her presence, she quickly realizes this overly regimented, sexy dark hero hides nothing but his passion.
​
Themes include wit, humor, mystery, history and romance. Lots of it!

My Thoughts:  When reading book two, it is important to remember this story isn’t resolved until the completion of book three.  Which means, the characters haven’t completed their metamorphosis. That being said, I find both very stubborn and become frustrated with their perspectives, yet see the point of view each are coming from. Each have a huge chasm to seal to be a compatible couple, even though each know they love each other most strongly.

I have so many conflicting feelings as I am entangled with the turn of events.  And yes, much like the first book, it is riveting, now, with its morbid aspect exposing the darker side of Mr. Ridley, for he is even more macabre than in book one.  His close-to-death experience has harden him, strengthened him.  He’s had to become a different man to become the man who can fight his addiction and obtain what he desires — Jemdanee.

Mr. Ridley makes me nervous. One never knows how he’ll react to a situation. He’s a hard character to like, yet I see glimpses of the man he could become, if he is willing.  With all the love Jemdanee has for the man, she doesn’t trust him.  Yes, she loves him, but can’t trust him. She is determined to save him. from himself. At times, I’m through with the man.  Then, he will do something so tender, I cannot give up on him entirely.  He is terribly complex, willing to experience pain and heartache rather than have another do the same thing. And in this, he hurts Jemdanee over and over, as well as himself.

Now, three years later, he is stronger, crueller, more protective of Jemdanee.  Yet he puts Jemdanee on edge as she has trouble understanding the new Mr. Ridley.  He is a genius and with his work in London as inspector, people hold him in awe.  He would take an atrocity, find the criminals who committed the act and put them behind prison walls more easily than any other.

Mr. Ridley is caught up in the dark side of sexual experience.  He enjoys pain and wants to bring Jemdanee into his world.  She’s such an innocent, although she has a passionate nature. How can this chasm be bridged?

Jemdanee left Mr Ridley in the first book of this series.  She has spent three years in India, cooped up in a place with so many rules, she no longer feels freedom.  During this interim, Mr. Ridley, took himself in hand, kicked the laudamen addiction, living his life within strict confines.  He thought never to walk again, and on the verge of death, when Jemdanee left him.  Now he’s in India to reconnect with Jemdanee. The man is beyond strong, in mind and determination.

Mr. Ridley has a suspicious nature, one that Jemdanee feels exhausted dealing with.  If she were one minute late to a rendez-vous, he tells her.  If she doesn’t react and do as he wants her to do, he feels she doesn’t respect him, or love him enough, where he reminds her how much he has done for her, getting himself put together, so he could have her.  He is forever controlling.  He says he would never try to change her, but he says she doesn’t respect who he is. Could you live this with guy? Is he worth changing for? Is he completely sane?

Book two is full of angst, complications and outside forces which hero and heroine are dealing with, only creating a bigger divide between the two.

All this said, reader, I cannot put the series down. It’s a page-turner of pain.  It sometimes disgusts, sometimes frustrates, sometimes shines a glimmer of light and hope, but then once again dashed.  I MUST read book three!

I am a lover of books, both reading and writing. 2018 marks the beginning of my own journey from writer to published author. This blog will showcase various authors' thoughts on the elements of novel crafting, and my attempts to find my voice in writing. While journaling this journey, I hope to encourage others to follow their dreams. Book reviews continue as I have the last four years, only making time for my new pursuits.
View all posts by eileendandashi →
This entry was posted in Book Reviews, Dark Romance, Historical Romance, Victorian Romance and tagged Dark Romance, Delilah Marvelle, historical romance, The Devil is French, The Whipping Society Series. Bookmark the permalink.

2 Responses to Recently Released: THE DEVIL IS FRENCH by Delilah Marvelle, book two of the series of the Whipping Society ~ not a book for the weak-hearted!