Review: ECHO IN THE WIND by Regan Walker 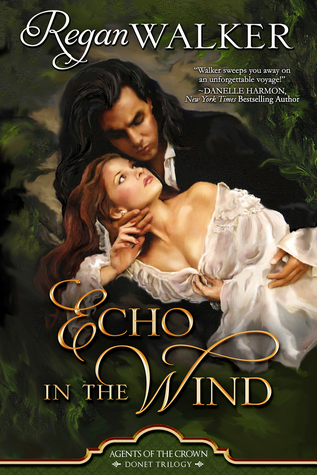 England and France 1784
Cast out by his noble father for marrying the woman he loved, Jean Donet took to the sea, becoming a smuggler, delivering French brandy and tea to the south coast of England. When his young wife died, he nearly lost his sanity. In time, he became a pirate and then a privateer, vowing to never again risk his heart.

As Donet’s wealth grew, so grew his fame as a daring ship’s captain, the terror of the English Channel in the American War. When his father and older brother die in a carriage accident in France, Jean becomes the Comte de Saintonge, a title he never wanted. Lady Joanna West cares little for London Society, which considers her its darling. Marriage in the ton is either dull or disastrous. She wants no part of it.

To help the poor in Sussex, she joins in their smuggling. Now she is the master of the beach, risking her reputation and her life. One night off the coast of Bognor, Joanna encounters the menacing captain of a smuggling ship, never realizing he is the mysterious Comte de Saintonge. Can Donet resist the English vixen who entices him as no other woman? Will Lady Joanna risk all for an uncertain chance at love in the arms of the dashing Jean Donet?

My Thoughts:  Lady Joanna meets a handsome sea captain, who is well respected among the peerage, but who also lives a double life, like Joanna.  Unbeknownst to her, he is none other than the captain who owns the French brig who delivers the goods that Joanna’s small village smuggling crew receive.

Jean Donet, having been his own master for years, owning three ships and three homes, is drawn to help the downtrodden.  He’s had dreams, forced to give up.  His love of music and picking up the violin calms his spirit.  When life closes door, he pursues another.

The sea is Jean’s life, now.  He’s more comfortable on sea than land. He is a man of many facets, with a spirit of adventure and more handsome than anyone should be allowed to be. He is a comte and  smuggler. He also never wants to love again, for then he would be vulnerable.

Lady Joanna West, a charming and proper woman of English Society, sister to Earl of Torrington, is a woman with a conscious and a spirit which enjoys living on the edge.  The English Society is a bore to her as well as the men who have approached her for marriage.

“The Harrows is more than adequate for me. Besides, I consider marriage a dull affair punctuated by moments of misery. I would avoid it, perhaps forever.”

Not only does she see the poverty around her in Chichester, she, with her decided manner to help those less fortunate, helps the smugglers in her village so prices for tea and brandy can be purchased by the poor and less fortunate.  By smuggling tea and brandy, she is well-beloved by the village folk.  Her younger brother Freddie is included in her adventures.  The elder, Richard, would be outraged to hear what is going on right under his nose.

When did Jean start to have feelings for Joanna? He recognizes the ‘lad’ who leads the group of smugglers to be the charming sister of the earl.  He is intrigued with a woman who need not smuggle, but doing just that, puts her life in danger, for if she were caught, she would be punished by hanging.

He finds she has him feel feelings he thought never to have again.  He had loved his dead wife Ariane more than he thought possible.  There couldn’t be another. He could not love and lose again. Yet, he is drawn to Joanna.  He feels the need to protect her, yet fights his attraction to her.

All is well with the smuggling operations, until the coast guards spy the transfer of goods from the French ship, la Reine Noire.  And where is the fine lady?  She’s on the French ship which needs to make a hasty retreat so not to be caught.

In the heat of a sea battle where Joanna is on deck of la Reine Noire, the unthinkable happens.

He turned to be certain his passenger had gone below. To his horror, just short of the aft hatch, the bos’n stood looking down at Lady Joanna lying unconscious on the deck. Her hat had come off, leaving her beautiful auburn hair splayed out around her. Dark red blood seeped from her belly and flowed to the wooden planks.

“Seigneur Dieu!” he cried and rushed to her, crouching down to sweep her into his arms. He shouted to Emile, “The ship is yours. Make for Lorient!”

Jean’s strength makes Joanna feel safe, protected. Events put her in a compromised position.  She is drawn to him like a bee to pollen. Jean, with his French manner and suave bearing is more than she can resist.  But to what end?  Is that her end, a mistress to a Frenchman?

The author brings us closer to the captain, showing us by events what type of person he is.  I enjoyed the spattering of French throughout the book, Jean’s determination to not love, the ship cat Benjamin Franklin, Jean’s close friendship with the quartermaster, and above all the heroine who reaches beyond what society demands of her to find what she needs to be fulfilled.

I am a lover of books, both reading and writing. 2018 marks the beginning of my own journey from writer to published author. This blog will showcase various authors' thoughts on the elements of novel crafting, and my attempts to find my voice in writing. While journaling this journey, I hope to encourage others to follow their dreams. Book reviews continue as I have the last four years, only making time for my new pursuits.
View all posts by eileendandashi →
This entry was posted in Book Reviews, Georgian Historical Romance, Historical Romance, New Book Release, Regency Romance, Romance and tagged Book Review, Donet Trilogy, Echo in the Wind, historical romance, Regan Walker. Bookmark the permalink.