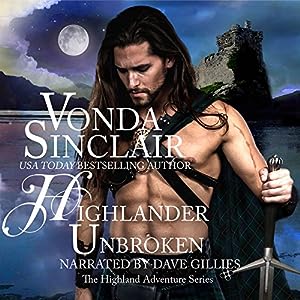 Torture has driven Neacal MacDonald to the brink of madness.

As the new chief of the MacDonald clan, Neacal will do whatever it takes to honor his late father and to help his clan thrive. But whispers of his madness abound and many in his clan turn traitor, wanting MacDonald of Sleat to lead them instead. Conflict ignites between the bitter rivals when Sleat garners the help of the man who tortured Neacal in the past.

Can one woman’s song pull him back and begin to heal his soul?

Everything has been ripped from Anna Douglas except her angelic voice and the will to survive. When she meets Neacal MacDonald, she recognizes something familiar in him…stark loneliness and pain. His past could be even more tragic and tarnished than hers. No one must learn her true identity or about the brutish man declaring she is his wife, for he will stop at nothing to reclaim her. Though Neacal vowed to never trust a woman again, he cannot resist the secrets in Anna’s eyes or her spellbinding song, which threatens to break down the icy walls surrounding his tormented heart.

My Thoughts:  Neacal McDonald never wanted to be chief, laird to his clan.  He knew he was damaged goods having been severely tortured for a crime he didn’t commit.  How can he lead the clan when he could hardly control the rage still living within him?

Anna Douglas joined a traveling musical group, using her exquisite voice to put food in her belly. She had been on the run for two years, escaping a life which terrified her. The band of musicians found the McDonald clan a place where they were appreciated and had been entertaining for some time.

Neacal found solace in Anna’s lovely voice; it somehow reached into his very soul, giving him a very unsettled feeling, but somehow soothing and calming. His emotions are uncontrollable, ragged-edged, ever since a woman had deceived him.  Can he ever trust a woman again?

Anna is just plain skittish.  When you learn of her past, you will see she is a woman of strength and good heart.  With all that has befallen her, she is still able to see the good of life, the good in people.  In Neacal she sees a good man, one she admires, one she could fall in love with, but her past still haunts her, preventing her to move forward. Perhaps it’s time for her to leave this clan.

As Neacal takes command of his clan, there are people who talk he is mad, not a good leader, etc.  Spies are among his people.  Who are his enemies, who can he trust? Talk unsettles his clan, but there are those who still have faith in him.

The character Sleet is a most interesting and devilish character.  He’s sleazy, sowing lies with his forked tongue.  Beware the worm within your circles, dear read. He/she can do the most harm!

I loved the listen.  The nerve-wracking plot kept me gasping with each turn of event. Truly! It is amazing what the human spirit can overcome.  Author Vonda Sinclair propels us into such a story, compelling and enthralling with scene after scene of palpable terror, each scene coiling angst ever higher.

Narrator Dave Gillies, one of my favorite narrators, makes the story personal, with intimate tone where appropriate. His superb technique of eliciting tension through his tone and vocal pacing, perfectly matches the intent of the author. I’ve read or listened to most of this series.  I’ve missed of few of them and will rectify my error.  A superb series from a talented writer who takes me to Scotland to meet the cruel, the honorable, the compassionate, and above all experience the power of love. Every. Single. Time.

Series and author highly recommended for those who crave adventure and seek justice in a historical setting.

I am a lover of books, both reading and writing. 2018 marks the beginning of my own journey from writer to published author. This blog will showcase various authors' thoughts on the elements of novel crafting, and my attempts to find my voice in writing. While journaling this journey, I hope to encourage others to follow their dreams. Book reviews continue as I have the last four years, only making time for my new pursuits.
View all posts by eileendandashi →
This entry was posted in Action/Adventure, Audiobook, Audiobook Review, Highland Romance, Highland Stories, Historical Romance, Romance, Suspense and tagged Audiobook Review, Dave Gillies, Highlander Unbroken, The Highland Adventure Series, Vonda Sinclair. Bookmark the permalink.