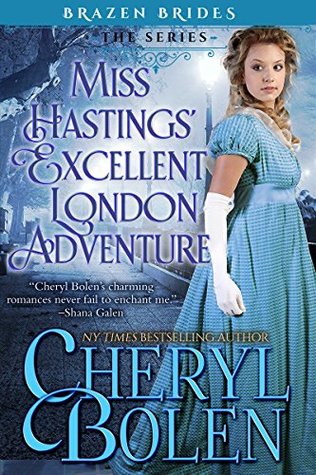 Publisher’s Summary: Having never left Upper Barrington in her twenty years, orphan Miss Emma Hastings is overjoyed when the uncle she’s never met invites her to come live with him in London. Everything about living in the Capital lures her. She doesn’t even mind sharing her seat in the mail coach with a gargantuan man whose belly rests on his lap. Even when her uncle fails to meet her at the posting inn in London, she’s too exhilarated over the city’s sights and sounds to be worried. After many hours pass and her uncle does not collect her, she determines to lug her trunk behind her as she struggles through London’s streets at night to find her uncle’s home.

Spurned by his mistress and vowing to never love again, Adam Birmingham, whose family is the richest in Britain, decides to get very drunk. As he’s staggering home, he takes pity on a very small young lady who’s lugging a very large trunk behind her. In the rain. Her destination is the home of his next-door neighbor, but no one answers the bell. Adam is compelled to ask the young woman to spend the night at his home. Promptly after showing her the chamber in which she’ll sleep, Adam passes out on her chaise. It’s not until the following morning he remembers that the lady’s uncle has died.

When Adam learns that Emma cannot return to Upper Barrington and that she has nowhere to go, he offers marriage to the hysterical lady. His heart is so shattered, he will never love again. Why not make this helpless orphan happy? Soon after they wed, they become convinced that someone has forged her uncle’s will–and likely murdered her uncle. Their resolve to bring the murderer to justice jeopardizes Emma’s life. Knowing she’s in danger brings out Adam’s protective instincts–and something far deeper, something he’d thought to never feel again. . .

My Thoughts: Two people, Miss Emma and Adam, are both spontaneous in nature.  Both are also compassionate, intelligent, and sensitive to another’s feelings.  Circumstances bring these two together with surprising results producing a read diverting in every aspect.  Author Cheryl Bolen’s plot pulls the reader into a Regency read with a bit of suspense, a bit of mystery involving two characters who fall into working together to solve a mystery, and gain much more.

Miss Emma Hastings had been brought up by her austere aunt in a small town of less than 100 residents, so when she had the chance to live with her uncle, she was ecstatic.  A young woman of 20, polished enough, with an innocent and trusting spirit, is put into a situation which could have ended worse than it did.

None of it was her fault.  Her Uncle Simon never came to the inn to collect his niece.  Waiting for hours did no good.  Her adventure in London starts when she leaves the inn, just on the border where the east and west end converge.  Lucky for her, the weather is terrible and few on the street.  She dare not stop until she comes into a better neighborhood.

Lucky for her, she meets a man who is so drunk he can hardly stand, but kind nevertheless.  He proceeds to help the young lady to her uncle’s.  But perhaps it was Miss Emma helping him walk the street.  Said man is Adam Birmingham, one of the wealthiest men in England, but at this time, one of the most unhappy.

Lucky for her he happens to be her uncle’s neighbor.

Some words of wisdom from her aunt:

“Never trust a man. All they’re interested in is their vile needs.”

“Once lost, a lady’s good reputation can never be regained.”

Adam is a man of excesses.  Excess in love, excess in misery, excess in protectiveness. He loves to madness a beautiful opera singer, Maria.  She dumped him and married a man of the peerage.  Adam isn’t of the peer—money aplenty, however.  It seems Maria needed a titled gentleman.

Emma is excessive in her hyperbole.  Either she’s excessively miserable or excessively happy.  Her exuberance in London makes Adam happy.  Her misery gives Adam an opportunity to try to make her happy and pulls out the protective streak in the man. Adam acts a little crazy when he offers to marry Emma in less than 24 hours after meeting her.  I sometimes get the impression Adam is a little shallow, but love begins changing him.  His attraction to Maria was due in part in his pride to be seen with her and have other men covet his place.

As Emma and Adam’s relationship grows, so does the depth of Adam’s feelings. Emma, once gowned and treated as a woman, becomes a lovely woman, one Adam is proud to escort.  Once he has that, he wishes he could have a friendship like his married brothers.  Once he has that, he wants the physical relationship which both Emma and Adam decided against before they married.  Emma, embroiled in danger, is a catalyst to Adam’s feelings.  His ideas of a convenience marriage change 180 degrees, producing our happily ever after and Emma is more than happy to fall in with his plans!

I am a lover of books, both reading and writing. 2018 marks the beginning of my own journey from writer to published author. This blog will showcase various authors' thoughts on the elements of novel crafting, and my attempts to find my voice in writing. While journaling this journey, I hope to encourage others to follow their dreams. Book reviews continue as I have the last four years, only making time for my new pursuits.
View all posts by eileendandashi →
This entry was posted in Book Reviews, Historical Romance, Regency Romance, Romance and tagged Book Review, Brazen Brides Series, Cheryl Bolen, Historical Regency Romance. Bookmark the permalink.