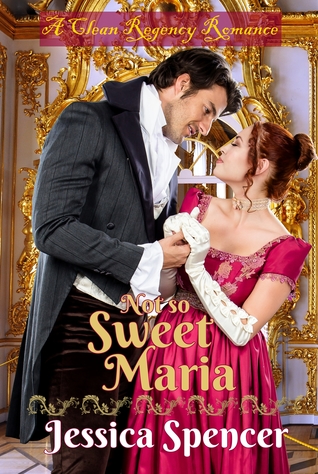 The ton calls her Sweet Maria and, even in her fourth Season, eligibles continue to offer her marriage.

They do not know Lady Maria despises the hypocritical ways of Polite Society and is trying to sail away to America!

Though the granddaughter of a duke, Lady Maria is a Child of Scandal because her mother was an American commoner.

She blames the duke and the duchess for her parents’ death. Had they not disowned them, they would not have died of a virulent fever in America, leaving her an orphan at the age of five.

She has not forgotten the coldness she had met with as a child, and how there were those who examined her features for tainted blood, and disparaged her mother to her face.

She agrees to an arranged match to ward off her persistent suitors, treating the engagement as a sham one to be ended at her convenience.

Then, most unexpectedly, she finds love with a commoner.

Only he isn’t a commoner but the Earl of Daventon.

Gareth, Earl of Daventon is no stranger to Scandal. Rumour has it that his father had banished his mother for adulterous behavior. He remembers his mother as a sweet, gentle woman and knows the late earl yearned until his last breath to have her back.

Love is a quagmire and I shall not be caught in it, he decides. But love finds him. The object of his ardour is a mysterious young woman who dresses like a shop girl and behaves like a lady.

Lord Daventon remedies the situation by accepting an arranged match, his betrothed being Lady Maria whom he hasn’t met.

All of which leads to a delightful tangle of affairs.

My Thoughts:  This is a story where Maria’s memories at age five and her perception of reality, cause heartache, not just for her, but her grandmother, a rather cold fish of a woman. She is the one to change the most in this delightful, sweet and hilariously funny situation.

Lovely Maria, once known as Mary, knows how to play the rules of politeness in the ton, With a quick-wit, and spirited, she finds a way to circumvent the rules.  She is quite talented in designing hats using the balance of geometry to set off even the most plain-known woman’s face.  Her plans are to make enough money to purchase her old homestead in Virginia, returning there, where she lived with her parents before they died.

She has opened a shop under her trusted old maid’s name, Gwen Matthews.  Very cleverly, she sits behind a one-way mirror, as women come in to purchase a hat.  She’ll design one specific for that woman’s coloring and shape of head. Her hats are selling extremely well, particularly since the sweet Maria, is seen about town sporting many of these bonnets.  Everyone wants to emulate her.

In the meantime, because of her sweet demeanor and perfect poise, she is accosted (strong word, but nevertheless true) many times a week to make a man the happiest of men – marriage, to be exact.  Her grandmother has decided for her, because Maria pays no mind to these men who are very appropriate for her.  She will marry the Earl of Daventon.  He hasn’t been one of those demanding her hand.  He decides to marry her sight unseen—after all, she is from a good family, with a good personality.  The idea of love doesn’t enter his head.  He treats it much like a business. He leaves it in the good hands of his aunt.

Maria’s reaction is rather bland, too, about the impending marriage.  Her plans are to escape back to America. She’s just trying to figure out how to break the engagement.  Her ideas of marriage change when she spies a man in the lawyer’s office just a couple of doors down from her shop. Earl of Daventon sees her, as well. (Yes, Lord Daventon!) They are both wearing clothes suitable for this part of the city, rather common in nature.  Maria always goes out dressed as a shop girl, wearing fringe for bangs, and scuffed shoes, etc.

When first they meet, Maria gives a false name and so does the Earl.  After all, he doesn’t want to scare the girl away.  It all gets rather funny, each keeping their real identity from the other.  Their hearts are soon given to each other, but both must follow convention and marry someone who doesn’t believe in love.

The story is light-hearted, yet feelings of indecision make the hero and heroine a bit miserable.  I found it a lark, since I knew what would happen.  If you enjoy a fun read, without your own emotional entanglement with plenty of levity, this clean Regency will surely do the trick.

The author provided an advanced copy to read in exchange for a fair review.

I am a lover of books, both reading and writing. 2018 marks the beginning of my own journey from writer to published author. This blog will showcase various authors' thoughts on the elements of novel crafting, and my attempts to find my voice in writing. While journaling this journey, I hope to encourage others to follow their dreams. Book reviews continue as I have the last four years, only making time for my new pursuits.
View all posts by eileendandashi →
This entry was posted in Book Reviews, Clean Read, Historical Romance, Young Adult and tagged Clean-Read Regency, historical romance, Jessica Spencer. Bookmark the permalink.