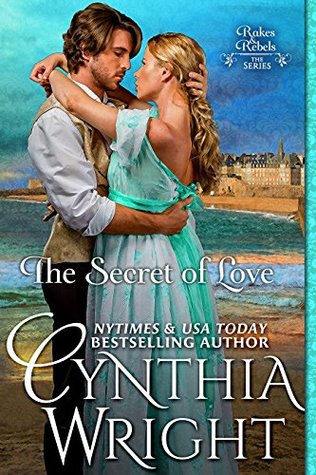 When Lady Isabella Trevarre first laid eyes on Gabriel St. Briac, she announced to her best friend: “That is the man I will marry!” Now a woman grown, Izzie has traded her girlish dreams for the independent life of an artist, but she never quite forgot the dazzling Frenchman who captivated her young heart. When he appears again in Cornwall, the seeds of desire grow between them.

As Napoleon’s army loots art treasures throughout Europe, Gabriel St. Briac’s priceless Leonardo da Vinci painting vanishes from its hiding place. Bent on recovering his family’s prized possession, Gabriel sets sail for the chaos of wartime France – only to find Izzie stowed away on his ship. Though fearful for her safety, he allows her to join in his quest. But Izzie harbors a dark secret…a secret that could shatter the tender blossom of their trust. When danger puts them both to the test, will these two guarded souls dare to risk all for love?

My Thoughts: This multi-layered story of laughable moments, suspenseful scenes, and engaging characters is part of a series you should not miss.

Isabella is a powerhouse young lady. Gabriel St. Briac is captivated and intrigue by her beauty and outrageous behavior.  She’s a free spirit much like he is.  They will bring you lots of smiles!

Lady Isabella Trevarre admires Gabriel St. Briac, a man she met when just a child.  She was a shy, young girl, slightly embarrassed about being plump.

Since gaining her independence from her family, she has grown into a woman of spirit, following a profession as an artist, as her mentor, Madame Le Brun, had achieved. Nor does she want marriage—it would prevent her from doing what she wants to do—paint. She has turned into a beautiful, curvaceous woman who Gabriel St. Briac can’t keep his eyes off.

Gabriel St. Briac is a man of adventure, smuggler, rake and a bastard child, but connected closely to the King.  His only proof of this relationship is a painting said to be painted by Leonardo Da Vinci.  Napoleon is seizing the treasures of Europe in his trek across Europe.  Rather than lose this precious painting, Gabriel leaves it in good keeping, or so he thinks!

It is discovered after four years of being hid away, the painting has been stolen.  Isabella, known as Izzy by her family, feels somewhat responsible since she surmises who stole the painting. With her rebellious and spirited self, she hides away on Gabriel St. Briac’s ship, to accompany him to France, to help to retrieve his painting. But hide where?  This is where you’ll be laughing!  She hid in a coffin in the hold of the ship. The coffin had been used for contraband tea on the sail to England. But her thoughts lead her to panicking, particularly when something heavy has been put on the coffin, keeping her from getting out if she wants.  Poor Izzie!

Sebastian, Issie’s brother, is married to Julia.  They have their story in Smuggler’s Moon, and play a role in this story, too.  Andre and Devon from Silver Storm are also participants in the story.  This story can be read as a stand-alone, but because I’ve read both book one and two, it enriched the backstory the author provides. Besides, it’s just good fun meeting characters you already know.

Narrator Tim Campbell moves from American accent to English and then to French accented English with flawless ease.  At the same time his inflection, tone and voice-pacing change in perfect synchrony in dialog.  His talent most definitely enhances the pleasure and entertainment of the story.

I am a lover of books, both reading and writing. 2018 marks the beginning of my own journey from writer to published author. This blog will showcase various authors' thoughts on the elements of novel crafting, and my attempts to find my voice in writing. While journaling this journey, I hope to encourage others to follow their dreams. Book reviews continue as I have the last four years, only making time for my new pursuits.
View all posts by eileendandashi →
This entry was posted in Audiobook, Audiobook Review, Book Reviews, Regency Romance, Romance and tagged 5-Star Review, Cynthia Wright, historical romance, Regency Romance, The Raveneau Series. Bookmark the permalink.