Soar the Skies with the Drakkon in EMBER by Paula Quinn ~ an amazing tale of power, control, greed, and untruths 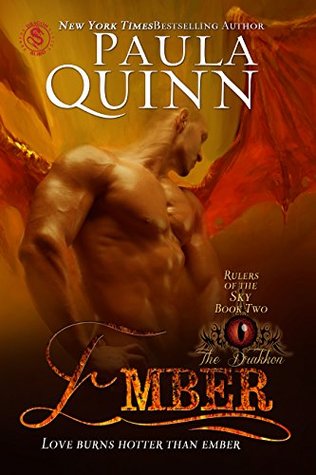 Publisher’s Summary: Millionaire Garion Gold is the last Drakkon alive on earth, but he doesn’t have to be. His blood holds the power to transform at will or alter any descendant of the ancients. He doesn’t have to live his life alone, hiding from those who seek his blood, secluded in a villa in the mountains of Norway. He can rule the sky with his kind, but the cost to humans is too high. So, he remains a man, alone in the clouds, giving up flight and fire for a nobler purpose. He’s suspended in both worlds, belonging to neither, an outcast with a price on his head that has cost others their lives.

Helen White will never forget the Gold Drakkon that burned her family to ashes and set her path toward a purpose. To find and kill him before he turns any more Drakkon. But he isn’t the monster she’d prepared herself for. He’s six feet five inches of pure, golden muscle and built like he could lift that hammer from the ground with a tug. He’s mystery and radiance draped in sunshine or starlight. A man whose kiss sets music to the stars and whose truest heart is revealed in his gentleness with the most delicate of creatures; his cat. What will losing her heart to her sworn enemy cost her? And when a life-altering truth is revealed, what will stop her from killing him?

My Thoughts:  I got lost, once again, in the Dragon flying world created by author Paula Quinn. I read the first of the series, Scorched, and enjoyed continuing the series with Ember. If you are a dragon lover, one who faces danger head-on, you are going to love this series!

Marcus Aquara, who had been the last ancient Drakkon, had been tricked, shot from the sky.  He became a man (book 1) and found his life mate, Samantha.  Are there no more Drakkon? Garion is the last Gold Drakkon, all others destroyed. He’s young, only 26 years, his egg found and hidden with Marcus’s family until he grew and became a man/Drakkon.  To protect his family, he moved far away. He is being hunted by friends (for him to change them to Drakkon so they can soar in the sky) and foe (those who want to exterminate the last remaining Drakkon).

Fourteen years previous, Helena and Jacob, as young children, watch their home and Drakkon descendants destroyed by one magnificent and frightening site – a Gold Drakkon angered and seeking revenge upon the death of his friend, Thomas White. Thomas had been changed from a Drakkon to a man by the Phoenix Amber.  But he had a chance to change back through special powers the newly discovered Gold Drakkon had, which was his undoing, and instigated the events to follow.

Garion, the Gold Drakkon, vowed never again to change another person to Drakkon.  It was too dangerous, for both the Drakkon and humans.  Drakkon does not engage in emotion or what is right or wrong.  He wants, he takes! Garion even has a hard time keeping himself in the form of man, for he fights the change every day—to soar the skies.

After the death of Patrick White, Helena and Jacob’s father, the truth remains hidden and untruths are revered as true until a day when Ellie, Garion’s adopted family’s daughter meets Helena and Jacob.  Helena and her brother were a part of The Bane, very skilled and ready to kill any Drakkon they find.

Garion lives alone, except for his cat, Catrina, whom he loves.  It isn’t a simple choice of being a Drakkon where humans and these rulers of the sky exist in harmony.  No, the Drakkon nature doesn’t include the kinder emotions.  It is dangerous to even consider a mate for Garion.  He must choose isolation.

Garion used the treasure of Marcus and Thomas to good purpose and to protect himself. Garion is guileless, a man of kindness and loyalty. When he hears from his ‘sister’ she’s been in contact with the Whites, possibly part of The Bane group, he fears her safety, dashing back to New York to protect her.

This book puts us further into the realm of the Drakkon.  Even though Garion feels the pull toward Helena, sparks fly between them, he must deny himself. Helena White would willingly seek his death.  She is an intelligent woman, seeking the truth, as we follow the story. With her inner struggle, she finds Garion speaks the truth.  Once she discovers the truth does she continue to fight him, or fight for him?

Lots of excitement in this series.  The world is marvelous, suspenseful and all believable. Garion is the only known Drakkon who can change a Drakkon to a man, and a man to a Drakkon.  Needless to say, there are many generations of transformed Drakkon who want to be Drakkon again.  The urge to fly in the heavens is something they all wish they could have again.

A fascinating world of heartache, danger, greed and power await you.  How can true love exist with so many untruths spread among its descendants? Does love count for anything?

I am a lover of books, both reading and writing. 2018 marks the beginning of my own journey from writer to published author. This blog will showcase various authors' thoughts on the elements of novel crafting, and my attempts to find my voice in writing. While journaling this journey, I hope to encourage others to follow their dreams. Book reviews continue as I have the last four years, only making time for my new pursuits.
View all posts by eileendandashi →
This entry was posted in Book Reviews, Fantasy, Fantasy Romance, New Book Release and tagged 5-Star Book Review, Ember, Paula Quinn, Rulers of the Sky. Bookmark the permalink.