Review: HOW TO LOSE A HIGHLANDER by Michelle McLean — beginning of a new series — releasing soon. 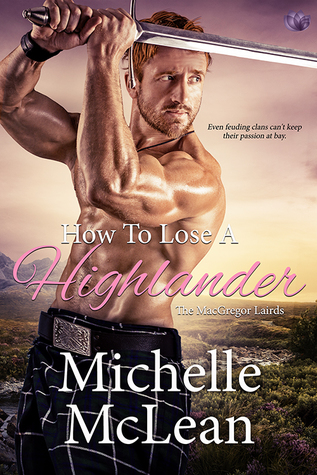 Publisher’s Summary: Forced into marriage by their king in order to stop years of inter-clan feuding, Sorcha Campbell and Malcolm MacGregor are each determined to drive the other away. Malcolm knows he can never trust his new shrewish wife, despite the fact that everything he observes seems to prove that she’s not only trustworthy, but utterly perfect for him. Sorcha knows she can never let her guard down around the man she believes betrayed her father, yet the longer she’s with him, the more she discovers he is nothing like she was led to believe. They’ll have to fight their way through past prejudices and their own determination to destroy their union in order to gain their perfect HEA in this Taming of the Shrew meets How to Lose a Guy in 10 Days tale.

My Thoughts: With a B.S. in History, M.A. in English,  a sense of humor by a woman who loves a happy ever after, Author Michelle McLean pens an entertaining tale.

Taking a feud of long-standing between the Campbells and the MacGregors, she weaves a tale which will keep you laughing, if for nothing more than the heated banter between Sorcha Campbell and Malcolm MacGregor.

King Charles II is tired of this feud.  He wants it to end, therefore commands this marriage to take place.  Malcolm doesn’t want to displease the king, for he is a friend and he’s been good with the MacGregor clan.  He cares not to have the king’s wrath and lose his standing.  However, it isn’t below him to think of ways to get this marriage annulled, particularly since his new wife makes him wish he didn’t have ears. His plan is to have her proclaimed insane. He feels a bit guilty about it, but values his freedom above all.

As Malcolm wants his freedom, so does Sorcha Campbell.  To be wedded to the enemy?  Never!!  She and her maid, Berta, work up a scheme which backfires a wee bit.  Well, maybe a lot!  Her plan is to ask for an annulment on the grounds of her new husband unable to consummate the union.

When I wasn’t laughing, I was rolling my eyes–scenes very cleverly written.  These two totally deserve each other! Malcolm just wants to go back to the Highlands – alone.  But it doesn’t work out that way.  Sorcha’s duplicity very nearly gets herself imprisoned. Malcolm saves Sorcha from herself thereby sealing his fate — at least for the near future.

Malcolm is honorable to the end, although it may just kill him.  Sorcha has a change of heart.  Maybe she could live with Malcolm, but her maid has a poor influence on her, making her doubt Malcolm’s intentions. Malcolm has little faith in his new bride and easily thinks the worst of her.  Can these two ever move forward, already? Outside forces create more havoc.  This adds up to one fast-paced battle between Sorcha and Malcolm.  Eventually, both hearts are ensnared, giving the reader a most satisfying happy ever after.

Review copy provided by the publisher and NetGalley for a fair review.

I am a lover of books, both reading and writing. 2018 marks the beginning of my own journey from writer to published author. This blog will showcase various authors' thoughts on the elements of novel crafting, and my attempts to find my voice in writing. While journaling this journey, I hope to encourage others to follow their dreams. Book reviews continue as I have the last four years, only making time for my new pursuits.
View all posts by eileendandashi →
This entry was posted in Book Reviews, Highland Romance, Highland Stories, Historical Fiction, Historical Romance, New Book Release and tagged Book Review, Historical Scottish Romance, How to Lose A Highlander, Michelle McLean. Bookmark the permalink.