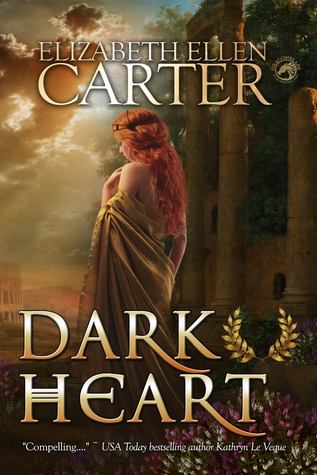 Can love survive a dark heart?

A series of ritual murders of young boys recalls memories of Rome’s most wicked emperor. Magistrate Marcus Cornelius Drusus has discovered the cult extends to the very heart of Roman society.

Despite his personal wealth and authority, Marcus is a slave to his past – conflicted by his status as an adopted son, bitterly betrayed by his wife and forced to give up his child.

Kyna knows all about betrayal. Sold into slavery by her husband to pay a gambling debt, she found herself in Rome, far from her home in Britannia. Bought by a doctor, she is taught his trade and is about to gain her freedom when her mentor is murdered by the cult.

When the same group makes an attempt on her life, Kyna is forced to give up her freedom and accept Marcus’ protection. With no one to trust but each other, mutual attraction ignites into passion. But how far will Marcus go for vengeance when he learns the cult’s next victim is his son?

Can the woman who is free in her heart heal the man who is a slave in his?

My Thoughts:  The cover is mesmerizing and that, in and of itself, urged me to step into the world Author Elizabeth Ellen Carter pens.

This is not my normal read, although I am a historical fiction reader.  That said, it held lots of what I’d like to see in a story–an in-depth social understanding of the times. I haven’t read this author before. The story is more than a romance. It is a story where man and woman face their greatest fears, propelled to succeed in their search for justice in an epoch where seldom we think.

It is set in a time I don’t often find stories.  I like how the author used words rarely used and I had to look them up.  It helped authenticate the setting.

The story takes place in biblical times when the insurgence of a new religion, Christianity, put Rome on edge. Another insurgence of a cult, Elagabalus, the holy sun god, stretches its evil fingers throughout the Roman Empire, preying on young boys. Their main object is power, pure and simple. They want control of the Empire, these clever men, but they are cautious and difficult to catch. Each man is held to the other’s secrets through blackmail.

Marcus Cornelius Drusus, praetor of Rome and magistrate, has a past he rather dismiss.  Yet, it helps the reader understand who the man is. His role now in Rome is to find justice for those who are wronged. This is a time where slaves are given their freedom, or not, and evil roams the land demanding control of the people and their minds.

Kyna, sold into slavery by her husband to pay a gambling debt, was purchased by Philomen, a man of Medicine.  He needs a servant to help run his home, however finds Kyna full of intelligence and interested in his trade.  The relationship changes from slave to that of apprentice.  And from apprentice to that of a daughter.

When Philomen is brutally killed in his surgical room, the slaves are devastated, because they love him.  He was a very good man. Marcus Cornelius Drusus is called in to investigate the murder.  Kyna is drawn into the investigation as a possible suspect.  Soon Marcus’s determination to eradicate this cult and the respect, admiration, and eventual deep love of Kyna forges a bond of strength so powerful evil quakes.

This story’s main focus isn’t one of romance.  It is more suspense, delving into faith, and facing the fate which awaits you. There is a purpose to everything under heaven. Yes, the story has a dark side.  It exposes the underbelly of religious hedonists. It also gives me an appreciation of this time in history. Quite a riveting read and one I would suggest to those who enjoy history with all its turmoil and horror.

I am a lover of books, both reading and writing. 2018 marks the beginning of my own journey from writer to published author. This blog will showcase various authors' thoughts on the elements of novel crafting, and my attempts to find my voice in writing. While journaling this journey, I hope to encourage others to follow their dreams. Book reviews continue as I have the last four years, only making time for my new pursuits.
View all posts by eileendandashi →
This entry was posted in Book Reviews, New Book Release, Uncategorized and tagged Ancient World, Dark Heart, Elizabeth Ellen Carter, Historical Fiction. Bookmark the permalink.